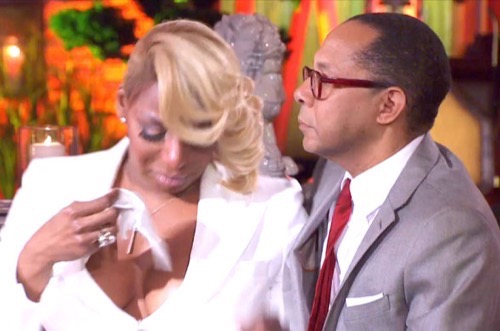 Tonight on Bravo, The Real Housewives of Atlanta continues with an all new Sunday May 10 season 7 episode 25 called “Reunion Part 3” and we have your weekly recap below. On tonight’s episode, NeNe Leakesand Cynthia Bailey discuss the demise of their relationship and if there is any glimmer of hope for a reconciliation. Claudia Jordan and NeNe address their rocky start and attempt to settle their differences.

On the last episode In Reunion Part 2, the women discussed how friendships had shifted and created a new group dynamic, which lead to a tearful Kandi as she and Phaedra addressed the cracks in their relationship. Accused of stirring the pot, Cynthia speaks out about the backlash she’s received for being more outspoken than ever. Finally, the men joined the mix to give their take on many of the hot-button issues from the season. Did you watch the last episode? If you missed it, we have a full and detailed recap right here for you.

On tonight’s episode as per the Bravo synopsis, “NeNe and Cynthia discuss the demise of their relationship and if there is any glimmer of hope for a reconciliation. Claudia and NeNe address their rocky start and attempt to settle their differences. Therapist Dr. Jeff joins the ladies to rehash their group therapy session and in a shocking turn of events, NeNe breaks down in tears and opens up to the group that leads to a surprising conclusion.”

Cohen asks Peter if he and NeNe have flirted. He says he thinks the two of them have similar personalities, but nothing inappropriate happened. He says the same of Kenya and Apollo, and that he thinks everyone owes Kenya an apology.

Gregg flat out asks Peter point blank what he would say if someone came up to him and asks if he flirted with his wife. Peter says no.

Cohen asks when the last time they got busy. Kandi says it was two days ago, and everyone claps.
They say that they’re working on having a baby.

The death of Todd’s mother from a stroke is discussed. He and Kandi say that everyone supported them during the grieving and funeral.

A viewer asks if their marriage can survive the death of Todd’s mother given that there may still be some leftover resentment. Kandi says that is has actually made it stronger, and Todd agrees.

A viewer asks Phaedra what she thinks of Kandi and Todd’s personal issues and the fact that they reveal so much of their relationship on TV. Phaedra says she respects that and it’s their business. Kandi says they may have revealed too much on the show. She says she is an open person, and is often more private with others’ information than her own.

Gregg leaves with the insight that faults are like headlights on a car. You can only see the other person’s.

The disintegration of Cynthia and NeNe’s friendship is shown. Cohen says she doesn’t really get why their friendship ended. NeNe says when everyone went to Mexico, she and Cynthia talked immediately after their fight. She says she never wanted Gregg to say anything to Peter. She says it was not a problem until it aired on TV. She suggests that someone may have said something to Cynthia. She then says she wrote something on her blog which caused them to fight further.

She says that then, at the reunion, she found out that Cynthia asked to be moved. Cynthia says she did not request to change her seat and that she didn’t know they had the power to change their seating. “You don’t,” Cohen says.

Cynthia then goes through her version of the events, saying that things between them weren’t the same after she read the “shade” in NeNe’s blog post, which was never addressed between them being on vacation together in Mexico and Las Vegas. Cynthia accuses NeNe of trying to get her thrown off the show, which NeNe denies.

A clip of her saying that Cynthia doesn’t bring anything to the show is shown. (Cohen had asked her who she thinks should be removed from the show.)

Cynthia says that NeNe tried to take food off her table. NeNe says she made this whole story up and rode it out on TV.

Cohen asks Cynthia about when she and NeNe hugged eachother in tears, saying they had love for each other.

Cynthia says it was very emotional because they were close like sisters, adding that she talked to NeNe more than her actual sister. She says she hopes they can be cordial.

NeNe says she felt like Cynthia put out the other girls and the viewers that she wasn’t a good friend, which bothered and hurt her. When asked if she still loves her, she says she wishes her well.

Porsha’s transformation is shown and she is asked if she has changed. Porsha says when you’re a wife, you tend to mimic what would please your husband (damn, that’s sad). She says she was very submissive. Now, she is single, free and able to go to the strip club.

Cohen asks her how she felt seeing the movie Selma (her grandfather was Hosea Williams, a civil rights leader who is depicted in the film). She says watching the movie made her very proud, and details the experience going on a march at six years old with her grandfather, where people threw stones and hurled slurs at them.

Cohen asks Kandi why she said Claudia read NeNe like Hooked on Phonics during their fight. Kandi says Claudia had a lot of comebacks. She says she isn’t quick like that, so when she sees others do it, it’s funny to her.

The host asks Claudia what she thought about NeNe’s remark that her clit left her body. Claudia says she thought it was kind of lame and NeNe doesn’t know anything about her to be able to say that. NeNe simply says that it’s on TV and what you see is what it is.

A viewer says they were “appalled” by NeNe calling Claudia a “half breed” in Puerto Rico. The viewer calls the remark racist. NeNe says that Claudia never said anything about that comment, only talking about being called a whore. She says that she made that comment in the heat of the argument, and that during arguments people often say things they don’t mean. She says Claudia is always referring to the fact that she is mixed race and light skinned, which was the source of the comment.

Claudia says she comments about her race because she has not felt accepted throughout her life. Cohen asks NeNe if she would apologize to Claudia for the remark.

NeNe says she will apologize to the viewers she has offended with the comment. She says she has friends of all races, and she herself may even be mixed. As for Claudia, she says again that Claudia was never butthurt about the racial comment.

Cohen asks Cynthia why she said that the group dynamics in the Philippines were good because NeNe was not there. Cynthia says she felt like one of the things that made the trip successful was that the people were able to use what they learned in the therapy session to get through their issues.

The counseling session NeNe set up (and walked out) of is discussed.
Dr. Jeff has come up on stage.

She says she has never wanted to be a victim despite all of the things she has been through, but that the others in the group are always whining about their issues.

NeNe starts crying when Porsha and Kandi start fighting over the details of how the counseling session transpired.

Dr.Jeff stops everyone, saying everyone needs to listen to what NeNe has to say. NeNe quietly says that she has nothing to say.
Cynthia tells NeNe that she is so proud of her and knows her life hasn’t been easy. She says her heart completely opens to her.
Kenya says that she feels NeNe thinks everyone is against her and that they don’t like her, but they do not want to stay in the same place anymore and would like to move on. She says that hearing her story, she feels they have more in common than NeNe would like to admit.

As she continues to speak, NeNe stands up, still crying.

Dr. Jeff restrains her, and she says she can’t talk about her mom. The others get up and surround her. Kandi doesn’t seem to give a shit. Dr. Jeff, Porsha and Phaedra help NeNe, who is still sobbing, to get off the stage. She goes outside, where they, Cynthia and Gregg comfort her.

Back on stage, Kandi is confused as to what set NeNe off. Kenya says she thinks NeNe is just in pain, and that sometimes a person just gets tired and breaks down. Claudia says she thinks this has been a breakthrough.

Gregg explains to Cohen backstage that NeNe’s mother had five children, but sent NeNe and her brother to live with their aunt. He says NeNe has always wondered why she was one of the two to be sent away.

Everyone returns to the stage.

Cohen says he feels like he just witnessed a breakthrough moment.

NeNe says she thinks people think she’s never been through anything in her life.

Cynthia says she thinks what she just saw was her ex-friend having a real moment, which is hard because she’s survived so much. She tells NeNe that she has always respected her hustle and success because she knows NeNe could have given up.

Dr. Jeff says he feels that NeNe doesn’t feel like she’s gotten the recognition and respect for the work she has done, and that there are people who haven’t appreciated what she has done for them. He says that he thinks this group doesn’t want to do that, and wants to give her the respect she deserves.

Kenya tells NeNe that she respects her for showing her vulnerability, and tells her that all of her attempts to reach out to NeNe have been sincere.

Cynthia says she relates to NeNe, and if the cameras weren’t there they could probably have a heart-to-heart and cry it out and laugh about it later.