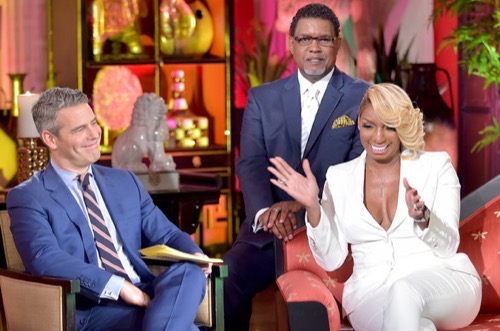 Tonight on Bravo, The Real Housewives of Atlanta continues with an all new Sunday May 3 season 7 episode 24 called “Reunion Part 2” and we have your weekly recap below. On tonight’s episode, In Reunion Part 2, the women discuss how friendships have shifted and created a new group dynamic, which leads to a tearful Kandi Burruss as she and Phaedra Parks address the cracks in their relationship.

On the last episode Part 1 of 3. The Atlanta ladies reunited to address the dramas of Season 7. Included: NeNe and Kandi clash; Phaedra reflected on her emotional season and stuns the group with a revelation; and Claudia and Porsha faced off once again. Did you watch the last episode? If you missed it, we have a full and detailed recap right here for you.

On tonight’s episode as per the Bravo synopsis, “In Reunion Part 2, the women discuss how friendships have shifted and created a new group dynamic, which leads to a tearful Kandi as she and Phaedra address the cracks in their relationship. Accused of stirring the pot, Cynthia speaks out about the backlash she’s received for being more outspoken than ever. Finally, the men join the mix to give their take on many of the hot-button issues from the season.”

Cohen asks Kenya about the challenge NeNe made to Kenya that she make a $20,000 donation to a cause of her choice and NeNe would match it. Kenya says she wrote her $20,000 check and confirmed its receipt. When asked if she sent hers, NeNe says she will do it when she gets ready.

Kenya says NeNe talks about being a rich bitch and having jobs and more money than anyone else on the stage, yet won’t give money to the kids in Detroit who need an education. She says that says a lot about NeNe’s character and that she doesn’t think NeNe will ever give a check.

NeNe says she thinks Kenya is making a mockery out of charity by posting a photo of it on social media. She says she is very poor and when she scratches up her $20,000 she will write the check and post it on Twitter because this rich bitch is poor.

Cynthia’s personality transformation this season is discussed. She says in a group like this it’s important to have a voice and to be a bitch when it’s necessary.

Cohen asks her and NeNe if they think she was “up NeNe’s behind” when they were friends. NeNe says Cynthia has always been outspoken, but when she is involved in a situation people focus on her.

Cynthia says Phaedra forgave NeNe for calling her “the head doctor,” but didn’t accept her apology in the Philippines. When Cohen asks Phaedra why she didn’t accept the apology, she says it was because she didn’t find it genuine.

A caller asks Kandi if she really compares a tour being cancelled to Phaedra’s husband going to prison. She says she had other things going on in her life, including someone in her own family going to prison. She says she was caught off guard by the fact that Phaedra was telling people she was feeling like she wasn’t supporting her. Kandi admits she didn’t text her every day, but it’s not as if months went by without contact.

Phaedra says they used to talk regularly until the situation started happening, at which point things became different. She says she felt like it was strained and that she wasn’t being invited to things, nor was Kandi texting or calling her much.

Kandi says the only event she was aware of was a Bar One event at which Phaedra called her, but she didn’t answer, planning to call back the next day. Then, Phaedra snapped at her. She says little did Phaedra know, she confronted Apollo that night on her behalf.

Kandi says she didn’t have a problem with apologizing for not talking to Phaedra enough She says that when she told Phaedra her play had been canceled, Phaedra said she had seen that somewhere but had never called her. She says she feels the friendship is one-sided if Phaedra is always expecting things without giving. She tears up, saying that she cleared her schedule and drove hours to Phaedra’s graduation. “I said I wouldn’t do this,” she says as she dabs her tears. “I’m so mad at myself right now.”

The cast members’ boring and irrelevant husbands come up on the stage.

Cohen asks NeNe’s husband what his thoughts are on the comments Cynthia’s husband made about NeNe.
He says he is a “man’s man” who doesn’t involve himself in women’s business, and that words said about his wife are just words. He says NeNe is a very strong woman, and if she needs him she can look over her shoulder as he is never far away.

The subject changes to the various African men cast members with whom have allegedly been having affairs.
A viewer says she has seen a photo of one of Porsha’s boyfriends and he was old enough to be her grandfather, and Porsha asks if she was in the picture, saying that was made up.

Cohen asks Phaedra about the rumors regarding her alleged affair with a “Mr. Chocolate.”  Phaedra says it’s false and “absolutely crazy,” and that she has never done anything to compromise her marriage. When asked what was in the text messages, Phaedra says they are made up.

Cohen asks why Apollo told everyone the rumor. She says she thinks when you are in a situation like that possibly leading to divorce, all bets are off.

Kandi says she thought that after all Apollo put her though, if Phaedra found someone else he would deserve it. However, she didn’t form an opinion either way as to whether the rumor was true.

Kenya says when she saw the text messages, they existed and nothing was doctored despite what Phaedra says.
She then goes into listing rumors she claims Phaedra has started about her, including that she tried to hook up with Apollo and that she has a fake ass (“You do have one,” Phaedra says).

She accuses Phaedra of getting her boobs done while she was going through all this strife with her husband, and Phaedra asks her if she’s in the boob business now. Kenya goes on, telling Phaedra to be real for once.

Phaedra tells Kenya that the first day they met, she flirted with her husband and continued to flirt with him in front of everyone. She says Kenya then continued to text him, even after Phaedra told her to stop.  Kenya says she already apologized for that last year and took full responsibility.

She says everyone flirts, saying that NeNe flirted with Peter. This sets NeNe off. “I never flirted with Peter, let’s be clear,” she says.  She tells Kenya to ask Peter, and not to disrespect her and her husband. “I just did,” Kenya responds.  “This isn’t Phaedra,” NeNe warns her as they continue to yell at each other.