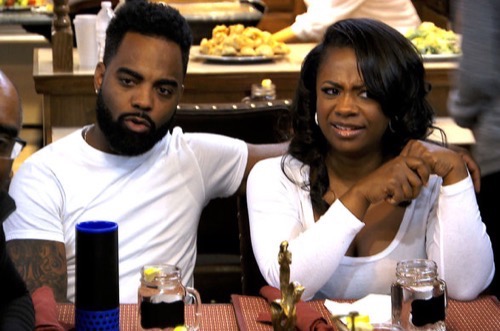 Tonight on Bravo, The Real Housewives of Atlanta continues with an all new Sunday May 17 season 7 episode 26 called “Mending and Blending” and we have your weekly recap below. On tonight’s episode, Kandi Buruss-Tucker and Todd Tucker decide to take a luxurious vacation to get some quality time in with their families on the snowy slopes of Colorado.

On the last episode NeNe and Cynthia discussed the demise of their relationship and if there was any glimmer of hope for a reconciliation. Claudia and NeNe addressed their rocky start and attempt to settle their differences. Therapist Dr. Jeff joined the ladies to rehash their group therapy session and in a shocking turn of events, NeNe broke down in tears and opened up to the group that lead to a surprising conclusion. Did you watch the last episode? If you missed it, we have a full and detailed recap right here for you.

On tonight’s episode as per the Bravo synopsis, “Kandi Buruss-Tucker and Todd Tucker decide to take a luxurious vacation to get some quality time in with their families on the snowy slopes of Colorado. Coming off of a roller coaster of emotions, a family ski trip seems like the perfect way to mend broken relationships and blend Kandi and Todd’s families together even more. While the Atlanta moguls take on the slopes, they encounter a few bumps along the way — and it becomes clear not everyone is keen on playing in a winter wonderland of snow.”

Once again Kandi and Todd did something stupid. First they jumped on the Apollo bandwagon (are they even still in communication with him or did prison change that) and now on tonight’s special they are literally inviting trouble by bringing their whole family with them on vacation.

Going in even I knew the epic fight just waiting to come was sure to be more entraining than Pacquiao vs Mayweather. And that was before I saw that both Mama Joyce and Carmon had been invited to the same location.

Though to be fair on tonight’s episode, Mama Joyce did say she was going to be on her best behavior. And there was no reason whatsoever to doubt her. After all prior to this trip, she did seem to be actually bonding with Todd.

His mother had recently passed away and knowing loss, herself, Mama Joyce stepped in to play a supportive maternal role.

Yet Carmon? Really! It was one thing for Kandi and Todd to feel like they needed a family vacation. Because honestly who could blame for needing some kind of reprieve after this latest season of the Real Housewives of Atlanta? But by voluntarily spending time with both their blended family and her friends – those two asked for the drama.

And that’s exactly what they got!

Things began going wrong early on in the planning stages. Apparently Todd tried to be cheap when it came time to buying the girls their ski jackets. For some reason de didn’t understand why Riley (a growing girl) couldn’t wear the same jacket she bought two years ago. Yet, for someone who’s counting pennies, why did he feel it necessary to invite his personal assistant from the west coast?

As for Matthew the assistant, he sort of came across as a nuisance. In fact I’ll go as far to say that it would have been a better idea to leave him at home.

Except for his direct boss, he rubbed everyone the wrong way. For it looks like he arranged the trip so that, funnily enough, everyone that wasn’t either Kandi, Todd, Riley, or Kaela were shortchanged. And so Kandi’s aunts ended up wanting to go home on their first day.

The Tuckers got to drive in a private car to the resort but everyone else was stuck on a bus. Then at the hotel, the Tuckers got great rooms meanwhile the others, like the elderly aunts for instance, had to walk all the way out to their own rooms. During which there was more than one person heavily breathing while they climbed a lot of steps.

Although the hotel rooms might not have been solely Matthew’s area like transportation was. Sorry to be ambiguous but the answer to planned what is currently up in the air.

Anyways, Matthew messed up but Carmon Don Juan were also responsible planning the trip thus they too should have thought about the aunts and their comfort. Matthew at least tried to later make it up to the aunts by offering to rub their feet in order to put them in a better mood yet that was weird of him. Extremely weird. Hence his offer was turned down.

Not that it would have done much if rubbed some old woman’s foot.

People were angry and it was about more than a car ride or a hotel room. Someone, one of the assistants, had made Kandi’s family feel like she doesn’t care about them anymore. And it seems like this instance wasn’t the first time they felt like this.

Sad fact is Kandi hasn’t been calling them. She’s forgotten birthdays and to be frank her whole family feels like they’ve been abandoned since she married Todd. So that’s what was bubbling under the surface and it just all came out after the hotel room issue.

Todd came into the picture and Kandi changed.

Even Phaedra said something similar during the finale show. She said her friend hadn’t been reaching out as she once would have. And then here’s Kandi family telling her that she distanced herself. So really what is up with Kandi?

She uses work as an excuse but that doesn’t explain the 180 this past year. And despite her family’s beliefs, it can’t have all been because of Todd.