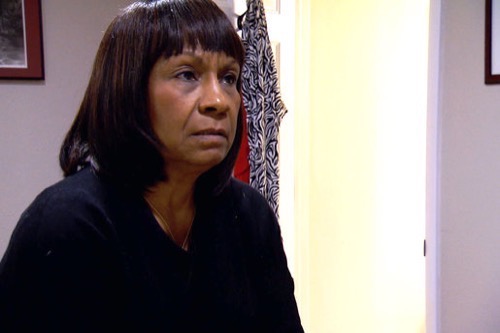 Tonight on Bravo, The Real Housewives of Atlanta continues with an all new Sunday June 7, season 7 episode 28 called “A Family Affair” and we have your weekly recap below. On tonight’s episode, when Kandi  Burruss brings Mama Joyce and her personal assistant/long time best friend, Carmon together to hash out their differences, the conversation escalates into a hair-raising argument leaving Kandi wondering if their relationship is a lost cause.

On the last episode the family fun continued in the snowy mountaintops of Colorado as everyone tried to mend their differences. Tensions were high when Todd was blamed for Kandi’s change of attitude. Meanwhile, Matthew continued to outshine Carmon, resulting in Mama Joyce sharing her concerns surrounding the situation. Boiling points were reached when Carmon was put in the hot seat, leading to her and Kandi hashing out their own issues. Will Carmon ever be able to resolve things with Kandi and Mama Joyce, or will the falling out between them be rehashed to the point of no return? Did you watch the last episode? If you missed it, we have a full and detailed recap right here for you.
On tonight’s episode as per the Bravo synopsis, “when Kandi brings Mama Joyce and her personal assistant/long time best friend, Carmon together to hash out their differences, the conversation escalates into a hair-raising argument leaving Kandi wondering if their relationship is a lost cause. Todd, Aunt Bertha and Aunt Nora bond over a trip to a legalized marijuana dispensary and DonJuan sets the record straight with Todd’s assistant Matthew regarding his role in Kandi’s business life. On the final night of their trip, Kandi’s daughters Riley and Kaela teach both families exactly what it means to forgive and forget, and the “mending and blending” finally commences once and for all.”

Kandi takes Carmon up to her mother Joyce so the two can resolve their tension, which she thinks is mainly because the two have never discussed any unresolved feelings they may still have.

Carmon says nothing ever happened between her and Todd. She says Joyce’s story constantly changed. Joyce says Dede’s husband told Bertha something was going on between the two of them. Carmon talks about how Joyce has known her since she was 12 years old and has called her her other daughter. Joyce, however, says she didn’t know Todd for that long.  Joyce says in confessional that a drunk man will stick his penis into any hole. Then they start screaming back and forth about the issue of Carmon allegedly saying she wanted Kandi’s hair.

They both end up shaking hands in agreement that they are willing to take lie detector tests to prove that they are telling the truth.

Carmon says in confessional that it’s hard for her to accept the state of her relationship with Joyce, who used to be like a mother to her.

Kandi bursts in as the two continue screaming at eachother, and says that this has to end. She states that Carmon never slept with Todd, and Joyce says that Carmon agreed to take a lie detector test and so she should take it and let the results reveal the truth.

Joyce says in confessional that she has heard the rumor about Todd and Carmon from multiple sources, so until she sees the results of the lie detector test, she won’t be convinced otherwise. Kandi asks her mom why she blames Carmon and not Todd even though they both allegedly participated in the activity. ‘Cause he’s a man. A man won’t do any more than a woman let him,’ she says like a proper old person.

Kandi tells her that she needs to let go of what people have told her. Camron talks to Kandi’s aunts about her conversation with Joyce. She says they didn’t have problems until she started working for Kandi and that she wonders if the fight is all about the rumor or if there’s something more. Kandi’s aunts reveal that Joyce had surgery after a stroke which affects the way she acts. One of them tells her that Kandi is going to have to tell Joyce that she won’t have anything to do with her husband or employees.

Todd’s assistant, Matthew, and Joyce talk. Matthew says he doesn’t mind assisting Kandi and Todd both, and that he wants to be the type of assistant that is indispensable. Matthew says in confessional that he thinks Don Juan and Camron are too comfortable with their jobs. Joyce complains that she isn’t informed about events that Kandi attends. She says she would understand if it were just Kandi and Todd, but if Kandi can bring someone else, she should be able to bring her mother.

Todd, Nora and Bertha go to a dispensary. “Honestly, I was shocked,” Nora says in confessional. “They were selling marijuana like they sell chicken.”

Matthew has had problems with DonJuan and Carmon not coordinating on the trip, he says in confessional. He calls their behavior “pathetic.”  He talks to the two in their cabin. Matthew tells the two about his conversation with Mama Joyce, saying it made him better understand what kind of person DonJuan is.

DonJuan says that if he’s standoffish, it’s because he knows how that dynamic works. Carmon agrees that he should be careful with Mama Joyce.

Matthew says he wants to make a truce so the three of them can start fresh after the trip, and they all shake hands and hug it out.  Matthew says in confessional that when he moves to Atlanta, he’s taking both of their jobs.

Kandi and Todd spend some alone time together. Kandi says in confessional that she doesn’t know if things will ever be right with her mother and Camron.

Todd says that when he swore on his mother’s grave that he didn’t sleep with Camron, it may have gotten through to Joyce.

Everyone on the trip gets together, chatting and making smores.

Carmon gives a speech, addressing Mama Joyce and saying that she ‘doesn’t want to continue like this.’ Mama Joyce agrees, saying that from this point on she wants to move on. Mama Joyce then gives a touching speech to her family, saying she wants to be the best grandmother her grandchildren could ever have and that she will just be Kandi’s mother. Kandi also gives a speech, saying she is going to make her employees feel that they are not being taken for granted.