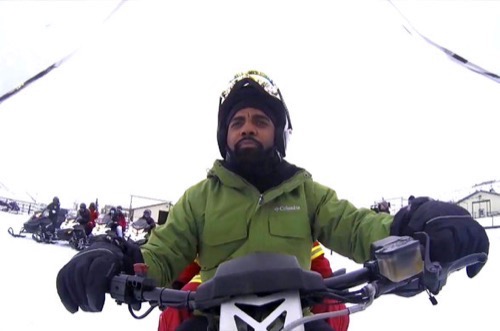 Tonight on Bravo, The Real Housewives of Atlanta continues with an all new Sunday May 31, season 7 episode 27 called “Trip Down Mending Lane” and we have your weekly recap below. On tonight’s episode, the family fun continues in the snowy mountaintops of Colorado as everyone tries to mend their differences. Tensions are high when Todd is blamed for Kandi Burruss’ change of attitude. Meanwhile, Matthew continues to outshine Carmon, resulting in Mama Joyce sharing her concerns surrounding the situation.

On the last episode Kandi Buruss-Tucker and Todd Tucker decided to take a luxurious vacation to get some quality time in with their families on the snowy slopes of Colorado. Coming off of a roller coaster of emotions, a family ski trip seemed like the perfect way to mend broken relationships and blend Kandi and Todd’s families together even more. While the Atlanta moguls took on the slopes, they encountered a few bumps along the way — and it became clear not everyone was keen on playing in a winter wonderland of snow. Did you watch the last episode? If you missed it, we have a full and detailed recap right here for you.

On tonight’s episode as per the Bravo synopsis, “the family fun continues in the snowy mountaintops of Colorado as everyone tries to mend their differences. Tensions are high when Todd is blamed for Kandi’s change of attitude. Meanwhile, Matthew continues to outshine Carmon, resulting in Mama Joyce sharing her concerns surrounding the situation. Boiling points are reached when Carmon is put in the hot seat, leading to her and Kandi hashing out their own issues. Will Carmon ever be able to resolve things with Kandi and Mama Joyce, or will the falling out between them be rehashed to the point of no return?”

The first night was a bit heavy but by next morning things had appeared to finally be cooling down on this vacation.

Apparently the aunts and even Cousin Weenie all had something to say. But once they got things off their chest or to use a better phrase finished ranting then all Kandi wanted to do was to let matters drop. Her husband on the other hand was the one that felt like maybe he should talk with her family as well. You know to clear the air. Particular as it was his name that continued to be dragged into the conversation.

Kandi’s family did in fact blame him for their recent estrangement with Kandi. They said she changed the moment she got married. And that most of them rarely hear from her now.

But somehow Kandi talked Todd into letting some of the issues from the night before slide. She said they wouldn’t be able to win the argument and that it was for the best if just carried on as if nothing had ever happened. Yet something did and though he initially kept silent – Todd still wasn’t happy with the way Kandi’s family were treating them.

Although to be fair Mama Joyce, who used to be a major thorn in their signs, did show signs that she had changed from last year.

She was a lot calmer and Todd’s assistant Matthew ended up benefitting from that. It seems it was the assistants’ jobs to create an ititnery however Matthew was the only one that cared enough to actually do any work. Don Juan and Carmon were just along for the free vacation. So it was up to Matthew to take all the harder jobs. Such as taking Mama Joyce and her sisters to go shopping.

And you know what? They didn’t really mind him. Sure Mama Joyce felt it should have been Carmon’s or the woman’s job to take them shopping. But after a while Matthew was alright.

Meanwhile Carmon and Don Juan took the cushier job of going skiing with everyone else. And eventually Kandi wondered why Carmon couldn’t be as good at her job as she was at skiing.

And speaking of what came up after everyone was splintered, Todd talked to his uncle and his brother and they told him he had to be a man about the situation. They said he had to put his foot down and tell Kandi’s family to back off. Because, in their eyes, it’s always something with her family.

They think it might have to do with jealousy and that once Todd clears the air then everything can be fine. But that’s how Todd and his family handle things. Kandi’s family is a whole another matter.

They had moved pass the issue and as it turns out it wasn’t about jealousy. Kandi’s family were hurt that she seemed to drop them by the waste side since their marriage. And they weren’t the only ones to have said that about Kandi.

So where’s there’s smoke, there’s fire. And after having addressed that issue with Kandi, it wasn’t up to Todd to tell them to calm down. Thus Weenie made it clear to him that they don’t have a problem with him. They actually have a problem with how they’re being treated and that means he has nothing to do with what happened.

And after Todd wisely decided to drop it, the family went back to having fun.

They completed their list of activities and later, at dinner, Matthew once again shined in his role. Apparently he had remembered they were going to have barbeque pork for dinner. So he brought along disposable tooth brushes to in order help everyone out afterwards. Seeing as pulled pork can easily end up getting stuck in their teeth. But despite his kind gesture, Carmon and Don Juan had mean girled him for it.

Though that was nothing new.

All throughout the vacation, Don Juan and Carmon threw sarcastic remarks at him and made him do the hardest jobs. Also he do most of the work, that should have been shared, by himself. So when they kept going on about him being a suck up at dinner – Riley surprisingly asked them to stop.

She said she was kind of tired of the fighting and that it wasn’t Matthew’s fault that he was doing all of their jobs better than they were.

And so Kandi chose to address that issue with her assistants after dinner. Earlier she didn’t want to cause a scene in front of everyone but it appears that she does believe Carmon and Don Juan could step it up some. And that they could learn a few things from Matthew.

So, first thing first, Kandi asked Carmon to talk to Mama Joyce. She said those two needed to clear the air as much as Mama Joyce and Todd at one point needed to. But asking those women to speak to each other was just inviting trouble.

Tune in next week to see how that fight will go down!