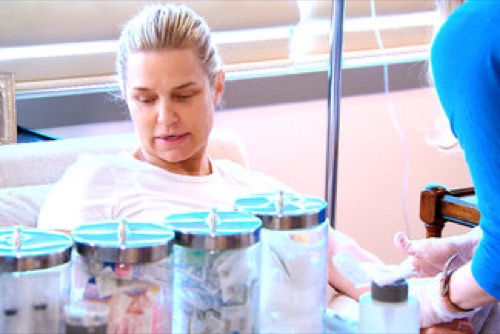 Tonight on Bravo The Real Housewives of Beverly Hills premieres with an all new Tuesday, December  1, season 6 Premiere called, “Life’s a Pitch,” and we have your recap below. On tonight’s episode as always, fun, excitement and gossip permeate the rarified air of Beverly Hills.

On tonight’s episode per the Bravo synopsis “as always, fun, excitement and gossip permeate the rarified air of Beverly Hills. Lisa Vanderpump has been tapped to throw out a first pitch at Dodger Stadium, while Kyle buys $75,000 sunglasses for her store. Unfortunately, real life always has a way of rearing its ugly head. Kyle wonders how to deal with her troubled sister Kim, currently in rehab, and Eileen suffers a loss in her family. In the midst of her Lyme disease struggle, Yolanda shows up for Lisa Rinna’s birthday dinner, but her appearance draws mixed reactions.”

On tonight’s season sixe premiere, the ladies are all in different yet good places in their lives.

Take Lisa Vanderpump. She was stepping out of her comfort zone for a good cause. As many of us know Lisa is a big supporter of the LGBT community and so the Dodgers asked her to throw the first pitch in their LGBT game. And as an added rewards Lisa even got to practice her pitch beforehand with the hunky AJ Ellis.

However, despite she has come to stand for, Lisa Vanderpump is still very much Lisa. Meaning she can be kind of shady and will throw a supposed friend under the bus in the blink of an eye. The latter being what she ended up doing with Yolanda.

Yolanda’s Lyme disease had pretty much sucked up her energy and she’s not really looking too good. But Yolanda is trying to remain upbeat and while she admittedly doesn’t go out as much as she used to – her good friends tend to come to her like her friend Angie has done rather than complain like Lisa about the way she kept cancelling on lunches at some restaurants. And funnily enough you wouldn’t think Angie would be the one to prove herself.

Angie is Cody Simpson’s mother and although Cody and Yolanda’s daughter Gigi have broken up – Angie continues to be a particular good friend to Yolanda. And that had made Yolanda feel like she has someone she can rely. So much so in fact that Yolanda later invited Angie to a dinner that Lisa Rinna was hosting but that was going to have most of the other ladies there.

Earlier, Lisa Rinna had been shooting a “Where Are They Now” special for Oprah thought without the actual Oprah there but Lisa didn’t let a little thing like that bother her. Instead she turned it out for her interview and was her normally cheery herself. Although after the interview had wrapped up and she had gotten some time to spend with her teenage daughters, Lisa did touch in with Eileen.

Eileen had lost her father-in-law recently and her good friend Lis wanted to see if she was doing alright. And thankfully she was. Eileen has taken upon herself to redecorate the house and she also has her work on “The Young & The Restless” to keep her busy.

Apparently her character was going to be involved in a love triangle with her daughter and daughter’s boyfriend so that gave Eileen something to laugh about. Especially as once upon a time it had been her that played the daughter in a similar love triangle.

But the dinner that Lisa Rinna was hosting was a good place to just converse and see what everyone had been up to. And unfortunately mostly everyone had something to say about Yolanda’s appearance.

According to the gossip queens, it’s practically a sin to come outside without makeup on in that part of the world. And Lisa Vanderpump for one definitely felt Yolanda could have slapped on something. Even if it was only lip gloss.

However the criticism didn’t stop there. Lisa Vanderpump felt if Yolanda was that sick then she shouldn’t have bothered coming. And Yolanda did have to go home early when she began to feel shaky on her feet.

And once she had gone from the table, Ken didn’t hold back on her appearances. He had been one of the first to tell Yolanda that she looked better and it turns out he was only saying that because he feels like all women liked to be complimented on their looks. Which is really a case by case sort of thing. But Ken felt like that had been his good deed of the day and then he later told everything at the table that she looked horrible.

So way to go, Ken! You once again go too far when you could have stopped at being a gentlemen. Yet he’s part of the package that is Lisa Vanderpump so Kyle and her husband are going to go on a trip with him and his wife next week.

And the promos for then are looking good!