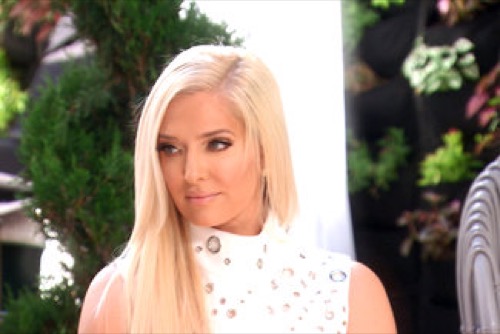 Tonight on Bravo The Real Housewives of Beverly Hills airs with an all new Tuesday, December 29, season 6 episode 5 called, “Will Power,” and we have your recap below. On tonight’s episode the women are intrigued with Yolanda M. Foster’s friend Erika Girardi, whose short skirt and flashy Cartier ring leave a memorable impression. Lisa Vanderpump pays an emergency visit to her veterinarian’s office.

On the last episode, Kyle reflected on her own acting career when her seven-year-old daughter Portia expressed an interest in following in her mother’s footsteps. Across town, Erika and her husband visited Yolanda and David in Malibu before the Fosters headed off on a beautiful vacation. Elsewhere, Eileen and Vincent argued over the proper time to have an argument. Lisa Vanderpump invited the ladies over to show off the surprise mini-horses she got for Ken, but Lisa Rinna had a surprise of her own–a shocking suggestion about Yolanda’s health.

On tonight’s episode per the Bravo synopsis “the women are intrigued with Yolanda’s friend Erika, whose short skirt and flashy Cartier ring leave a memorable impression. Lisa Vanderpump pays an emergency visit to her veterinarian’s office. Eileen inadvertently references Lisa Rinna’s comment about Yolanda’s illness in front of the other women — including Yolanda. Later, on the eve of getting her breast implants removed, Yolanda makes a startling announcement to her children.”

Last week was kind of tense. Lisa Rinna had brought up Yolanda during a day with the girls but she hadn’t been talking about what they could do as friends to help Yolanda through this difficult time. Instead she had brought up Munchausen Syndrome and that said it could be a possible explanation for Yolanda’s systems.

In other words, Lisa had brought up the idea that maybe Yolanda was initially faking the disease but it should be noted that Lisa wasn’t just gossiping. She had overheard something and in addition to what many other people were saying – she pondered the Munchausen idea. And it had made everyone around Lisa feel uncomfortable.

They’re The Real Housewives of Beverly Hills not Orange County and so no one wanted another Brooks situation. Although they did want to foreworn Yolanda. They didn’t want her hearing what they had been discussing form someone else so Eileen felt that Lisa Rinna should talk to Yolanda first.

However the other ladies ended up running into Yolanda long before Lisa Rinna could. Yolanda had wanted to introduce her friend Erika to the girls because she thought they would get along great. And as it turns out she was right.

Ericka was pretty, blond, and she loved pink. So right away Lisa Vanderpump said she might have a real life Barbie doll that she can now play with as an adult.

Erika and Lisa had similar personalities and in fact Lisa wondered why she had never met Erika before. Erika was a performer with several hits in the US, she had money, and a great sense of humor. Therefore things didn’t exactly click for Lisa until she found out that Erika was 44 to her husband’s 76. And that’s when Lisa Vanderpump had her “ah ha” moment.

As if that suddenly explains it.

Erika saw the moment she had stunned the group but she hadn’t let a little thing like that upset her. And she ended up rolling with punches. Going as far to praise her husband because he fortunately doesn’t have to use Viagra.

So Erika clearly fit into the group and the ladies quite enjoyed having her around. But the conversation took a turn after that. Yolanda had brought up Taylor because another friend of hers had told her that Taylor had been openly discussing whether or not she even had Lyme disease.

And despite being very clear about whom she was discussing, Eileen just randomly brought up Lisa Rinna. She went off about how Lisa didn’t mean to say what she did and that Lisa was feeling really bad. And Eileen kept on ignoring the looks she was getting from Lisa Vanderpump and Kyle.

They were trying to tell her that Yolanda had only known about Taylor and not Lisa Rinna but Eileen just didn’t get the hint. Not even when Lisa Vanderpump brought the conversation back around to Taylor. And Kyle jumped it to say that Lisa Rinna wanted to see Yolanda to explain herself.

So when Yolanda eventually left the ladies, she then knew that both Taylor and Lisa Rinna had been talking about her behind her back. And, well, that hurts.

She tried to understand why Taylor would be confused and she did admit that she hadn’t seen Taylor for the past couple of years. But Lisa. Lisa had come over to the apartment and had spoken with Yolanda recently. Hence Lisa’s betrayal hurt more than Taylor’s.

And later Yolanda had still been upset though she had more important things to do. Like preparing for her upcoming surgery. Yolanda had recently done a MRI and a couple of bubbles had been found under her chest bone. So Yolanda was having surgery to remove those bubbles and in the meantime she had to walk her kids through any possible surprises.

Like sudden death for instance. Yolanda had prepared her will and she had shown her three children what the envelope it was in looks like. And that it could be found in her safe in case anything happens to her.

So now the kids know that if anything were to happen or go wrong then their mother would like for them to look after their grandmother and uncle.