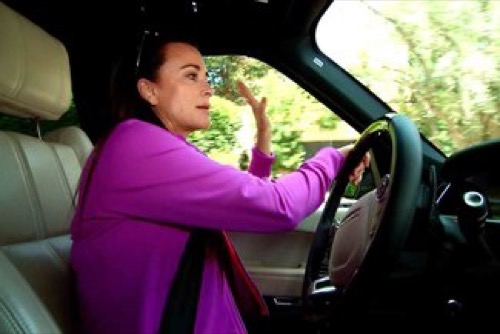 Tonight on Bravo The Real Housewives of Beverly Hills airs with an all new Tuesday, December  8, season 6 episode 2 called, “Tuscany!,” and we have your recap below. On tonight’s episode Kyle and Lisa Vanderpump are enjoying a fabulous time zooming through Italy in a Ferrari and taking in the tranquil countryside when family problems interrupt.

On the last episode, as always, fun, excitement and gossip permeated the rarified air of Beverly Hills. Lisa Vanderpump had been tapped to throw out a first pitch at Dodger Stadium, while Kyle bought $75,000 sunglasses for her store. Unfortunately, real life always had a way of rearing its ugly head.

Kyle wondered how to deal with her troubled sister Kim, currently in rehab, and Eileen suffered a loss in her family. In the midst of her Lyme disease struggle, Yolanda showed up for Lisa Rinna’s birthday dinner, but her appearance draws mixed reactions. Did you watch the last episode? If you missed it we have a full and detailed recap right here for you.

On tonight’s episode per the Bravo synopsis “Kyle and Lisa Vanderpump are enjoying a fabulous time zooming through Italy in a Ferrari and taking in the tranquil countryside when family problems interrupt. Meanwhile, back in Beverly Hills, Yolanda takes drastic measures to improve her health and Eileen and Lisa Rinna are stunned by her condition.”

Kyle Richards has always said that her family is complicated and on tonight’s episode of “The Real Housewives of Beverly Hills” we got to see just how much she was right.

Apparently Kyle was going to go first to Tuscany for her vacation with family and friends but she was going to follow that up with another short trip to London. Her niece Nicky Hilton was getting married in a fairytale inspired wedding ceremony at Kensington Palace and so as her aunt Kyle wanted to be there to support her. And support her own sister as well who was officially acting as mother of the bride.

But Kyle received a call right before her Tuscany trip. She was told that it would be for the best that she didn’t come to London. So in actuality she had been disinvited from a family wedding because of family politics.

Kyle and Nicky’s mother Kathy have had a tumultuous relationship in the past and since things with other sister Kim have gone downhill – the family has unfortunately been left divided. And it has been a bit of a sore spot for Kyle. She had initially thought her relationship with her many nieces and nephews had been a great one yet what can she do? If Kathy doesn’t want her there then she can’t talk Nicky into ignoring her own mother’s personal feelings on the matter.

So Kyle decided to just let things go. She wasn’t going to wedding and therefore she didn’t need to borrow a dress from Lisa Vanderpump. Lisa had been offering her a Badgley Mischka dress but once she found out the wedding was going to go without auntie Kyle – she suddenly wanted to know everything. And it was awkward when Lisa refused to let sleeping dogs lie.

Just earlier she had been laughing with her husband about whether or not Kylie only wore mumus but the second she found out about the wedding then naturally she felt offended that someone else had taken to shunning Kyle. If you recall the past seasons then you would know that was usually Lisa’s job. Though the ladies have since become friends again and had even planned a vacation together.

And while they were in Tuscany, Yolanda was in the states trying to find a treatment that worked. Yolanda it seems had befriended a woman that had cured her own Lyme disease so leaning on her new friend for support – Yolanda first had all the mercury filling in her mouth removed. Apparently having so many heavy metals in her mouth hadn’t been good for her so she had them replaced with white gold.

So that should have been it for Yolanda yet later testing ended up showing a still high heavy metal count. Therefore Yolanda went back to the dentist in order to get the white gold crowns removed and have them tested for any presence of mercury. And it’s safe to say the procedure was unpleasant.

Yolanda at one point could not breathe and although it could have been anxiety attack because of her situation – it was looking like it had taken toll on her husband. David has been dealing with a lot as well and watching Yolanda go through so many treatments was finally catching up with him. Because, truly, work can only be used as an excuse for so long.

And it was Yolanda’s friends that there more often than her husband. Lisa Rinna and Eileen Davidson had stopped by the apartment and they talk Yolanda into making her colonics into a fun ladies’ thing they could all do together. So for a short time they managed to lift her spirits.

However, over in Tuscany, when it was Lisa Vanderpump and Kyle’s turn to talk about Yolanda – they jumped from whether or not she was taking too much treatments to what if depression is manifesting into physical symptoms. So it almost felt like they were looking for problems with Yolanda rather than just saying the Lyme disease had been taking its tool. And then when they did begin to speak about themselves – the got into an argument.

Kyle had possibly made amends and so now she’s going to wedding. But Lisa hadn’t brought the dress with her because the last she checked Kyle had still been disinvited. So Kyle and Lisa got in a small argument about the rollercoaster relationship that Kyle has with her sisters and the actually confrontation began when Kyle asked to bench the conversation while they were in front of their kids. And Lisa simply escalated things from there.