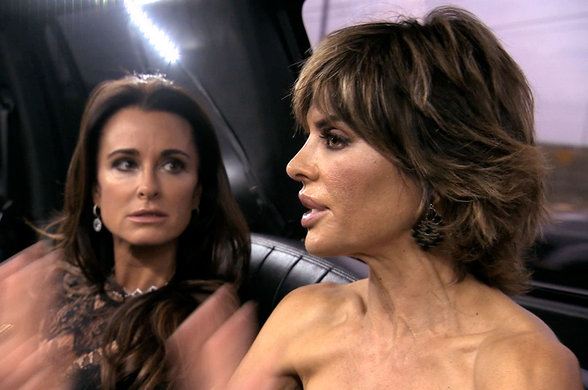 The Real Housewives of Beverly Hills returns to Bravo tonight with all new Tuesday February 24, season 5 episode 15 called, “Welcome to Amsterdam?,” and we have your weekly recap below. On tonight’s episode, The ladies come together for Yolanda H. Foster’s scavenger hunt around Beverly Hills and are forced to put aside their differences and work together as teams.

On the last episode, Eileen organized a table read for her husband’s latest Hollywood script, inviting the actresses: Kim, Kyle, and the two Lisas. Kim and Kyle acted like everything was okay between them, but after the read, emotions run high, leaving everyone wondering what lies ahead for Kim. Brandi agreed to a 21 day cleanse of no alcohol, but attending Lisa Vanderpump’s surprise birthday party may have her second guessing her decision to stay sober. Did you watch the last episode? If you missed it, we have a full and detailed recap right here for you.

On tonight’s episode as per the Bravo synopsis, “The ladies come together for Yolanda’s scavenger hunt around Beverly Hills and are forced to put aside their differences and work together as teams. Embarking on a group trip to Amsterdam, several of the ladies attend David Foster’s annual charity gala in Canada where Kim confronts Lisa Rinna over talking behind her back. When the women arrive in Amsterdam, more anger flares between the Richards sisters.”

Yolanda’s hosting a scavenger hunt around Beverly Hills. Brandi is randomly assigned to the same team as Kyle. She says in confessional that she has no problem putting their issues aside for the race.
The Lisas and Yolanda are on one team, Kyle, Brandi and Camille on another, and Kim, Eileen and Lynn, Eileen’s friend, in another. Kim, Eileen and Lynn win.

Yolanda invites the others on a trip to Amsterdam. The women will also go to Calgary, where Yolanda will take them to a charity event.

Brandi’s main concern for Kim is that she will be surrounded by people doing things she shouldn’t be doing given her addiction. She says she doesn’t know if Kim is strong enough.

Prior to everyone leaving for the trip, Brandi tells Kim about the fact that Lisa is going around talking about her addiction, asking how she is doing and if she has a sponsor. Kim thinks that if Lisa really had a concern she would speak to her directly.

Lisa says in confessional that she feels scolded. She says she is coming from a good place and is not a mean person.

Eileen is not traveling with her son, whom she usually takes with her everywhere. She gives her husband a list of duties, which is perhaps too detailed.

In the limo with Lisa and Kyle, Yolanda says she hopes the conversation in the plane doesn’t set the tone for the rest of the trip. Lisa says she’s letting it go, and she heard the message loud and clear. She says she knows about addiction because of seeing what her husband went through, quitting drinking after having to identify his brother’s body.

Kyle says in confessional that she doesn’t like being put in these situations due to Kim starting a scene in front of the group, and that if she felt that way, she should have taken Lisa aside to talk about it.

Kim says in confessional that she doesn’t harbor resentment, which is why she flipped out on the plane. However, she is here for the charity.

Steven Tyler performs at the event, and Kyle jumps up on the stage, receiving a kiss from him.

The group arrives in Holland. In the airport, Kyle can’t find her bag of jewelry. She holds up the group to find it.

As they pack their stuff into the car, Kim flips out, telling Kyle that whenever she does anything it’s held against her.