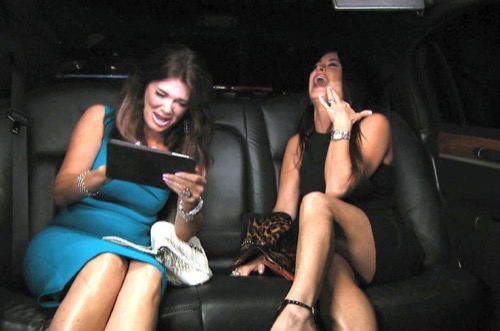 The Real Housewives of Beverly Hills returns to Bravo tonight with all new Tuesday April 21, season 5 episode 23 called, “Secrets Revealed,” and we have your weekly recap below. On tonight’s episode, never-before-seen stories are told as the Beverly Hills vault is opened. Getting primped in her hotel room, Eileen Davidson wonders if she really wants to win an Emmy. Kyle Richards’ daughter Portia decides to pursue her own acting career, while Lisa Rinna’s daughter Delilah helps her mom prepare for an upcoming movie.

On the last episode, the reunion concluded with plenty more drama and a little bit of humor. While the women can laugh about who had the dirtiest mouth, things turn sour when Kim revealed threatening texted Lisa Rinna sent her after Adrienne’s party. Kyle and Brandi argue about the “space-cakes” in Amsterdam and Kyle’s relationship with Kim unraveled further as they bring deep seeded issued to the surface. Did you watch the last episode? If you missed it, we have a full and detailed recap right here for you.

On tonight’s episode as per the Bravo synopsis, “never-before-seen stories are told as the Beverly Hills vault is opened. Getting primped in her hotel room, Eileen wonders if she really wants to win an Emmy. Kyle’s daughter Portia decides to pursue her own acting career, while Lisa Rinna’s daughter Delilah helps her mom prepare for an upcoming movie. Outside Amsterdam, the women probe into Yolanda’s past, and back in Beverly Hills, Kim confronts Lisa Rinna about threatening texts she sent.”

Previously unseen clips of the Real Housewives are shown. Andy Cohen is the host.

Yolanda confirms that she’s selling the house. She says she is downsizing because her kids are out of the house and she and her husband can’t handle all the space. In the clips, Yolanda goes house hunting for the first time in years. The homes are ranged from $12 million to $15 million.

Lisa Vanderpump laments to her housekeeper that she has to bribe her children to see her now. When Pandora and her husband Jason come home to visit, she tells them that everything they’re doing is great and she supports it but they’re not here. She tells them she would be happy if they had a kid.

At the reunion, Kim revealed that Lisa Rinna had sent her wild text messages. Shown is the confrontation viewers didn’t see:

The two ladies talk outside on a bench. Kim tells Lisa she’s here only to discuss the texts, which “completely concern” her, particularly one saying “I will f*ck you up.” She says what frightens her is that it didn’t come in a heated moment, and she received another text at 3 a.m.

Rinna says she was “pissed off” about the remarks Kim made about her husband. She says that anyone would have jumped across the table had she said something about one of their husbands. Kim says this isn’t about that, but rather about the threats. Rinna says she’s owned up to that and it’s done.

Kim says it’s not over and she shouldn’t send anyone threats. Lisa responds that she shouldn’t have said horrible things about her husband. Kim gets up, asking Lisa if she is safe in a room with her and if Lisa will keep her hands to herself. Lisa says yes and tries to continue talking about the remarks Kim made about her husband, but Kim storms off.

As Kim jumps over a concrete barrier to leave, Lisa shouts that someone has to hold her accountable for her actions and that she feels sorry for her.

Cohen asks Eileen how her soap fans have reacted to her on reality television. She says she has only seen positive reactions, and that her fans like to see how she is in real life.

Eileen has been nominated for her second Emmy, and she goes to the show in a Marilyn Monroe inspired look. She wins the award.

Clips of Kim and Brandi’s friendship are shown, including when the two go to Kim’s pilates class, which Brandi fails miserably at.

On the Amsterdam trip, Yolanda takes everyone back to the house where she grew up, showing all of the rooms where other people now live.

Kyle takes her daughter to a professional who helps her with her pronunciation.

The ladies go to Camille’s place for a tennis party. She takes them on a tour of the property on a golf cart before they play. Vanderpump is the only one dressed appropriately.

In confessional, Lisa Rinna says it’s nice because she feels like she has a lifelong connection with the group and they can have fun.