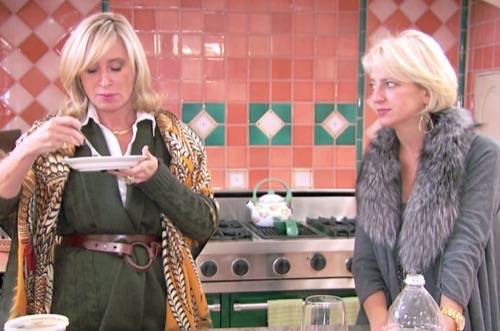 The Real Housewives of New York returns to Bravo tonight with all new Tuesday April 14, season 7 episode 2 called, “New House, Old Grudges,” and we have your weekly recap below. On tonight’s episode, the ladies hit the Hamptons for a weekend of fun and nostalgia. After selling the last pieces of her recently-sold estate, Luann de Lesseps shows off her new home to all the ladies at an informal housewarming party.

On the last episode, it was transition time for many of the women as Bethenny was still dealing with the chaos of her divorce and with no place to call home, she was trying to find where she belonged. Excited about a fresh start of her own, Luann planned a weekend at her new home in the Hamptons and invited all of the ladies to join. Ramona was coping with her separation from Mario and attempting to move on with her new life as a single lady. Meanwhile, Carole felt the pressure from her book publisher to make a deadline and new housewife Dorinda was living two separate lives – one included her boyfriend John and the other includes her 21-year-old daughter Hannah. Did you watch the last episode? If you missed it, we have a full and detailed recap right here for you.

On tonight’s episode as per the Bravo synopsis, “the ladies hit the Hamptons for a weekend of fun and nostalgia. After selling the last pieces of her recently-sold estate, Luann shows off her new home to all the ladies at an informal housewarming party. Dorinda and Sonja finally meet each other at Ramona’s house where she’s hosting the two for the weekend. Everyone agrees that the situation with Mario has brought out a softer side of Ramona, which is evident when she pulls Luann aside to talk about the past. Things get cooking when Carole flirts with Luann’s much younger personal chef. The ladies haven’t seen Bethenny in a long time and when tensions surface with Ramona at Luann’s party, lines are drawn.”

Tonight’s episode is going to be filled with the usual Housewife drama and you won’t want to miss it, so be sure to tune in for our coverage of the show tonight at 9 PM EST! While you wait for our recap hit the comments and let us know how excited you are about the new season of “The Real Housewives of New York!.”

LuAnn has an estate sale at her old house.

Given that she has been going between corporate housing and hotel rooms for so long, the only consistent place in Bethenny’s life is her car, and she’s sick of it.

She is contemplating whether her office should be in or outside her home. It has always been in her home, but now she doesn’t feel comfortable doing that.

At the estate sale, Ramona apologizes to LuAnn, saying she never should have said what she did about her own marriage now that she knows what she is going through. She calls her own words callous and unfeeling, saying she hopes the other woman will forgive her. LuAnn says she will accept her apology but they will see if she means it, as Ramona has apologized to her in the past.
In confessional, LuAnn says she thinks Ramona’s apology was “more sincere than usual,” but she will not forget the things she has done to her in the past.

LuAnn tells the others about Ramona apologizing to her. She says that for the first time she believes the apology was heartfelt. The women discuss how they think the experience was humbling for Ramona. LuAnn says she wishes her the best. Carole makes an irritating cynical remark in confessional implying she thinks basically all men cheat on their wives.

Dorinda, Ramona and Sonja go to a restaurant. When Dorinda starts to tell Sonja about her Armenian husband, Sonja compares that to Ramona being “Italian.” Ramona says she is not Italian, but Hungarian. Sonja says she knows she promised not to bring up Mario, but she was just comparing them because she as married to an Italian. Ramona tells her to say “European lifestyle.”Dorinda and Sonja irritate Ramona once again by comparing Dorinda’s husband to Mario because they are both “manly.”

LuAnn has her housewarming party. Sonja brings a beer in her purse. Bethenny arrives with no idea of how she is going to be received.  When Ramona comes in, she is ready to party.

When the conversation goes to Ramona’s relationship status, the women joke about her keeping the company of men. Bethenny says that doesn’t sound like her as it sounds promiscuous, as if she is sleeping with many men. Ramona says she doesn’t know where she is going and she is just going with the flow.

Everyone discusses the plan for the next day, and Bethenny tells Sonja she will be coming over to her house. Ramona says she isn’t going anywhere as she is her house guest. Bethenny asks her if she is seriously saying this right now, and Ramona says she should not invite someone else’s house guest to her house. Ramona goes to LuAnn and asks her opinion, which cases Bethenny to drop out of the conversation due to its ridiculousness.

She and LuAnn go outside, where Bethenny says she feels like she is in Bizarro Land. Ramona comes out, apologizing to Bethenny. Bethenny says she really doesn’t want to hang out with her, and that she’s clearly going through something. Ramona says Bethenny is the one who is acting weird.

Ramona starts telling her to calm down and take a deep breath, even though she is visibly calmer than she is. Bethenny starts walking away while Ramona is still saying she doesn’t know why Bethenny was offended.

Bethenny and Isaac Mizrahi are the guests.

Cohen asks for Bethenny’s opinion on the issues between the Richards sisters (Real Housewives of Beverly Hills). She says: She has known them about 25 years and cannot imagine bringing a sister into the show. There are deep-seated things there that have been going on for years. She says there have always been some nuances with the three sisters.

She thinks they are in a town where money, attention and fame are really prevalent and it’s an alternative universe. She doesn’t know how they’re going to get out of it, and she doesn’t think them being on the show together is leading things in a good direction. Kim can be a bit of a victim and dramatic.

A viewer asks Bethenny she was disappointed that she has called herself “homeless” as a multi-millionaire while others are suffering. Bethenny says she opens herself up to scrutiny being famous. She says doesn’t actually think she’s homeless, and she helps a lot of women who are or would be homeless with the money from her company. She says that she hasn’t been able to get a new place for reasons she cannot detail, but her pain is just as real as theirs.

A caller asks Mizrahi which of the housewives earns his all star prize for fashion. He says that, other than Bethenny, his choice is Shannon, whose simple and classy style he likes.

Another caller asks Bethenny if she thought Ramona’s apology to LuAnn was sincere. She says yes, and that Ramona is going through something very difficult and realized something in that moment.

The poll of the day is “Is it rude to invite someone’s houseguest to your brunch?”