The Real Housewives of New York Recap 4/21/15: Season 7 Episode 3 “Battle of the Brunches” 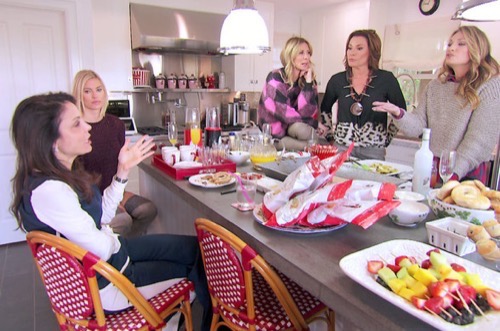 The Real Housewives of New York returns to Bravo tonight with all new Tuesday April 21, season 7 episode 3 called, “Battle of the Brunches,” and we have your weekly recap below. On tonight’s episode, Luann de Lesseps, Carole Radziwill, Kristen Taekman, and Heather Thomson do not want to take sides in a possible renewal of tensions between old frenemies, so they decide to attend both Bethenny Frankel’s and Ramona Singer’s brunches. First the ladies head to Bethenny’s, where they load up on mimosas and gossip. After some fun and food, they arrive late to Ramona’s brunch to find Dorinda and Sonja grumpy and on their way out.

On the last episode, the ladies hit the Hamptons for a weekend of fun and nostalgia. After selling the last pieces of her recently-sold estate, Luann showed off her new home to all the ladies at an informal housewarming party. Dorinda and Sonja finally met each other at Ramona’s house where she was hosting the two for the weekend. Everyone agreed that the situation with Mario has brought out a softer side of Ramona, which is evident when she pulled Luann aside to talk about the past. Things got cooking when Carole flirted with Luann’s much younger personal chef. The ladies hadn’t seen Bethenny in a long time and when tensions surfaced with Ramona at Luann’s party, lines were drawn. Did you watch the last episode? If you missed it, we have a full and detailed recap right here for you.

On tonight’s episode as per the Bravo synopsis, “Luann, Carole, Kristen, and Heather do not want to take sides in a possible renewal of tensions between old frenemies, so they decide to attend both Bethenny’s and Ramona’s brunches. First the ladies head to Bethenny’s, where they load up on mimosas and gossip. After some fun and food, they arrive late to Ramona’s brunch to find Dorinda and Sonja grumpy and on their way out. Back in the city, Dorinda re-connects with her boyfriend, John, and Bethenny checks in on the renovation of her new apartment. Meanwhile, Ramona and Luann nurture their renewed friendship with a heart-to-heart about Mario. When Luann meets Bethenny and Heather for lunch the next day, it becomes apparent that there may not be room in this group for two hyper-opinionated women.”

Tonight’s episode is going to be filled with the usual Housewife drama and you won’t want to miss it, so be sure to tune in for our coverage of the show tonight at 9 PM EST! While you wait for our recap hit the comments and let us know how excited you are about the new season of “The Real Housewives of New York!.”

Only in New York could there be a Battle of the Brunches. However, on tonight’s episode of “The Real Housewives of New York”, Bethenny doesn’t want the fact Ramona planned another brunch at the last minute just to spite her – actually get in the way of her having a good time. So she told everyone that showed up at her brunch, before they went to Ramona’s that is, that she wasn’t the one that had the problem. According to her, it was Ramona that initially began their “feud” and it was Ramona that was continuing.

See, everyone thought the ladies were arguing about a dress. But not just any dress. It was a couture dress.

Bethenny had loaned Ramona a very expensive dress from her now defunct TV show and for some reason Ramona stole it. Kind of weird but the story does get weirder! First she tried to lie and say she lost the dress. Only for her to be seen wearing the same dress a couple of months later. So, she stole the dress.

Then, when these two ladies saw each other after months of estrangement, Ramona apologized. And even Bethenny said the dress stopped being an issue. Though what did lead them to where things currently stand is Sonja.

This new fight they’re having is because of Sonja and Sonja doesn’t even know. But she’s Ramona’s best friend and Ramona cane be a tad territorial about her. So Ramona ended up getting into an argument with Bethenny when Bethenny said she wanted to invite Sonja to her brunch.

At least that’s what Bethenny claims. Ramona on the other hand is still telling people that Bethenny is upset about the dress mentioned earlier. So who knows with these two? Maybe one of them was in one conversation and the other was buzzed!

Whatever the case, once Sonja was brought into the conversation – Luann and the rest of the girls suddenly had a lot to fill Bethenny on. And they told her everything. They mentioned Sonja’s drinking and her elaborate stories about her business venture. And then mentioned that even Ramona is getting embarrassed by the other woman.

So, all in all, Bethenny had a pretty good brunch. Though their long chats later made the rest of the girls late for Ramona’s brunch. Or, in other words, brunch was nearly over by time Luann, Heather, Carole, and Kristen finally deign to show up.
Also, Ramona’s brunch was in honor of Dorinda and Dorinda got to see the whole gang for about a minute before she had to leave in order to make her next meeting at lunch.

Ramona, though, didn’t go off on them. Earlier she had she gotten into an argument with Sonja but for the most part Ramona seems likes she mellowed out this season. And Luann got that impression as well.

The brunch was fine and afterwards, in what she hasn’t done in years, Luann went over to Ramona’s to have a heart to heart. Ramona still had some things to get off her chest and strangely Luann was the perfect person for her to talk to. Especially about marriage ending.

Now Ramona was married for a long time however since she’s gotten over that heartbreak she’s actually been a lot calmer. And that’s because she’s put the way her marriage ended behind her and it’s the fact that it ended at all is what sometimes gets to her. Yet, despite that, when she heard that her husband was using a matchmaking site to find someone – she didn’t lose her infamous temper. Instead she was able to see the humor in it and sort of wished him well.

So with both Ramona and Bethenny in a better place, the other ladies wanted to see if they could mend things. And Betheny, well, she put up some resistance.

Bethenny essentially didn’t want anything to do with Ramona and she was actually prepared to bite off the heads of the messengers when they brought up a possibly reconciliation. So when Luann went on to invite her to a Girls’ Night Out, Bethenny didn’t think it was going to be that big of a deal. Nor did she suspect Luann had something up her sleeve.

By then she had made her feelings about Ramona pretty darn clear.

But Luann, choosing to be optimistic, tricked her. And so Bethenny was upset to see Ramona was also at this Girls’ Night. Hence, Bethenny then tried to ignore everyone and simply flirt at the bar rather than join her friends.

Luann did eventually get her to join the others and, you what, Ramona and Bethenny barely spoke. And when they did exchange a few words it was about the guys Ramona was flirting with at the club. So, to be fair, Bethenny made a big deal out seeing the other person for no reason.

Both ladies had a good time and personally I’m not sure there’s even still a feud at this point!