The Real Housewives of New York Recap – The Art of Being a Cougar: Season 7 Episode 4 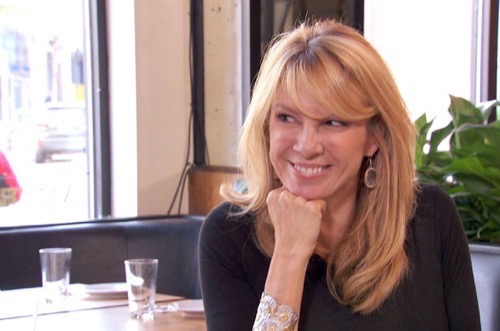 The Real Housewives of New York returns to Bravo tonight with all new Tuesday April 28, season 7 episode 4 called, “The Art of Being a Cougar,” and we have your weekly recap below. On tonight’s episode, after a wild single ladies night, Carole Radziwill catches up with Heather Thomson at the Highline to discuss her dating life. Later, Carole gets her game on with Luann de Lesseps’s hot, younger chef, Adam. Bethenny Frankel decides to throw herself a last minute birthday dinner, where Sonja Morgan and Luann bring some much younger men as their dates.

On the last episode, Luann, Carole, Kristen, and Heather did not want to take sides in a possible renewal of tensions between old frenemies, so they decided to attend both Bethenny’s and Ramona’s brunches. First the ladies headed to Bethenny’s, where they loaded up on mimosas and gossip. After some fun and food, they arrived late to Ramona’s brunch to find Dorinda and Sonja grumpy and on their way out. Back in the city, Dorinda re-connected with her boyfriend, John, and Bethenny checked in on the renovation of her new apartment. Meanwhile, Ramona and Luann nurtured their renewed friendship with a heart-to-heart about Mario. When Luann met Bethenny and Heather for lunch the next day, it became apparent that there may not be room in this group for two hyper-opinionated women. Did you watch the last episode? If you missed it, we have a full and detailed recap right here for you.

On tonight’s episode as per the Bravo synopsis, “after a wild single ladies night, Carole catches up with Heather at the Highline to discuss her dating life. Later, Carole gets her game on with Luann’s hot, younger chef, Adam. Bethenny decides to throw herself a last minute birthday dinner, where Sonja and Luann bring some much younger men as their dates. Meanwhile, Kristen is upset she didn’t get an invite to the party. Ramona meets up with her restaurant partner Peter to discuss business, with a side of flirting. The night ends with a war of words between Bethenny and Heather at dinner, while Carole and Dorinda watch on as the two alpha divas go head to head.”

Carole and Heather go on a walk. Carole talks about going on a date with Adam, LuAnn’s 29-year-old private chef, on which she took drugs at a party and threw up everywhere. She says in confessional her opinion on things like puking around men: she says men don’t get grossed out by things like that and that it makes you look vulnerable, which men like (gag). She says it must have worked as he stayed that night and didn’t even leave the next day. Heather asks Carole if she’s told LuAnn about this, and she says no.

Bethenny’s birthday is tomorrow. She says in confessional that she isn’t putting much pressure or planning into this birthday, so she is just going to celebrate at a restaurant. She says gatherings like these help her with the issues she’s going through.

Sonja comes to the celebration with her beau Dominik, who is hot as hell. Dominik’s hot roommate is also at the dinner, the plus one of a plus one. Carole tries to tell them about her modeling past, bringing up both Jordache Jeans and Guess, and neither of them recognizes it. One of them tries to say he thinks she was pronouncing it wrong.

Bethenny has invited Ramona because she enjoys her company.

Kristen’s daughter calls her, and Kristen asks her what she did the night before. She tells Kristen about Bethenny’s birthday party, listing all of the people in the group who were there. She asks what Bethenny’s beef with her that she wasn’t invited and her daughter says that Dorinda also wasn’t invited.

Dorinda’s daughter Hannah calls her a chubby chaser, saying she has no interest in fit young guys. She says Dorinda had an opportunity to get a young guy after her husband passed away, but she went for John instead.

Ramona says in confessional that she didn’t realize how much energy Mario was taking up and now that they’re done, she can do things she wants to do. Now, she’s getting involved in the restaurant industry. She now has an experienced partner named Peter. The two of them meet up, flirting during their meeting. She describes Peter as cute and a flirt in confessional, remarking that she is single now.

Carole hangs out with Adam. They go to an arcade that looks like an art gallery and play ping pong. She tells him that she saw LuAnn the other night, who told her she didn’t know she was saying a younger man. Carole says LuAnn doesn’t know who the guy is.

Dorinda goes to dinner with John, and invites him to stay over. She gets annoyed when he tries to order her meal for her, something he always does. Then, they fight when he starts talking about her daughter, Heather.

Dorinda and Bethenny arrive first to a group dinner. Dorinda tells her about a sample sale and she freaks out. Then Carole and Heather arrive.

Bethenny brings up Dorinda’s boyfriend being at Boutique, which Dorinda says she isn’t happy about. She says she wasn’t thrilled that he went through the kitchen to get to the back area. She says in confessional that she wishes John would understand that his actions reflect back on her.

When Dorinda mentions her “late husband,” Bethenny says she sounds old saying that and that they need to rebrand her, asking Carole for help because she is a writer and suggesting “dead husband” before asking if that was too harsh. In confessional, Carole says that it was interesting that Bethenny suggested rebranding death.

Dorinda complains to Heather about her daughter’s negative comments about John, saying that she needs to accept whatever she does. She hasn’t brought John around her daughter, which the other women don’t think is good. Bethenny tells her to be frank and tell her exactly what she is doing. Dorinda says that Hannah just says that she’s her daughter and is going to get rid of him.

Heather tells Bethenny that she spoke to Kristen and her feelings were hurt about not being invited to Bethenny’s party. Bethenny immediately gets annoyed, pretending to go to sleep and saying it’s ridiculous.

Heather tells Bethenny that she told Kristen she was invited the last minute. Bethenny says she invited her because Carole was coming. She asks if she was Carole’s plus one, and Bethenny says yes.  “I don’t see anything wrong with any of this,” Bethenny says.

Bethenny says she was Carole’s plus one and she wasn’t going to lie about that, and that Heather brought it up which is the only reason she said so.

The guests are Sonja Morgan and Real Housewife of Miami Lea Black.

He asks if the two of them know each other and they say yes, they met each other in LA before Real Housewives.

The discussion goes to the boy toys of the cast, showing Carole, LuAnn and Sonja with their young boyfriends. Cohen says that LuAnn was on fire tonight on Twitter shading Carole for puking in a penny cab and scrounging for dates in her kitchen.

The poll of the day is: “Whose relationship do you think will last the longest?” Carole, LuAnn or Sonja

Sneak peak of the next episode:

Bethenny accompanies Sonja at a meeting for her fashion line, criticizing them for saying the line will come out in 2015 when they haven’t made any orders. One of the people tells her that they have connections and it seems crazy, but this is something they do.

A caller asks how Sonja feels about the new Bethenny showing her claws. Cohen adds the question of whether Bethenny has gotten meaner. Sonja says she doesn’t feel that way, saying Bethenny brings a lot to the show. She says they needed the sizzle for the show, and Bethenny is great to watch. She says Bethenny is tough on everyone including herself, comparing her to Aviva.

Sonja is asked why she looks so good. Sonja says she has gained weight, some of which went to her face. She also says she gets Botox in the forehead and neck area, and that she has gone to see someone about fillers but didn’t do it. She says when she was 20, she got fillers in her face.

Sonja is asked how she felt about Kristen being hurt that she wasn’t invited to Bethenny’s party and Bethenny’s reaction to that. Sonja says Bethenny said she didn’t know Kristen, and that on your birthday you can invite whoever you want.

A viewer asks Sonja if there is something he can put on his intern application to be chosen over other applicants. She says activism work, camp counseling or working with children, which show you can keep a schedule and work as part of a team.

A caller asks Sonja who is the youngest and oldest men she has ever dated. She says in the last ten years, the youngest was 23 and the oldest was her husband, who is 75 or 76.

Another caller asks her why she felt the need to smuggle in a beer to LuAnn’s housewarming party. She says when she feels like she’s gaining weight she drinks beer because it is filling, and a Russian friend told her beer would keep her face full. She says at the party she discovered that LuAnn already had beer.

The results of the poll question: