The Real Housewives of New York Recap “Double Down on Delusion”: Season 7 Episode 6 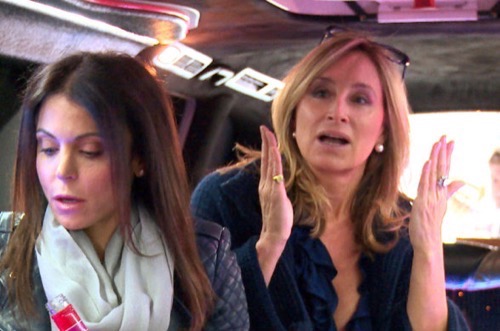 The Real Housewives of New York returns to Bravo tonight with all new Tuesday May 12, season 7 episode 6 called, “Double Down on Delusion,” and we have your weekly recap below. On tonight’s episode, the women all head off together to Atlantic City for Ramona Singer’s first birthday without Mario. Things get off to a rough start when Sonja Morgan won’t let the ladies into her townhouse, and they have to wait outside in the pouring rain. After a memorable limo ride to Atlantic City, the ladies try to change their luck and sit down for a lavish dinner.

On the last episode, having been warned about Sonja’s questionable business aspirations, Bethenny had lunch with her to see firsthand if the other women have a point. Meanwhile, Luann and Dorinda met for pedicures to discuss Dorinda’s impressions of the ladies and her relationship with John. Kristen had a photo shoot guerilla-style on the streets of New York for her new fashion blog. Later, Dorinda hosted a cocktail party for all of the ladies and their men, where Carole made a confession to Luann, Sonja felt attacked from all sides, and Dorinda’s boyfriend got flirty with some of the guests. Did you watch the last episode? If you missed it, we have a full and detailed recap right here for you.

On tonight’s episode as per the Bravo synopsis, “the women all head off together to Atlantic City for Ramona’s first birthday without Mario. Things get off to a rough start when Sonja won’t let the ladies into her townhouse, and they have to wait outside in the pouring rain. After a memorable limo ride to Atlantic City, the ladies try to change their luck and sit down for a lavish dinner. Things turn sour when Bethenny calls Sonja out for not listening to her, leaving Sonja in tears. Ramona changes the mood with some raucous gambling and dirty dancing. Still frustrated with Sonja’s outrageous, alcohol-fueled behavior, Bethenny tries to have a serious talk with her, leading to a no-holds-barred exchange.”

Dorinda, Kristen, Heather and Ramona arrive at Sonja’s place for the trip she has set up. Her housekeeper tells them they have to wait outside in the rain because she’s getting ready. The arranged limo comes and they all get inside. Bethenny then shows up, 30 minutes late.

Sonja finally comes out and gets in the limo. Sonja yells across the limo to Heather, saying they need to get along for the trip to make Ramona comfortable. Heather complains that they were forced to wait in Sonja’s freezing cold foyer, and Sonja says ‘wait at Starbucks then.’

Sonja says she doesn’t understand why everyone is mad because one person was going to be late, and Heather says again that she was mad because they were forced to stand in her foyer for an hour. Heather reassures Sonja that she will not be going to her home again.

They continue to fight, and Ramona starts screaming, saying she has had enough stress in her life, but they keep going. Heather says that she would never leave people outside to wait for her, and that she doesn’t consider someone who does that a friend.

Bethenny makes Sonja give an apology.

During the limo ride, Bethenny gives Sonja some advice. She tells her to stop name dropping because it will sound as if she is all talk and pretentious.

In Atlantic City, Heather tells Carole and LuAnn about the devastating incident that happened earlier at Sonja’s place.

The women all get ready for a night on the town, and when Heather is the last to arrive, Bethenny brings up her being late and Heather gets defensive. At dinner, Bethenny says she doesn’t care if Heather was late, but they both have been late, and she tells Heather to get the chopstick out of her ass.

Bethenny says she doesn’t like when people make digs at other people and would rather that everyone just be straightforward with one another. Sonja starts talking to her and says she has been in PR her whole life. Bethenny tells Sonja that she can’t say things like ‘I’ve been in PR my whole life’ because it is pretentious, which Sonja perceives as an “attack” and gets mad at her.

Bethenny tells her she needs to take “a break or a Xanax or something.” She lists Sonja’s positive attributes, and Sonja asks if Bethenny is saying she doesn’t have a legitimate business. Sonja breaks out into tears. “Sonja, you’re gonna alienate the one person who’s been nice to you,” Bethenny says. Sonja tells Bethenny she’s going to alienate the one person who has been a pillar to her.

LuAnn then flat-out Sonja to stop crying because it’s Sonja’s birthday, and she finally calms down.

Ramona starts lamenting about her separation from Mario.

LuAnn tells Ramona she thinks she is so much better off without Mario, and that she has found her a more interesting person since the divorce. Ramona says she has no idea what is going on with her, where she’s going or what she’s doing and she doesn’t care. The women go gambling and clubbing.

Dorinda is taking care of a drunk Sonja, who has been abandoned by everyone else. Sonja brags about her various past exploits, including being a model, as she stumbles down the hallway.

Dorinda gets Sonja into the room, and Sonja starts bitching about everyone being mean to her. Dorinda asks who has been mean to her. She says Carole, who is supposed to be loving because she’s an artist. She says she herself is an artist, and raises millions of dollars for “the LGBT.”  “Money speaks, wealth whispers,” Dorinda says.

Sonja continues, saying she parties with John F. Kennedy Jr. and Madonna all the time, and Dorinda remarks on the fact that the former is dead before storming off and going to sleep.

The next morning, everyone is exhausted from dealing with Sonja, but Sonja is completely fine. LuAnn tells her that it’s hard to see her in the state she was in last night.

Bethenny arrives, and Sonja pulls her aside to talk to her. Bethenny says she knows Sonja is going through a hard time, but Sonja interrupts her again to repeat the same thing she was saying the night before. Bethenny ignores that and tells Sonja that it is not good for her to mix medications and alcohol. Sonja says she is taking vitamins given to her by her doctor. Bethenny says she thinks Sonja is choosing to party rather than to talk to someone about her issues.

Sonja says something has been going on with her since her relationship with her husband fell apart. In confessional, Bethenny compares Sonja’s life to the movie Frozen, saying her divorce was a long time ago and she needs to let it go. She urges Sonja to move on, saying she needs to take care of herself.