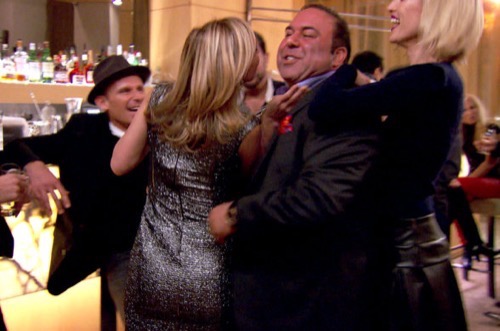 The Real Housewives of New York returns to Bravo tonight with all new Tuesday May 5, season 7 episode 5 called, “Mind Your Own Business,” and we have your weekly recap below. On tonight’s episode, having been warned about Sonja’s questionable business aspirations, Bethenny Frankel has lunch with her to see firsthand if the other women have a point. Meanwhile, Luann de Lesseps and Dorinda Medley meet for pedicures to discuss Dorinda’s impressions of the ladies and her relationship with John.

On the last episode, after a wild single ladies night, Carole catched up with Heather at the Highline to discuss her dating life. Later, Carole got her game on with Luann’s hot, younger chef, Adam. Bethenny decided to throw herself a last minute birthday dinner, where Sonja and Luann brought some much younger men as their dates. Meanwhile, Kristen was upset she didn’t get an invite to the party. Ramona met up with her restaurant partner Peter to discuss business, with a side of flirting. The night ended with a war of words between Bethenny and Heather at dinner, while Carole and Dorinda watched on as the two alpha divas went head to head. Did you watch the last episode? If you missed it, we have a full and detailed recap right here for you.

On tonight’s episode as per the Bravo synopsis, “Having been warned about Sonja’s questionable business aspirations, Bethenny has lunch with her to see firsthand if the other women have a point. Meanwhile, Luann and Dorinda meet for pedicures to discuss Dorinda’s impressions of the ladies and her relationship with John. Kristen has a photo shoot guerilla-style on the streets of New York for her new fashion blog. Later, Dorinda hosts a cocktail party for all of the ladies and their men, where Carole makes a confession to Luann, Sonja feels attacked from all sides, and Dorinda’s boyfriend gets flirty with some of the guests.”

Bethenny and Sonja meet at a restaurant.

They discuss Sonja’s lawsuit, which has resulted in her having to pay over $7 million. She has had to sell her house in France, and they want her to sell her place in New York. The two bond over their mutual quasi homelessness. They then discuss Sonja’s fashion business, and Bethenny tells her to focus on one product instead of several.

They also discuss Sonja’s divorce, and Bethenny tells her she should find someone who is sexy but she knows she won’t get attached to. Sonja says she doesn’t swallow, and that’s the truth… unless they have a Black Card. Those open up many doors and throats, she says.

At dinner, Carole tells Kristen that she and Adam are spending a bunch of time together. She reveals that she has been invited to a dinner at LuAnn’s house, but hasn’t yet told her that she’s banging her cook.

Ramona goes over to Sonja’s house. Sonja shows her her health juice, which Ramona tries reluctantly. Sonja says she invited her over because she knows she’s been going through some things and would like to invite her out to Atlantic City for her first birthday without Mario. Ramona asks if the other girls are going to be invited, and Sonja says the others attack her and she wants it to be fun. Ramona says that as long as Sonja doesn’t talk about her business, she should be fine.

Dorinda tells her daughter that she is disappointed Bethenny can’t come to her event.

She also complains that Ramona hasn’t taken to John 100%. She says John can be a bit overbearing to some people. Hannah advises her to tell him to be well-behaved and quiet, but not to control him because he is his own person and the more she tries to control him the more out of control he will be.

Kristen has started a fashion blog and gotten an intern.  She goes out into the street, changing on the corner and then taking photos of her outfit.

Sonja goes to check out the designs for her SS15 collection, inviting Bethenny as she has had an interest in her lately. Bethenny learns about the other brands Sonja is starting. Sonja shows her all of the designs lining the walls, and when Bethenny asks when it’s coming out, they don’t have a clear answer and say they are working on it. Sonja’s team tells her they can’t tell her information about where they will be selling the clothes and when they are coming out. She says if they are releasing something in the spring of 2015, they would know where it is going to be sold. When asked if she is involved in the clothing business, she says that yes, she is involved in shapewear. They tell her that it sounds off but they have connections and are doing this.

Bethenny brings up Sonja’s previous failed ventures, including a toaster Sonja invested in and filmed a commercial for that “never toasted anything,” and Sonja says the investor backed out.

Sonja arrives with her model beau, Dominik, and Ramona is pressed that she breezes past her. Sonja is surprised when LuAnn and Heather say they would have liked to go to Sonja’s showroom for her fashion company, which the two previously denied the existence of.

Carole tells LuAnn about her ongoing relationship with LuAnn’s cook, who previously dated LuAnn’s niece. LuAnn says she kind of feels bad because she invited him to the house to cook and they ended up hooking up. In confessional, Carole says she doesn’t care and she didn’t do anything wrong as the two of them are single.

Adam is going to go to Nicaragua with a group of people, including LuAnn’s niece. “We’ll figure it out,” LuAnn says.

Heather tells Kristen that she didn’t mean to start a fuss by telling Bethenny that Kristen’s feelings had been hurt when she wasn’t invited to Bethenny’s birthday party. She says that Bethenny was actually the one who overreacted.

Ramona bitches to Dorinda and LuAnn about Sonja ignoring her when she walked in. Sonja tells Dorinda that Ramona is ignoring her, so Dorinda says she will bring Ramona to her.

Sonja goes on a drunken rant about how much she was calling attention to herself at the bar, and then Ramona implores her simply to apologize for hurting her feelings by not saying hello as she walked in. They make up after Sonja tells her that the last person she is trying to hurt right now is her.

Kristen suggests to Ramona that she may take inspiration from her friends and have a fling with a hot young guy. Ramona tells her that if something were to happen to her husband, she may consider that, but she herself is better than that and doesn’t need to go have a sexual fling because she has her hand for that.

John flirts and dances with Sonja and Kristen, getting touchy-feely, which annoys Dorinda because the others are already looking for something to say about him.