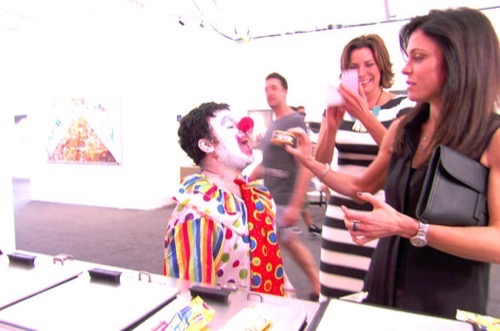 The Real Housewives of New York returns to Bravo tonight with all new Tuesday May 19, season 7 episode 7 called, “Family Matters,” and we have your weekly recap below. On tonight’s episode, Back from Atlantic City, Ramona Singer keeps her birthday festivities rolling with a party for herself and her gal pals. When some of the women attend a boxing match, Carole Radziwill and Luann de Lesseps head to their respective corners when Luann mentions Carole’s young beau, Adam.

On the last episode, the women all headed off together to Atlantic City for Ramona’s first birthday without Mario. Things got off to a rough start when Sonja wouldn’t let the ladies into her townhouse, and they had to wait outside in the pouring rain. After a memorable limo ride to Atlantic City, the ladies tried to change their luck and sit down for a lavish dinner. Things turned sour when Bethenny called Sonja out for not listening to her, leaving Sonja in tears. Ramona changed the mood with some raucous gambling and dirty dancing. Still frustrated with Sonja’s outrageous, alcohol-fueled behavior, Bethenny tried to have a serious talk with her, leading to a no-holds-barred exchange. Did you watch the last episode? If you missed it, we have a full and detailed recap right here for you.

On tonight’s episode as per the Bravo synopsis, “back from Atlantic City, Ramona keeps her birthday festivities rolling with a party for herself and her gal pals. When some of the women attend a boxing match, Carole and Luann head to their respective corners when Luann mentions Carole’s young beau, Adam. After admitting to having a hard time opening up to the ladies, Bethenny heads to Miami to connect with her closest friend and to mend fences with her estranged stepfather. Luann is also in Miami for her daughter’s appearance in the art festival, Art Basel. When Bethenny meets with her stepfather, John, for the first time in 20 years, they attempt to hash out her troubled past, and Bethenny is forced to reckon with a new revelation.”

Ramona celebrates her birthday at a luncheon with her friends. Bethenny is there, and doesn’t feel like she fits in with Ramona’s friends.

Sonja tells Bethenny that her advice has helped her, telling her that her friend, a Swami priest, told her to focus on her writing and is going to help her further.

Bethenny has no idea what she’s talking about, and tells her to focus on the things she needs to do to improve herself.

Bethenny sees her therapist. She discusses the stressful ordeal of her talk show, which failed along with her marriage. She says she’s shocked with how everything went down. She says that it’s scary to her that she can never truly know a person, so she would rather spend time with someone she used to know whom she doesn’t spend that much time with than someone new.

The therapist says she is not only having trust issues with other people, but with herself.  She says she wants to feel a connection to something in her life, telling the therapist that she is trying to reconnect with her estranged stepfather, the only person who has been a real father to her. She is going to go to Miami and meet with him.

The ladies go to a boxing match. Kristen is butthurt that Bethenny has better things to do than be there.

At dinner afterward, Carole is asked about Adam. LuAnn is asked how she feels about the whole thing, and she says it’s weird because he is her niece’s ex. Carole says they haven’t been together in a long time, which LuAnn scoffs at, saying it seems like yesterday. Carole says you can’t control these things, and LuAnn concedes that, but says ‘don’t ask me if I think it’s weird.’ LuAnn calls Adam “Sonja young,” which sets Carole off. She tells LuAnn not to compare them.

Ramona says Sonja uses her companions as toys, which Carole is not doing.  Heather says Carole seems happy and that’s all she cares about. “I’m happy if you’re happy,” LuAnn says. Carole accidentally says she wishes Adam were 20 years younger, rather than older, which cracks everyone up.

Bethenny is in Miami for a reunion with her high school friends and to meet with her stepfather. LuAnn is also coming down (her daughter is showing something at Art Basel).

She has lunch with one of her old friends, Teri. She confesses that her stepfather attacked her at 19 when she was dropped off by her mother and her new husband to pick up things from her house. That was the last time they spoke. She also shares tales of seeing him beat her mother with a phone, claiming that she was having extramarital affairs with people she met at Studio 54.

Ramona and Dorinda go to the gym. Ramona tells Dorinda that she has been dating.  Ramona says in confessional that she doesn’t know if John cares about Dorinda as much as she thinks he does, suggesting he is with her to benefit from her money.

LuAnn, her daughter Victoria and Bethenny go to Art Basel to see Victoria’s work. The work is a nude painting of herself. Her body, painted yellow, is set against a purple background. One of the art dealers at the show says the work challenges the view of femininity in the art world.
LuAnn and Bethenny walk off. Bethenny says she knows she has not been very involved with the other women in the group. LuAnn says the girls do not feel Bethenny is putting in an effort in the friend group, citing her absence at the boxing match. Bethenny says she had something to do with her daughter, but agrees to put in effort in the future to show up to things.

Carole is hard at work on her book, which is over 6 months past the due date the publisher gave her.

Bethenny meets with her stepfather, with whom she hasn’t spent quality time in over 25 years. John is a horse trainer like Bethenny’s real father. The two were friends. Bethenny brings up the crazy things that her mother has done. She says it’s hard to accept advice that she shouldn’t try to reconnect with her mother. She says that having a child changed her life, and that even leaving her daughter alone for an hour she feels like the worst mother ever.

John tells her that she has to understand her mother never wanted a child. He apologizes for the crazy things that happened during Bethenny’s childhood. However, he says she has to let go of the past to an extent because it’s not good for her. Bethenny says it is still affecting her life. She says that it is hard for her to have sex with a man because of the traumatic events that occurred during her childhood. John says that other people have had horrible things happen to them as well. Bethenny responds that this is her life. Bethenny says she isn’t mad. John says he was mad not hearing from her for 20 years.

She says that she reached out to him and he didn’t reach out to her. He says that the way he sees it, she got so successful she didn’t have time for him. She responds that she wasn’t successful until six years ago, and that she tried to contact him during the success.

Bethenny says that she feels he did the best he could do as a parent, and so did her mother. She says it has been hard to hear some of these things, but it is what it is. John says he has always had love for her in his heart, and she says she knows that. They go together to get a drink.

Dorinda says Bethenny’s reunion with her stepfather was “heartbreaking.”

The question of the day: “Which New York Housewife should be the next Bachelorette?”

Dorinda says she thinks Sonja would be the best Bachelorette.

Cohen asks if people are being fair about John. Dorinda says she doesn’t think people know John at all, and that he is a nice person who loves both men and women.

A caller asks Dorinda what the best and worst parts of being on the show are. She says the best part is being there with all your friends every day and having fun, and that the worst part is that you have to self-examine a little more than you expected. She says you see yourself on television and think maybe you’re not so perfect and could improve.

Another call her ask whose side she is on, LuAnn’s or Carole’s (regarding Carole’s young beau, Adam, who is LuAnn’s cook and LuAnn’s niece’s ex). Dorinda says she gets where both are coming from, but she thinks they should squash it and move on.

Bethenny wins the question of the day poll with 25%.