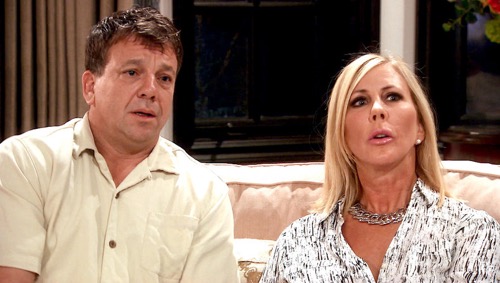 The Real Housewives of Orange County returns to Bravo tonight with an all new Monday July 27 season 10 episode 8 called, “Judgy Eyes & Tahitian Skies,” We’ve got your recap down below! On tonight’s episode, when Meghan King Edmonds hosts a couple’s game night, her husbands’ absence becomes fair game for gossip with the other ladies. Meanwhile, Shannon Beador and David meet with their therapist.

On the last episode Vicki enlisted the powers of a medium to try and communicate with her mother. Shannon discovered that to lose physical weight, she had to do more than just exercise, she had to deal with the weight of her emotions too. Meghan tried to teach her step daughter responsibility but learned a lesson about parenting instead.  While Tamra and Eddie struggled to work together at the gym, Heather was eager to start a new project with Terry. All the ladies came together for a fun night of bowling and a surprise announcement. Did you watch last week’s episode? We did and we recapped it right here for you.

On tonight’s episode per the Bravo synopsis “when Meghan hosts a couple’s game night, her husbands’ absence becomes fair game for gossip with the other ladies. Meanwhile, Shannon and David meet with their therapist. Later, the women head off for a tropical get away to French Polynesia, but the road to paradise gets bumpy when Meghan and Vicki don’t see eye to eye.”

Meghan tries to set up a new system of responsibility to get her stepdaughter Hayley in line after she fails to do her homework. She reads off a list of rules that she needs to follow.

She tells Hayley that when she moves out and has her own house with her own rules she can do whatever she wants.
Hayley says they should wait until dad comes back, and Meghan agrees, saying they are a team.

Terry and Heather go on a date. They go shopping at clothing stores, which is refreshing to Heather since she’s been looking at parts for the home instead of fun things.

At a store, Terry raises his eyebrow when Heather picks up a shirt that is $200. “How much do my clothes cost?” he asks.

Meghan calls her and tells her that she and Hayley have set up for game night with a Candy Land theme. Heather asks if she will be her date since Terry can’t come, and Meghan says yes as she won’t be seeing Jimmy until after she comes back from Tahiti.

In confessional, Shannon sarcastically talks about how happy she is that she got invited to Meghan’s party this time, rolling her eyes.

At the party, Lizzie and Shannon notice that Jimmy isn’t there and discuss the fact that he hasn’t been around for weeks. The two women say that they wouldn’t throw a game nght if their own husbands weren’t home.

Vicki leaves the party after the group plays one game, and Heather and Meghan whisper to eachother about how rude she’s being.

Meghan tries to attention seek by pointing out the “wrinkles” on her forehead, saying she gets Botox. When the women are shocked, Meghan asks them if they haven’t done it before. Shannon says she’s has Botox done a couple of times before. Meghan tells Shannon that she has “judgy eyes.”

Shannon says she didn’t do anything until she was 47, but she wasn’t judging. She says she’s sorry if she sounded judgy. She then gets up, saying David has to work in the morning. She and her husband storm out.
Everyone else then leaves, with Heather the only guest left.

Shannon and her husband go to therapy. Shannon says when things come up that spark memories about the affair, she feels it escalates things between them. The therapist says the two of them should not be discussing these issues on their own. Shannon says there isn’t a day that goes by that she doesn’t think about the affair 50 times, and that everything triggers it. The therapist says her feelings are not safe to discuss with David at this point.

David says when they talk about it, it just feels like having an argument.

Shannon says she just wants the hurt to stop, and that she doesn’t want to think about the affair 50 times.
The therapist says that if he isn’t going to be honest, she can’t work with him and that David has said outright that he doesn’t want to participate in counseling. She tells David that he needs accountability like she does and that Shannon is not exaggerating when she say she thinks about the affair 50 times a day. She says they’re doing good things, but they need to recommit to being honest with eachother.

Vicki and Tamra talk on the phone about the fact that Jimmy isn’t around Meghan very much even though they recently got married.

Vicki decides to follow her late mother’s advice and fully enjoy her time in Tahiti.

On the first night, Shannon bails on activities saying she is sick and coughing up something green.

At dinner, Lizzie says she’s pregnant. She says she hasn’t taken a pregnancy test but she can feel it.

Meghan talks about Jimmy, saying that it’s hard to be apart from him. When Tamra says it doesn’t seem like Jimmy is around much, she says he is around 50% of the time. She says it is hard with him going back and forth, but she is here to take care of Hayley.

Tamra says that Hayley has a mother. Meghan gets mad, saying that she doesn’t know how to say another way that Hayley’s mother is sick and cannot take care of her.

In confessional, Tamra says if she were Hayley’s mother it would be hard to watch her ex’s girlfriend take care of her daughter. She says Meghan needs to learn her boundaries.

When Shannon is brought up, Meghan is asked if she apologized. She says that she hasn’t because she isn’t sorry. Lizzie asks her what her problem with Shannon is, saying she doesn’t understand. The women fight with Meghan over the issue until Meghan says she doesn’t want to talk about it anymore.

The women go to an expensive jewelry store where the question arises of what the price threshold is for an item before they will ask their husband before buying it.

Meghan and Shannon, who are stay-at-home moms and spend their husband’s money, get into a fight with Vicki who says that she would ask her husband because she wouldn’t like it if she had a job and her spouse was spending all her money.

Meghan says she does have a job as a stay-at-home mom. Vicki says she isn’t devaluing the work that single moms do but she was referring to a regular job with a paycheck. Vicki says that problems arise in marriages when one spouse spends another spouse’s money indiscriminately and without telling them.

The women go to lunch.

Meghan tells a story about an embarrassing incident that happened at an old job where she sold medical devices. Vicki says that’s a good career, asking her if she still has the job. Meghan says she quit, and Vicki asks her why.
She says she quit because of Jimmy.

“You can still fall in love and work,” Vicki says before Meghan goes on a longwinded explanation of why working didn’t fit into her marriage.