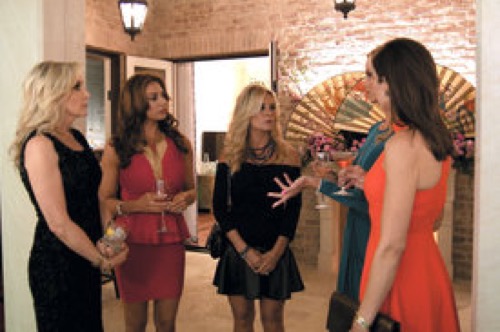 The Real Housewives of Orange County returns to Bravo tonight with an all new Monday September 14 season 10 episode 15 called, “Fire Signs,” We’ve got your recap down below! On tonight’s episode, when Shannon Beador throws an Aries themed party, Brooks finally gets his chance to confront Meghan King Edmonds face-to-face for her relentless digging into his past.

On the last episode the day after Tamra’s sex party, the ladies were still in disbelief over Vicki’s attack on Meghan. Meanwhile, Shannon’s kids cooked up a plan to improve their parent’s troubled relationship. Tamra and Eddie’s date night turned sour when she came clean about financially helping out her son. Plus, Vicki left the OC for a visit with Briana in Oklahoma, but underlying tensions about Brooks brought the trip to an explosive end. Did you watch last week’s episode? We did and we recapped it right here for you.

On tonight’s episode per the Bravo synopsis “when Shannon throws an Aries themed party, Brooks finally gets his chance to confront Meghan face-to-face for her relentless digging into his past. And an off-handed comment by Brooks throws Tamra into a rage.”