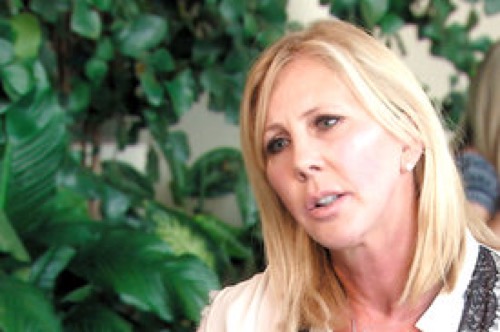 The Real Housewives of Orange County returns to Bravo tonight with an all new Monday September 21 season 10 episode 16 called, “Suspicious Minds,” We’ve got your recap down below! On tonight’s episode, Shannon Beador’s Aries party continues with Vicki Gunvalson and Brooks making an early exit leaving the other ladies questioning Brooks’ behavior and Vicki’s involvement.

On the last episode when Shannon threw an Aries themed party, Brooks finally got his chance to confront Meghan face-to-face for her relentless digging into his past. And an off-handed comment by Brooks threw Tamra into a rage. Did you watch last week’s episode? We did and we recapped it right here for you.

On tonight’s episode per the Bravo synopsis “Shannon’s Aries party continues with Vicki and Brooks making an early exit leaving the other ladies questioning Brooks’ behavior and Vicki’s involvement. Heather and Terry disagree over a design for the new house, while Tamra shows her son Ryan his new home in the OC. Meanwhile, Shannon begins to question her friendship with Vicki.”

Heather decides to take a straight-on approach and tell Vicki about how she has questioned Brooks. She brings up the matter of the doctor, who used to treat cellulite and used to work with Heather. She asks if Brooks is being duped.

Heather asks if the doctor is scamming Brooks by telling him he can cure his cancer in four months using his treatment. Vicki denies that was said, and Heather says Brooks has told everyone that. Vicki says the treatment is to get his immune system up and he is getting ready to do chemo again. Heather asks if she would think someone would fake an illness like this, saying it makes her want to vomit. Heather suggests that Brooks lay it out on the table and express his disgust with the people who are casting doubt on his cancer claims.

Heather goes back to the others and tells them what Vicki said about the treatment Brooks is undergoing. Tamra says that Vicki told her at dinner that he wasn’t doing chemo anymore (a clip plays confirming this to be true). Heather tells them she suggested he go and prove everything, and that she told Vicki nothing was adding up.

Shannon says if he isn’t telling the truth, there is no way Vicki doesn’t know about it because she doesn’t get duped. She says if you’re living with someone who’s having “chemotherapy,” there’s no way you don’t know what’s been going on.

They have agreed about Meghan, who has gone “above and beyond to prove Brooks wrong,” but Tamra also says that everyone is having their suspicions to the point where she herself wonders if he really has it.

Vicki tells her that there is a privacy thing here when Brooks doesn’t need to show anyone his medical record. Vicki asks what he has to do, die, to prove them wrong. She says she can’t believe this, saying Tamra is her friend or she’s not. She tries to tell Tamra not to talk about him anymore, saying that people talking about him and questioning him are not friends.

Tamra says in confessional that Brooks has so much control over Vicki she thinks she’s turning into him.Vicki tells her that if she really cares about their friendship, she would do everything in her power to stop this.

Shannon laments to David that Brooks will not go to any of the world renowned doctors she keeps recommending him. She also tells him about her doubts about his cancer. She says she just wants to know what the truth is, and David says it’s really sad if he’s lying. Shannon says it’s one of the worst things you can do, and she feels bad saying that and that if it were even a possibility Vicki is too smart of a woman not to know what’s going on.

Tamra and Meghan go cycling and Tamra tells her about her conversation with Vicki. She says she told Vicki Meghan wasn’t the only one who had questions, and she got very defensive. She says that if it were her she would just be laughing at anyone making these accusations. Meghan says in 90 days that Brooks will come out saying he got tested and has no cancer, having been cured by the holistic treatment.  Tamra says that sometimes when we just let it go, the truth always comes out.

Terry takes Heather out to dinner now that he’s spending more time with her. Heather tells Terry that she will be meeting with Lisa Rinna because she’s been on HSN with her clothing line. She gets upset when she shows him a tree etching she has planned representing their family, and he makes suggestions instead of being enthusiastic about it.

Heather and Lisa Rinna meet at a restaurant. Heather asks her for tips for HSN, and Lisa tells her to throw the advice people have given her out the window and be herself.

Heather tells her about Terry’s hectic schedule, and Lisa asks her how that affects their relationship as a couple. She says she has been really good about making sure there is dinner on the table and they’re having couple time. She says she spent seven of his months trying to make things easier for him, and now that it’s winding down she wants appreciation.

Shannon meets up with Vicki to address Brooks cancer doubts once again. Vicki says she has so much going on in her life that she isn’t going to deal with that negativity anymore. She brings up Shannon’s cheating struggles, saying she doesn’t feel like she’s had time to grieve for her mom and with that as well as the cancer rumors she doesn’t want to deal with it. Shannon says she has been her strongest supporter and has been by her side, but now they are talking about things she is involved in such as why Brooks never went to the doctors she recommended. Vicki says he didn’t go because he has his own doctor. Shannon asks why he wouldn’t explore all of his options, and Vicki says he did. Shannon says this could be squashed, and Vicki asks if she has to squash it. Shannon says people are coming to her for things she has to answer for, giving the example that Meghan said Vicki claimed she never asked for her help. Vicki acknowledges that she asked Shannon, but says Brooks makes his own decisions.

Vicki says she isn’t Brooks’ wife, she is his significant other and she doesn’t control what he does. Shannon says she’s just trying to understand it. Vicki raises her hands and tells Shannon to call Brooks because she’s done talking about it. She says they should talk about themselves and not Brooks, then asks Shannon what she wants her to do. Shannon says to shut them down by showing one of his lab results. Vicki says she can’t do that, and Shannon tells her to tell him to show it because of what people are saying about him. Vicki tells Shannon that she is having a nervous breakdown, but she continues. Vicki starts breaking down, telling Shannon she told her she was having a bad day. Shannon says she is sorry, and Vicki tells her she isn’t helping. She says she’s asked her to stop it and put a pin in it, but Shannon isn’t respecting that and she doesn’t know what to say. Shannon says all she’s doing is trying to stop the pain. Vicki says she doesn’t want to eat anymore, she just wants to leave and go back to work, and tell her therapist about this now.