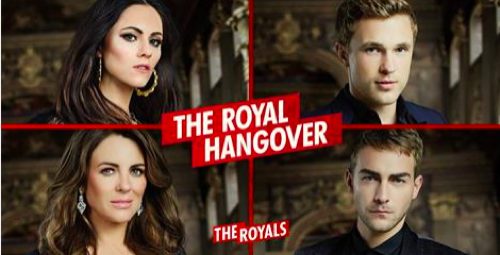 The Royals returns tonight for an all new Sunday, November 15 season 2 premiere episode, called “It Is Not, nor It Cannot Come to Good,” and we have your recap below. On tonight’s episode, in the season 2 premiere, King Cyrus’ (Jake Maskall) new monarch is on full display at the royal polo match.

On the last episode, after lots of scandal and intrigue the first season of The Royals came to an end.  Did you watch the last episode? If you missed it, we have a full and detailed recap right here for you.

On tonight’s episode per the E! synopsis “in the Season 2 premiere, King Cyrus’ new monarch is on full display at the royal polo match. Meanwhile, Prince Liam, who is consumed with getting revenge, receives some unexpected help; and Queen Helena makes a grab for power.”

While watching a polo match, Cyrus tells Elizabeth that it’s clever of her to still be wearing black to keep up the appearance that she is still mourning over the king. She asks him if it has ever crossed his mind that she was actually mourning, which he doesn’t believe, saying it’s been two months.

Cyrus is brought stacks of money, which he money out into a cheering crowd.  “Pig,” Eleanor says. He tells her to smile, saying it’s part of their arrangement. Eleanor tells him that the last king didn’t have to buy everyone’s affection, and he frowns.

Elizabeth shows Cyrus a D-Throned video of Princess Eleanor partying. Cyrus says both she and the prince need to be controlled, and Elizabeth says he is the one who stripped them of their thrones. She says they are more sympathetic than ever. Cyrus suggests they reinstate their titles. He calls them in and tells them their titles will be restored, along with the excess they had enjoyed, but they have to give him respect and apologize. The prince refuses and starts to leave, trying to bring Eleanor with him. However, she chooses to apologize, bending down and kissing Cyrus’ ring.  “Welcome home,” Cyrus says. “See you at the polo match.”

As the two of them leaves, Eleanor telling Liam that if he isn’t going to apologize, he could at least thank her. Eleanor says if they want answers, they need access, asking him if he doesn’t want to know who killed their brother and their father.

A journalist asks Elizabeth if Liam and Eleanor’s titles are being reinstated as PR, which she denies. She says they’ve lost a brother and father, and she lost a son and husband. She says they are having a hard time. The journalist asks if that’s why Eleanor has been in the clubs. He also asks her what she says about Prince Liam going to Gibraltar, which stops Elizabeth in her tracks.

At the match, Eleanor spots Jasper and confronts him. She tells him to stop stalking her, saying that watching her is only the responsibility of a boyfriend or bodyguard, neither of which he is anymore. Jasper asks if she is saying that he was her boyfriend once, which she ignores, and asks her what it will take to get her to forgive her. She says nothing, but gives him the advice that for whatever girl he is going to stalk next, her mother’s vagina is off limits. She storms off.

Liam talks to Mr. Holloway, who says they have nothing to discuss.  “Then why are you avoiding me?” Liam asks.“We have nothing to discuss,” Mr. Holloway says again before leaving.  When he goes out into the hallway, he finds that Jasper has subdued Holloway’s security detail. Liam gets him into a room and has him sitting down in a chair before he pulls a gun out on him and asks him for information about the king. He says he doesn’t know where he was because he wasn’t with him.Holloway says Cyrus promised him he would be Prime Minister.  Leaving, Liam and Jasper talk about Eleanor. Jasper says Eleanor is angry with him for looking out for her, saying he prefers to call himself her guardian angel rather than stalker.

Liam tells Eleanor that he found out Mr. Holloway was with Cyrus, which means Cyrus lied, making him a suspect.Eleanor says that anyone in the palace could be a suspect, including the two of them. Liam shows Eleanor his changed pendant, and she asks him why he didn’t show her this before. He apologizes, telling her he thought he would be able to figure it out. Liam tells Eleanor that he saw Jasper today, and Eleanor says he cannot be trusted. Eleanor says she needs to get high. Liam gets up and turns to leave the room, asking her if she is okay. “Yeah, I’m fine,” she says.

Liam gets his security detail reinstated after interrogating Mr. Holloway. He requests Jasper for his security detail, saying he will back and stay in line if this is done. His plea works. He is asked if there is anything else on his mind, and despite looking poignantly at his pendant, he says no and leaves the room.

Liam asks Jasper what happened between him and Eleanor before their father’s death.Jasper says they had a relationship, “sort of,” and then she had him arrested because he slept with their mom. Liam asks him what was wrong with him, and if he knows that Eleanor has trust issues. He calls him a son of a bitch. Jasper says he looked after her. Liam says he saw the stories in the media, and Jasper says he doesn’t know the half of it. He says after their father’s death, Eleanor was wandering the streets at night. Liam tells Jasper that he had him reinstated as his security detail, but that whatever is between him and Eleanor is his problem to deal with. He shows Jasper the pendant, and when Jasper asks him what it means he says that he wants him to figure that out.

Cryus’ maid Prudence brings up the fact that she is pregnant with his child. He tells her that her body does look a fright but her mouth looks succulent, pushing two 20 bills toward her. Prudence calls him disgusting, and he tells her there may be a Pregnant Wenches of Cyrus support group she can join. She says that group was for Prince Cyrus, but now she is interested in King Cyrus. She threatens go to the press, saying she wants their son to be born in the palace. She tells him that if he follows along with her plan she will tell the press they fell in love instead. Cyrus, however, says he doesn’t care what the public thinks of him and that she should take that money since it’s all she’s going to get.  “I got 99 problems and a bitch ain’t one,” Cyrus whispers into her ear before walking away. “We’ll see about that,” she says under her breath.

Liam attempts to call Ophelia, but her phone goes straight to voicemail.

Jasper comes into Eleanor’s room, telling her he just wanted her to know that Liam has hired him as his security detail. He says he is sorry, and then leaves the room. Eleanor snorts a line of coke and goes and opens her door. Beck is standing right there in the doorway.

Helena looks outside and sees a giant fire. Dutchess Alexandra tells her that war has always been a defining moment for history’s greatest queens. “Do you think they did it?” Helena says. Alexandra says of course, that we kill one of theirs and they kill two of ours. She says the question is what Helena is going to do about it.