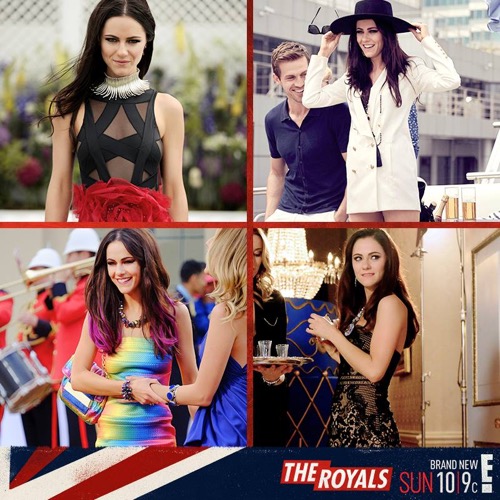 The Royals continues tonight with an all new Sunday November 22, season 2 episode 2, called “Welcome Is Fashion and Ceremony,” and we have your recap below. On tonight’s episode, the future of the monarchy is threatened by Prince Liam’s (William Moseley) quest for vengeance.

On the last episode, in the season 2 premiere, King Cyrus’ new monarch was on full display at the royal polo match. Meanwhile, Prince Liam, who was consumed with getting revenge, received some unexpected help; and Queen Helena made a grab for power. Did you watch the last episode? If you missed it, we have a full and detailed recap right here for you.

On tonight’s episode per the E! synopsis “the future of the monarchy is threatened by Prince Liam’s quest for vengeance. Princess Eleanor, meanwhile, rekindles an old flame.”

Eleanor and Beck wake up in bed together. He gets up and puts his shirt on, telling her that even when he saw her in Monaco he knew it was her. He tells her it has always been her.

Helena asks Rachel if Cyrus is back yet, and she says she thinks he is still meeting with the prime minister. Helena smirks, saying that’s what he would like her to think.

Prince Liam and Jasper go undercover to try to solve the mystery of King Simon’s death. Cyrus reveals to Liam that he has testicular cancer and has been getting treatment, which is why he looked like shit the night his brother’s death. He tells Liam not to tell anyone about it, but he insists he tell Helena.  Liam tells him that if it were revealed people would probably cut him a break, and he says that that’s what he doesn’t want to happen. Liam asks him if he would really rather be a murder suspect than have people know, and Cyrus says he’d rather be a murder suspect than to be pitied.

Liam tells Jasper about Cyrus’ cancer alibi. Jasper says that maybe no one saw the attack because it didn’t take place where they think it did. He says he can try to expand the search area for the investigation.

Jasper tells Liam that he talked to Eleanor to tell her he was back and apologize and that she just acted like she didn’t want to see him. He says he knows he screwed up, and Liam cuts him off and says “you slept with our mother.” Jasper says he just wants a chance to make things right, and Liam says that maybe he can do it at an upcoming party. However, he says she is bringing a guest (Beck, Eleanor’s new beau).

Cyrus punishes Mr. Holloway for giving Liam information by locking him in a small cage.  “I’ve lined your cage in newspapers in case you need to take a shit,” he says, telling him to aim for the Daily Mail.

Jasper attends the party as security and spots Eleanor all over Beck.

Queen Helena continues to blackmail the Prime Minister in her plan to take over as the monarch.

Liam tells Eleanor about Cyrus’ testicular cancer.  He says he’s been thinking about it, and Eleanor tells him his friends are here and he should probably try to have fun.

Beck tries to introduce himself to Jasper, and he ignores her at first. Beck then asks him how long he has been working with Liam, and he tells him he just started and was with the princess first. Beck tells him not to take it personally and that no one lasts with her for longer than a month. Jasper says he was with her for six, all the way up until Monaco, then walks away. Beck continues to stare at Beck and Eleanor at the party. He asks Liam what the deal is with Beck. Liam says he knows that’s not what he wants to hear, but Beck is a good guy. He says he has always been there for Eleanor.

She calls Rachel into the room, and she asks if she killed him. Rachel tries to leave the room, and Helena stops him. “He’s wearing my knickers,” she says. She takes a pair of scissors and cuts the underwear off, asking if it’s too much to ask that the man stays un-dead until one little law passes.  Before they leave, Rachel makes sure to position the Prime Minister realistically. Helena apologizes, saying this must be the weirdest thing she has ever done. Rachel responds by saying “not even this week.”

When Helena emerges, she tells Cyrus about the PM’s death and accuses him of doing it. He says he didn’t, however Helena must be upset since he died before her bill could pass.

Eleanor tells Liam that his quest for vengeance is not what their father would have wanted for him, and he should try to enjoy his life. Liam asks what he would want, them being in a boat and getting high? Eleanor says they may have to accept the fact that they may never find out what happened to their father. She tells Liam to retrace his own steps to find out what made him happy in the past, in the same way he traced his father’s steps trying to find out what happened to him. Liam tells her he couldn’t do this without her, and she says of course not, and he shouldn’t have to.

After apologizing to his friends for being down and telling them that it’s not that he didn’t want to see them, Liam tells Jasper he needs to do some things alone, and he needs him to trust him. Jasper agrees, and Liam says he will keep in touch.

The death of the Prime Minister is announced in the media.

Eleanor walks up to Queen Helena, who is looking at a replica of the memorial she is working on dedicated to King Simon. She tells her that she may fool the public, but won’t fool her children. Helena says the monument is about memorializing their father’s relationship with the kingdom, and Eleanor says she really hopes that’s true.

Cyrus is told his doctor has called and needs to see him at once, that it’s urgent.

The Queen invites the acting Prime Minister out to tea, and she says she will think about it.