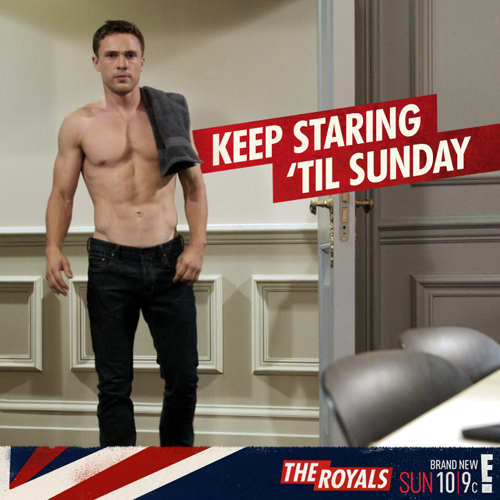 The Royals continues tonight on an all new Sunday, December 13 season 2 episode 5 called “The Spirit That I Have Seen,” and we have your recap below. On tonight’s episode, Princess Eleanor’s (Alexandra Park) new relationship makes waves.

On the last episode, King Cyrus drew a line in the sand with Queen Helena and Prince Liam as he did whatever he could to eliminate King Simon’s legacy. Meanwhile, Princess Eleanor made a friend as a new wrinkle in the king’s murder was potentially revealed. Did you watch the last episode? If you missed it, we have a full and detailed recap right here for you.

On tonight’s episode per the E! synopsis “Princess Eleanor’s new relationship makes waves in and outside of the palace as King Cyrus uses a public ceremony to solidify his image and Queen Helena learns of betrayal.”

Cyrus promotes his maid to take care of him full time, giving her an entire brand new wardrobe.

Lucius tells Queen Helena that Captain Lacey has been nowhere to be found for months and that he was mad at her for what she said about him on TV. Helena asks Lucius why he didn’t tell her that before, and he says he didn’t tell her because she was in the middle of a paternity scandal.

Eleanor wakes up in bed with “Mandy” who receives a mysterious text to meet in 15 minutes. “Mandy” says she has to leave, but Eleanor drags her back into bed.

Helena tells her other employee that she wants him to find out what Lucius is hiding, as she thinks he is lying about Captain Lacey being missing in order not to deliver her letter to him.

The acting prime minister pressures Cyrus to sign the document to make her position official, which he says he isn’t going to do because he isn’t going to give her a position because she happened to be in the right place when the king died. She tells him the same could be said of him, and that if he doesn’t sign, he is going to have a constitutional issue on his hands.

Cyrus says he doesn’t care about the public’s opinion, and she pushes him a newspaper which contains a caricature of him with the words “all nose, no king.”

Samantha (“Mandy”) meets with Jasper in the tunnel, and she asks him why he hasn’t been making any progress. He tells her that a lot has been going on and he was just starting to gain the royal family’s trust, which is why she shouldn’t be here. He tells her to say whatever she needs to say and leave the palace. She goes back inside and tells Eleanor, who thinks she was talking to her agent about a modeling job, that she isn’t going anywhere because she would rather stay there with her.

Eleanor and “Mandy” go out for brunch together. “Mandy” asks Eleanor about her old bodyguard, and she tells her that they kind of had a thing and were both messed up, then he slept with her mom. “Mandy” asks if she really liked him, and she says he was just a good shag, and that’s it. “Mandy” acts unsure of this, so Eleanor tells her it was nothing and that her ex-bodyguard doesn’t compare to her.

Eleanor kisses her, and they are papped and put all over the papers, which Helena chastises her for. Eleanor says she wasn’t trying to make some big statement, and she finally found someone she really likes. Helena tells her being a royal comes with the responsibility of the public spotlight and we can’t just go around doing whatever we please.

Liam comes in, and tells her to tell that to Cyrus, who has destroyed the King Simon memorial.

Cyrus walks in on his maid trying on a red dress from the wardrobe he bought her. He zips it up for her, and she says the promotion is the nicest thing anyone has ever done for her. Cyrus shows her the newspaper caricature of him, and she says people publish stuff like that all the time, asking him why this one should bother him.

Cyrus’ big brother mocks him by saying it seems like he has a thing for maids, and then tells her that she is right, why should this one bother him more than the others?

Cyrus says he never knew what it was like growing up in his shadow, knowing he is nothing more than genetic backup. He tells his brother that he is supposed to support him.

“You could never step out of my shadow because you don’t deserve the sun,” his brother says. “You’re not a king, and you’ll never be one, brother.”

Cyrus storms around looking for Lucius. He tells him to invite the cartoonist who made the caricature of him to the ceremony he will be holding to honor another artist.

At the ceremony, the cartoonist is nervous to meet Cyrus, saying he was surprised to receive his invitation. Cyrus is extremely nice to him, saying that it’s important to be able to laugh at himself, that he found the cartoon funny, and that he was always told his chin is his best asset.

Eleanor and “Mandy” arrive at the event together in colorful mini dresses and holding hands.

When Cyrus gives his speech before giving the medal to the artist, he shocks everyone by saying that it’s about time someone put the balls back in this throne and back in this country, having the cartoonist, who is sitting in the audience, arrested in front of everyone. The artist tells Cyrus he can’t have someone arrested for creating a cartoon, and Cyrus tells him that if he wants free speech, he should go to America, then he kneels down to the other artist and tells him to be careful what he paints.

As they leave, Cyrus’ brother tells him that he can do anything he wants but it will never change the fact that he cannot step out of his shadow. Cyrus tells him he will be forgotten eventually, because all of the nice kings always are, but he himself will be remembered forever.

The acting prime minister tells Liam that they may have more in common than they’ve realized, but Liam suspects her of playing games. A female polo player he met earlier comes in and “accidentally” spills her drink on Liam to get him out of the conversation. Then the two of them leave the party together.

Queen Helena is shown a shell casing that proves a gun was shot inside of Lacey’s cottage.

Helena calls in Lucius to join her for a glass of whisky. She tells him that the strangest thing happened at the ceremony today, and she saw Lacey. Lucius immediately says that that’s not possible. She asks him why, and he says he searched the grounds for him and that if he came around he would know. She says that’s not why he’s so sure she couldn’t have seen him.

She asks him how many times he has lied for her, and if he thinks she can’t tell the difference. He says he can’t tell her, but she demands she tell him what happened, slapping him in the face. He finally admits that he is dead, saying it had to be done for the monarchy. He tells her he couldn’t have Lacey destroy everything they had worked for and that she must understand. However, she opens the doors and has Lucius taken away.

“Everything I’ve done, I’ve done out of love for you,” Lucius says.
“Alister’s not the only one I’ll never see again,” Helena says. “Now walk away.”

Eleanor’s grandma comes and visits her, giving her diamonds as an early birthday present. She says she loves a grand entrance as much as anyone but she can see that Eleanor is doing this to get under her mother’s skin. She tells her that if she’s going to make a statement, she should do it for the right reasons.

Lucius tries to shoot himself since he has nothing to live for anymore. Ted stops him and tells him that he will never have the queen back, but he can do one last thing for her. He tells her that the queen and her children need closure about Simon’s death. Lucius asks if there is any other way, and Ted tells him he has already been fired.

Lucius goes to the authorities and confesses to stabbing the King of England to death.

Cyrus asks Helena about Lucius confessing to Simon’s murder. She tells him he didn’t commit the crime, but is confessing out of some twisted sense of loyalty. She says she is going to let him because he killed Lacey due to the lies she told.

She laments having to look her children in the eye and tell them their father’s murder has been solved, which is yet another lie, and then takes a gulp of her alcohol.

Queen Helena tells Liam and Eleanor that their father’s killer has been found, that Lucius did it because he was furious with their father for trying to end the monarchy.
Liam asks if she is sure it’s true, and she says yes.

“Mandy” tells Eleanor that she thinks her father would have been proud of her, and Eleanor says he would be proud she found someone she really likes. She then confesses that she made the scene at the party with her for the wrong reasons, and apologizes. “Mandy” asks her if she meant what she really said about finding someone she really likes, and Eleanor says yes. “Mandy” asks her if she is the best she’s ever had, including her old bodyguard. This makes Eleanor upset, and she says she doesn’t want to talk about it.

In the tunnel, as “Mandy” storms off, Jasper follows her and tells her she is going to blow the whole con by being out in public with Eleanor. She says everyone is talking about the princess’ new girlfriend, and he is doing everything she can to hide her online identity but the whole con is going to be blown up. “Mandy” tells him that he’s just upset she is getting close to the princess since he actually got attached to her.

He tells her that whatever involvement he had with Eleanor was just part of the con, and Mandy calls bullshit, saying she saw the way he looked at her. She congratulates him for sleeping with Eleanor’s mother. He asks her if Eleanor told her that, and she says Eleanor told “Mandy” everything, including how she can’t stand him. Before walking away, she says that they are going to pull off the con and steal the diamond.