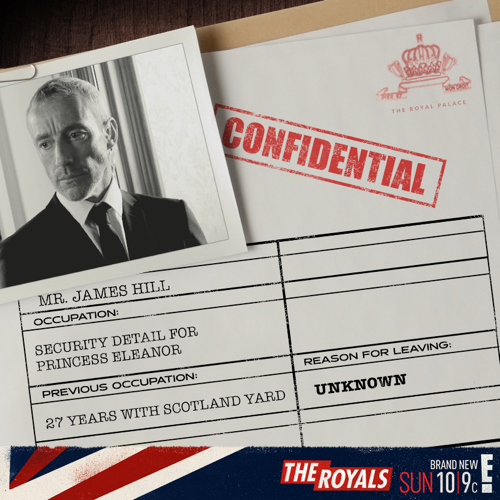 The Royals continues tonight on an all new Sunday, December 6 season 2 episode 4 called “What, Has This Thing Appear’d Again Tonight?,” and we have your recap below. On tonight’s episode, King Cyrus (Jake Maskall) draws a line in the sand with Queen Helena (Elizabeth Hurley) and Prince Liam (William Moseley) as he does whatever he can to eliminate King Simon’s legacy.

On the last episode, Prince Liam and Princess Eleanor both took trips that didn’t end as they expected, while at home Queen Helena met a new rival and King Cyrus received some bad news. Did you watch the last episode? If you missed it, we have a full and detailed recap right here for you.

On tonight’s episode per the E! synopsis “King Cyrus draws a line in the sand with Queen Helena and Prince Liam as he does whatever he can to eliminate King Simon’s legacy. Meanwhile, Princess Eleanor makes a friend as a new wrinkle in the king’s murder is potentially revealed.”

Cyrus wakes up to find that his maid has been waiting basically by his bedside all night. She brings him breakfast and juice.
Before she leaves, he stops her and asks her to stay.  Cyrus turns to the television to see Helena giving a grand speech about how King Simon is one of, if not the greatest, person ever to rule the kingdom. He turns the TV off angrily, then goes out into the hallway and yanks the giant portrait of King Simon off the wall.

Eleanor wakes up and sees more gossip about herself online. She confides in her bodyguard, James, about the conflict she has been experiencing in trying to choose between her vices, drugs and men. James advises her to spend time with a friend.

Jasper asks Liam how he would feel if he sought Ted’s help, and he tells him to do what he needs to do.

Eleanor texts her new model friend, Mandy, and they meet up at the museum. Eleanor arrives with James, but she and Mandy sneak out through a window.

Maribel gets plastic surgery on her face and has her sister, Penelope, peel away the bandages to reveal it. Penelope steps back in shock, and Maribel rushes to get the mirror to see herself. She screams in shock.

Cyrus demands that all of the old currency featuring King Simon be removed from all of England. In a rage, he throws the money into the air and it lands all over the room. As he leaves the room, his new maid picks up all of the strewn about cash.

Eleanor and Mandy smoke a joint. Eleanor tells Mandy that she is supposed to be giving up one of her vices, drugs or men. Mandy tells her to definitely give up men.

Cyrus finds out that his cancer has metastasized, but is told that he should not give up hope and there are many treatments that can help him, such as chemotherapy. This doesn’t make him any less upset, and when he arrives at the palace he drinks a glass of alcohol and throws the glass into the fireplace. He tells his maid that he saw her picking up the money, and that she’s the same as the rest of them. However, she tells him that all of the money is still there, and that she turned the bills down to hide King Simon’s face.

Cyrus announces that the unveiling of the King Simon monument has been canceled, and continues his speech despite being drowned out by boos from the crowd, saying that the decision is what Simon would have wanted and is being made for purposes of solidarity throughout the kingdom. Helena storms into the palace afterward and confronts him, asking him why he feels so threatened by a dead man that he can’t stand to have his name on a piece of glass. He asks her why she feels so threatened by him that he is trying to stop his reign. Helena says she doesn’t care about his reign at all, and that it’s going to end soon anyway.

Cyrus’ new maid pressures him about trying harder to get well.  He tells her he doesn’t know why she’s wasting her time with him. She says that she isn’t wasting her time, and she finds him attractive. He tells her that since he has testicular cancer, there’s probably nothing working down there anyway. The maid disrobes and tells him that it looks like everything is working just fine.

Liam finds out about Cyrus canceling the unveiling of the monument, and he goes out and gives a speech of his own. He says he doesn’t think for a second that Cyrus’ intentions were sincere when he said that he was canceling the unveiling to respect everyone’s opinions on the monarchy. He says that if you don’t believe in or support the monarchy that’s fine, but you should look at the man and think about if he deserves being remembered. He says his father gave his life to make his family and his country better. He asks the guards blocking the monument to step aside and let him unveil it himself.
“Long live Great Britain!” he yells as he unveils it.

Eleanor brings Mandy back to her room, saying that if she knew she could have that much fun she would have ditched the guys ages ago. Mandy kisses her, and after an awkward moment apologizes, but Eleanor says it’s fine. She says that she realized earlier while scrolling through her phone that she has no real friends, only her brother and the monarchy. She says that she just feels Mandy is going to be important to her.

Liam goes and confronts Cyrus, telling him that no matter what he will become it will never be enough.  Cyrus says that he is the King and that is enough. He asks if Liam thought he did anything today, telling him that he just fed sentimental words to a bunch of simple fools. Liam says that he meant his speech. “It sucks about the cancer, but let’s face it,” Liam says before leaving, “you never had any balls anyway.”

Liam finds Queen Helena scaling the walls looking for Eleanor’s weed. He starts helping her, and Eleanor walks in. Queen Helena tells Liam that he is proud of what he did today, and that no one has made her as proud of the monarchy since his father died.

Cyrus shows up to the home of his old maid, and asks her pointedly if she is sure that the child she is expecting (which is his) is a boy, and she says yes.

Fortunately for us all, Eleanor gives into her lesbionic urges and she and her friend Mandy make out. “I was happy when I saw you in my bed,” she says. Mandy responds that it’s about to get a lot happier.

Penelope walks in on her sister Maribel, with her new Playboy bunny face, and says she looks beautiful. She asks her if she is still going to hang out with her now that she looks like this, and she says of course. She adds that ‘you were always the hot one, and you still are,’ but Penelope does not look convinced.

Cyrus goes on a drunk driving bender and gets in a minor accident.

Mandy wanders around the palace in Eleanor’s Motorhead shirt. Jasper walks in the room and asks her what she is doing here, calling her by the name Samantha. “Just finishing what we started, baby,” she says before she and Jasper make out.