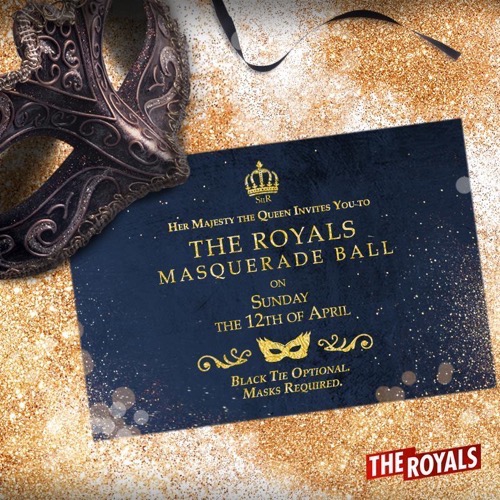 The Royals continues tonight an all new Sunday, April 12 season 1 episode 5, called “Unmask Her Beauty to the Moon” On tonight’s episode, The annual masquerade ball turns out to be a night to remember for Prince Liam. [William Moseley]

On the last episode, Prince Liam embarked on his first PR tour as heir to the throne, while Queen Helena forced Princess Eleanor to launch her own promotional campaign in London. Did you watch the last episode? If you missed it, we have a full and detailed recap right here for you.

On tonight’s episode as per the E! synopsis “The annual masquerade ball turns out to be a night to remember for Prince Liam, Princess Eleanor and Queen Helena as the nature of each of their romances becomes clear over the course of the evening.”

Eleanor appears to be playing matchmaker on tonight’s brand new episode of “The Royals” and she could have chosen two more stubborn people than Liam and Ophelia to pair up. You see last week, Ophelia got jealous of Liam’s closeness with his ex-Gemma and she went on to make a decision that she eventually came to regret. Like playing on someone else’s feelings just so she can hurt Liam. However instead of apologizing, even when she knew she was wrong, she chose to take Liam up on his bluff and was bringing a date to his family’s event.

Meaning the plan did work somewhat. Liam was captivated by Ophelia and more importantly how she looked in her dress but what kept him from going to her was the date by her side.

Apparently, Liam is just not into complicated love triangles. They’re not his thing and he wishes to be the bigger man in such a situation. So for Liam, he was prepared to treat Ophelia’s date with respect.

Though, funnily enough, complicated love lives seem to be right up Liam’s family tree. Because while Liam was being gentlemen, his mother was off hiding in a secret enclave with her lover and his sister continued her love/hate affair with bodyguard Jasper. Now, typically, both relationships are mainly carried out on the down low but this week the ladies chose to throw caution into the wind.

Eleanor surprisingly tried to seduce Jasper before they could even leave the dance floor. And later, despite her best hopes that they would later finish what they started, she found herself abruptly turned down for a quickie when Jasper decided to point out to her who was in charge of their relationship. As it turns out – not her!

He’s calling the shots and he reminded her that she could end things at any time if she only told the truth. But when given the opportunity – Eleanor didn’t want to end whatever they had going on. Though, one thing was for sure. They had in fact moved on past the blackmail.

Eleanor’s mother, however, wasn’t working with such blurred line. For it seems the Queen loved someone else before she married the king. And it was revealed that there’s always been a part of her that has regretted no waiting for her first love.

So that’s why she’s now being reckless. But at least she’s not as bad as her brother-in-law the Duke of York. Because remember that maid he had forced into “servicing” him a couple of weeks ago – well he’s still trying to manipulate that young woman and, really, people can only be pushed so far.

The maid was ordered to go Cyrus’s room and wait for him. Yet she brought something else along with her. And then she poured it in his drink without him knowing.

But sadly for her, she had underestimated Cyrus. For unbeknownst to all his sexual partners, both willing and helpless, he had previously installed security cameras in his bedroom. So he knew what the poor, unfortunate maid was trying to do long before he told her she was caught. And once she allowed him to get dirt on her, such as trying to drug a member of the royal family; guys like Cyrus tend to use it to their best advantage.

In the meantime, though, Eleanor decided to call a halt to her own uncomfortable routine and she took an impromptu vacation to Monaco with her brother and Ophelia. Thus leaving the likes of Jasper and Gemma behind.

As for Liam, he finally told Ophelia that he wanted to fight for her and that seems to be all she needed to want to try again.