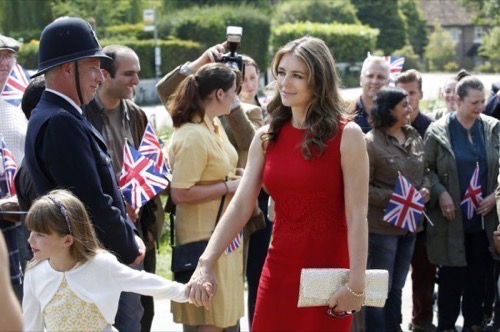 The Royals continues on E! tonight with an all new Sunday, April 5 season 1 episode 4, called “Sweet, Not Lasting,” and we have your weekly recap below. On tonight’s episode, Prince Liam [William Moseley] embarks on his first PR tour as heir to the throne.

On the last episode, The Queen and Princess Eleanor staged competing fashion shows, while Prince Liam narrowly avoided catastrophe. Did you watch the last episode? If you missed it, we have a full and detailed recap right here for you.

On tonight’s episode as per the E! synopsis, “Prince Liam embarks on his first PR tour as heir to the throne, while Queen Helena forces Princess Eleanor to launch her own promotional campaign in London.”

On tonight’s all new episode of “The Royals” Queen Helen appears to want to drum up some good press for her children and so like usual she has managed to bully them into doing what she says. Only this time Princess Eleanor and Prince Liam actually seem like they do want to go through with their mother’s plans. You know instead of just merely doing whatever they liked and essentially crapping all over their mother’s original idea. So upon hearing the good new (i.e. their agreements) the Queen, at first at least, thought she won.

She got Liam to go on tour and she had her daughter agreeing to do some charity work. Yet, unfortunately for her, her children tend to be screw-ups. No matter the case or their temperament. So when Eleanor agreed to do a charity visit, even going as far to check in with her later brother Robert’s charity; that should have been a PR dream for the Royal family. However Eleanor chose to show up for her round of visits, beginning with a stop at a retirement home, high.

Thankfully, though, she had Jasper at her side and he was able to pull her away from a potential media nightmare. Meaning he stopped people from realizing how out of it she was. And on top of that he was kind enough to keep up this particular duty for the rest of the day.

Liam on the other hand wasn’t so lucky. Because he ended up breaking a cardinal rule. You see he simply assumed a woman with a wide girth was pregnant and so he didn’t know how wrong he was until he had already offered up his congratulations thereby insulting the poor woman in front of the whole world via the press.

Gemma had also been invited on the tour and it was her duty to act as the Queen’s lady in waiting. Yet while she generally comes off as Helena’s lackey – she chose to side with Liam on what public persona should be and was the one to give him the advice. Which he took by the way and it ended up working in his favor.

The royal tour that had started out all rocky and awkward suddenly became a success overnight when Liam stopped trying to be Robert and chose to just be him.

And by being himself, Liam learned a few things. The “job” isn’t just about the royals getting to keep all their luxuries. They actually have a duty to perform and they have people depending on them.

So he chose to help out another young man who was bound to inherit the family business. And in doing that someone at least got to live out their dream.

Now Helena also tried to lend her royal name in doing something good but unlike Liam she ran in a roadblock. Namely a republican who called her brat and had asked that she leave him alone so that he may go back to work in order to pay the very same taxes that funds her lifestyle.

And Eleanor, once she was sober, was finally finishing up with her charity merry-go-round when she chose to make Robert’s her last stop. However, what she never expected it to be was a stop a publicly funded detox facility that targets helping out addicts. So her visit there made her take a long hard look at herself. And she didn’t like what she saw.

Yet that didn’t mean she was ready to get help for herself. If anything it just made Eleanor go to a really dark place. In which she tried to use drugs and Jasper to make herself feel better.

Then, when Liam was close to getting bearings and was even excited to tell Ophelia all about it, Ophelia chose to hurt him after she saw a picture of him and Gemma on tour together.

She posted a picture of herself and another guy hanging out together on her Instagram page and later followed up that picture with a video of them nearly kissing. So when Liam came back, he brought tickets. One for her and one for her boyfriend to the upcoming masquerade.

And as for that man that had insulted the queen, his distillery mysteriously burned to the ground that very same day.