BY Kristine Francis on May 3, 2015 | Comments: one comment
Related : Recap, Television 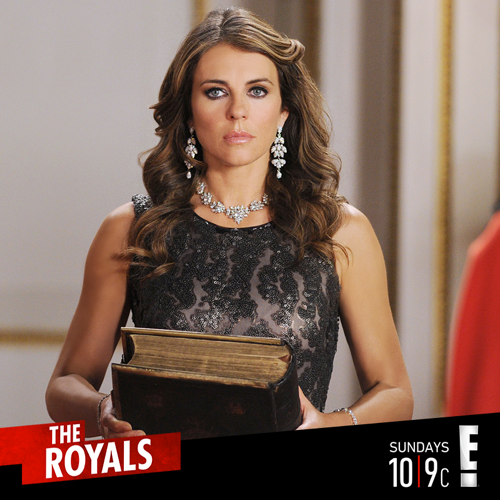 The Royals continues tonight an all new Sunday, May 3 season 1 episode 8, called “The Great Man Down” On tonight’s episode, an assassination is attempted.

On the last episode, the king made a decision that impacted the rest of the family; at the same time, Ophelia struggled with the PR fallout from Monaco. Did you watch the last episode? If you missed it, we have a full and detailed recap right here for you.

On tonight’s episode as per the E! synopsis “An assassination attempt puts the royal family on lockdown inside the palace safe room.”

The King is down and now is the time for the Prince Regent to prove himself. However, before he could do just that on tonight’s episode of “The Royals”, the prince simply has to be another member of the Royal Family that’s trapped in the bunker from hell.

Apparently, it’s protocol to take the royal family to the safe room if a threat was ever to occur. And the King getting stabbed – not far from the palace grounds – is a threat. So everyone was immediately rushed into the same room. But with all of them stuck together, it was only natural that threats and accusations began to fly.

Why was Cyrus in the room before anyone else? Technically, he’s not the regent and so he wasn’t considered first priority by the security team. And on top of that, Ophelia who was also in the bunker claimed she saw Cyrus leaving the palace not that long ago.

But, see, Cyrus is not the type of man that would willing allow himself to be cornered. So he called Ophelia, who was only there because of her status as the Regent’s girlfriend, a liar. And he then he asked Eleanor what was on her hands. Particularly as it looked like blood.

It wasn’t blood, it was actually paint that Eleanor had used to trash her room. But she didn’t trust her uncle either and so she was another person that was questioning his involvement in her father’s attack.

Thankfully, things did manage to cool down somewhat after everyone was let out but there was those that were angry and those that were accusatory. So, true to form, the Royal family ended up being the very same powder keg that the King always feared they would be. And oddly the only calm one was the Queen.

She blamed the head of security for her husband’s accident and she quickly offered her help to her still young and semi-impressionable son. So in a way, no matter how it ends, Queen Helena has ensured a place for herself within the coming days. And already Liam is leaning on her instead of others like his girlfriend for instance.

But what about Eleanor?

She only recently decided to go clean and was doing well. So the sudden tragedy tested that resolve. Luckily, however, she had Jasper and despite their past he did the one thing she needed – he took her to her father. And seeing the kind for herself made it all just a tad less scary.

Eleanor stayed with the King for as long as possible and then, strangely, she didn’t put up a fight when the Queen ousted her from the room so that it was only the Queen and the Regent that was with the king.

Thus Jasper later went to Eleanor believing she needed him to comfort her. But what he didn’t know was that Eleanor, the one he knew at least, no longer trusted him. And why should she? After all he’s Jasper of dubious family organs and Las Vegas. He faked an accent and got a coveted job at the Place. And here’s the thing, the princess he was sleeping with had found his cufflinks in her mother’s bedroom.

So Jasper didn’t see nor would he have guessed that Eleanor would be the one that would turn him over to the authorities.

And after she had did that, she accused him of playing a part in her father’s attack. It seems she created a story about him being in love with the Queen. So unless he’s cleared then, with a past like his, he might be looking at a life sentence.

However, does Eleanor really believe that story? Because, when she confronted her mother, she didn’t bother mentioning her dad. Instead, she said that Jasper had been arrested for sleeping with the Queen.

A charge Helena didn’t bother denying. No, according to her mother, the Queen wanted to test Jasper and see if he was sincere in his feelings about Eleanor. And so the Queen isn’t a cheating harlot, she’s merely concerned mother.

Yet the truth about her came out and at the worst time.

See, Liam never bought her story about supporting him. So he was going to sign the referendum regardless of what she wanted. But what stopped him from officially becoming regent was his uncle. The same uncle that stood to inherit everything after he publically accused the Queen of adultery and claimed Liam (and his twin sister Eleanor) were illegitimate.

It was dicey game that Cyrus was playing. Though once he knew he had the Queen’s support – they put on a big show in front of everyone.

Unfortunately while Liam may have believed he was playing his mother, Helena was playing him too. And she knew he was going to ahead with the vote to abolish the monarchy and that’s why she didn’t care about burning everything down.