The Strain Recap – Mommy Dearest Is There: Season 2 Episode 6 “Identity” 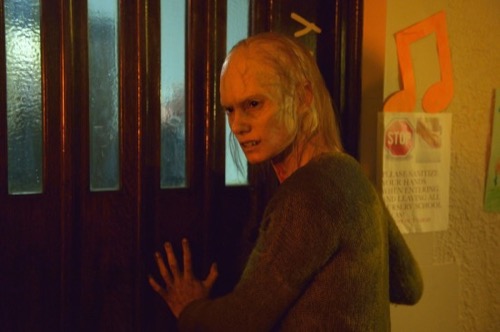 Tonight on FX The Strain airs with another all new Sunday August 16, season 2 episode 6 called “Identity,” and we have your weekly recap below. On tonight’s episode, Kelly [Natalie Brown] goes after Nora [Mía Maestro] and Zack. [Ben Hyland]

For those of you who don’t know, the show is about a vampiric virus spreads through New York City.

On the last episode, Eph alters his appearance so he could leave the city, which made Nora a reluctant parent for Zack. Meanwhile, Dutch and Nora negotiated with Justine to got Fet out of jail. Did you watch the last episode?   If you missed it we have a full and detailed recap, right here for you.

On tonight’s episode per the FX synopsis “Kelly goes after Nora and Zack; Eph hatches a plan to create and deploy a biological weapon; Gus finds an unlikely ally in Angel.”

Tonight’s episode looks like it is going to be a great episode and you won’t want to miss it, so be sure to tune in for our live coverage of FX’s “The Strain” season 2 Episode 6 at 10 PM EST!

#TheStrain begins with a homeless guy asking for help and Quinlan being delivered onto the snowy streets of New York. He ignores the guy and walks away. The driver tosses the homeless guys the keys to the truck and says there’s shrimp in the back. She drives Quinlan away in a dark sedan while the homeless guy thanks her. In DC, Robert gets out of his car and vomits. Eph waits at his house and sees him puking. They hug in greeting. He asks Eph what’s going on and says they should go inside.

Eph tells him there is some massive miscommunication about what’s going on in New York. Eph shows him photos of the patients he used to develop the bioweapon. Eph says they need Kemerell then need the DOD to spread it. Eph says they’re not humans anymore. Fet and Nora introduce Zack to Fitzwilliam. He goes to eat in his room to get away from them. Nora asks him if his dad said how long he’d be gone. Nora says it could be a while before he’s back. Zack says he’s used to it.

Gus talks to Angel as he cleans up. Gus talks to him about his favorite Angel moves. Angel snaps and tells him to shut up then says he’s Angel de la Plata and asks him to just stop talking about it. He limps out of the kitchen. Annya shows Gus a movie that Angel keeps watching over and over and he sees it’s the one where his leg was injured so he could never walk again. Eph and Robert see the news about the President being nominated for impeachment over the mismanagement of the virus.

Robert’s friend Leigh shows up. Leigh says Everett Barnes fell off a train on the way to DC and died. Robert stares at Eph. Leigh asks about Eph’s plan to save the world. He shows her the research and she says it’s brilliant. He says it attacks the cerebro-spinal fluid. She asks about adding a steroid but he says you don’t need it. Leigh says this will kill three million and Robert says this will be as big as the polio vaccine. Eph says it can’t be done in stages. Leigh asks his angle and he says he lost a good friend to it.

He says his friend lost his wife so it’s more than just an outbreak to him. Leigh goes to make a call. Robert says Barnes is none of his business and says to be quiet about it. Leigh says she’ll pitch their chief research officer with her full support. Fitzwilliam shows them a map of where Palmer has been buying properties and developing them. He says he was meeting with Eichorst but they always made him leave the room. He says they’re using developers that build black sites and prisons.

Aanya leaves with Gus and Angel both. They walk and Gus asks about her school – she says she’s pre-med then says her parents want that for her. But she says now everything is changing. They go up in an elevator and look around cautiously. Gus tells Angel that he went to prison and was a thief. He says he broke his mother’s heart and now he’s nothing. Aanya knocks on the door. The woman pays her and then a monster is there. It attacks and Gus takes it out. Another comes up behind them.

Gus kills that one too but Angel’s knee is hurt. Gus helps him to the elevator. Eph talks to Leigh about his time with Doctors Without Borders and talks about how the military decided they were infecting kids and locked him up as a spy. He says then a guy showed up and said he was Doctors Without Borders and got him out. That was Robert but he was really State Department. Leigh says she knew Robert was a spy but he demurs. Leigh gets a call from Jonas.

She says the CRO wants a meeting tomorrow. Eph is thrilled. Robert says this is step one and says he has a date and tells them to have fun. He leaves Eph his keys and says to let himself in. Leigh flirts. Eph starts making out with her.

Eph wakes up and hears Leigh on the phone with Robert. She says Robert was worried about him and Eph tells her that some people don’t want this disease stopped and she says to bring them on. She asks him to sign an NDA but he says it’s a waiver to sign it over to Kemerell. Eph is furious and says the world is going to hell and they’re only after in their own interests. She tells him that’s how these things always work and he signs. Quinlan talks to the Ancients about New York.

He says he can see why his father started there and says they indulged him too long and he should have been stopped 70 years ago. He says he trained Vaun and he failed so he’s here now and will stop him. He asks who got close enough to hurt the Master and says he needs human hunters to help during the day. Nora spots Justine at the crisis center and she says Red Hook is just a day or two away of being infection free. She tells Justine about Zack and she sends them a driver to take them home.

Eichorst is pleased with plans when Palmer shows up and they talk about human foibles. Palmer says the Ancients attacked him and Eichorst says the UV laser trap worked well and asks what other devices Palmer has in his place. He says he wants to talk to the Master and asks if he’s hurt and what Eichorst is keeping from him. Palmer says he has to know that the plan is not in jeopardy before they proceed. Eichorst offers assurances but Palmer says he won’t have that. Eichorst says he won’t give that message.

Robert and Eph meets with National Guard leader David and he asks if he’s been to New York personally. Eph says the city is eating itself. David says they need a company like Stoneheart. Eph says not Stoneheart. David says to get him a canister of the material so they can field test it and then he’ll help make it happen. A cop drives Nora and Zack home. He dozes off. The car stops when someone runs out in front of it. The cop gets out to see what he hit. A feeder snaps the cop’s neck.

The car is surrounded. Nora tells Zack to run into the church. She shoots at the feeders then they run for the church. Nora shoots the lock off then closes them in the church and bars the door. Zack asks if that was his mom. Abe chats up Fitzwilliam and says not to wallow in guilt and quotes Shakespeare. Nora calls Abe and he tells Fet to weapon up. Kelly shakes the doors of the church then her feeders climb up the walls of the church and kick in the stained glass windows.

One comes inside and unbars the door for Kelly. They run deeper into the church and hide in a classroom. Zack’s asthma is bothering him. The feeders track them and Kelly follows. They sniff at a cabinet. Kelly opens the doors and it’s Zack’s sweater. They lock them in and run off down the hall trying doors. They come back to the vestibule and hide behind a wall. Zack coughs and Nora covers his mouth with her hand. Kelly and the feeders are there sniffing around. They leap pew to pew.

They spot them and Kelly shoots one. Then Abe, Fet and Fitzwilliam are there and they open fire. Nor warns that they’re fast. They kill one and another is behind them. One gets Fitzwilliam in the leg and Abe lop its head off. Kelly is there and Fet takes some shots at her. Fitzwilliam tells Abe he knows what that means. He says not to let him become one of them and Abe says there’s no other choice. He says to get Zack to the truck. Abe thanks him for his help and he says to tell his brother he tried.

Abe lops his head off quickly sparing him any pain. Eph is at a bar when Leigh meets him. She says Kemerell went for it and says they can have an answer in three days. He kisses her and he says he wishes he could walk it through himself. He says it has to go through as fast as possible. She says they’re testing it tonight. They toast the future. They leave together and go looking for Rob to tell him the good news. They call him and the call goes straight to voice mail. She says it hurt when he got mad about the NDA and he says he doesn’t know who to trust now.

They had upstairs shedding clothing. He says they should keep half the sample to themselves. They find Rob dead upstairs and Leigh screams. She goes to call 911 but then a gunman is there. He says Eph’s name then shoots Leigh dead. He shoots Eph once but Eph shoot back killing him. Leigh asks who he is and then dies. He cries. He checks the guy’s phone and sees a Stoneheart logo on it. Eichorst and Bolivar go see the Master who is still transforming.

Eichorst tells him he’ll see something extraordinary. He approaches the coffin and a clawed hand reaches out. The Master sits up. Bolivar creeps closer. Eichorts tells him he’s ready to receive his infinite power. Eichorst closes his eyes and waits. But instead the Master chooses Bolivar. Eichorst is upset. Eichorst interrupts but he ignores him and spews some goo into Bolivar’s mouth. The Master’s old body collapses and Eichorst runs to him.

Bolivar touches himself and pulls off the wig while Eichorst cries over the Master’s body. The Master speaks from Bolivar’s body and calls Eichorst his special child and says they’ll be together for all time. Eichorst kisses his hand and says forever.