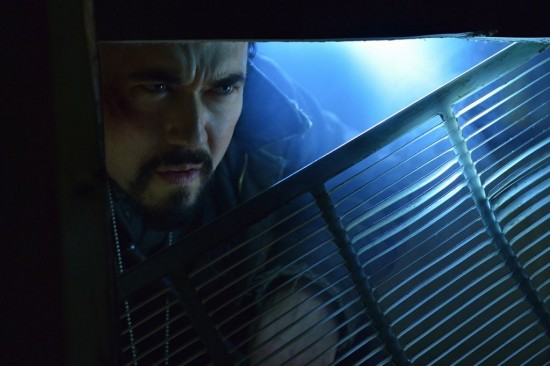 Tonight on FX The Strain airs with another all new Sunday August 9, season 2 episode 5 called “Quick and Painless,” and we have your weekly recap below. On tonight’s episode, Eph [Corey Stoll] alters his appearance so he can leave the city, which makes Nora [Mía Maestro] a reluctant parent for Zack. [Max Charles]

For those of you who don’t know, the show is about a vampiric virus spreads through New York City.

On the last episode, Fet took charge of security in Red Hook; Dutch and Setrakian headed for Staten Island to look for Fitzwilliam, Palmer’s one-time bodyguard; Eph and Nora witnessed their virus in action. Did you watch the last episode?   If you missed it we have a full and detailed recap, right here for you.

On tonight’s episode per the FX synopsis “Eph alters his appearance so he can leave the city, which makes Nora a reluctant parent for Zack. Meanwhile, Dutch and Nora negotiate with Justine to get Fet out of jail.”

Tonight’s episode looks like it is going to be a great episode and you won’t want to miss it, so be sure to tune in for our live coverage of FX’s “The Strain” season 2 Episode 5 at 10 PM EST!

#TheStrain starts in Red Hook in Brooklyn with people storming into a housing project. The police knock on doors and tell them it’s a mandatory evacuation. A guy says his wife is sick but they make them go anyway. They find an apartment with infected people in it. They shoot them and move on. They are in the last place. They find a kid in the last apartment. The cop kneels and the kid attacks.

It’s one of the feelers. They try to kill it but it skitters all over like a big fast spider. Two cops head to the stairwell to evacuate and a feeler attacks them and then they shoot at it and it goes up into a vent. The two cops are down. On the rood, the feelers come back to Kelly who croons to them. Eph is at a gay bar and says he’s a friend of Dutch. He’s admitted to a back room area. He’s getting new names.

He knows Eph’s name from the news and asks how life is as a fugitive then says he doesn’t give a shit and says he should also change his appearance. Abe comes to see Green and says he wants to buy the Occido Lumen and hopes the book might surface. The guy usually sells guns and fake IDs. He offers Green something of value and the guy tries to steal it. Abe puts a sword to his neck.

It’s a standoff and Green says he just bought some old books and they back it all down. Eph tells Zack they can reset this thing and go home but he says he won’t go home without mom. Eph says he’s hoping for something that’s not possible. Zack says he can’t make him go. Nora says traveling in the group of three will attract attention. She says she should stay behind with Zack.

Dutch comes down and says Fet was arrested by the Staten Island wacko. Nora and Dutch head out to try and get him loose from Feraldo’s people. Eph goes to try and change his appearance. He shaves his head and pulls off his wedding ring and is totally transformed. He tells Zack he’s going to stay with Nora and his son says he should stay there too but Eph says he has to go and try and stop this.

Nora and Dutch find chaos at the detention facility. Feraldo says she wants them back in their homes but their homes aren’t safe. She says they have to get their neighborhoods back and says they have to quarantine those with symptoms. Nora introduces herself and says three says is too long and she can diagnose in just a couple of hours. She says she has to do something for her first.

They go pull Fet out of the room he was in chatting up some others. Fet explains he’s an exterminator and tells the guy in charge he uses silver grenades and UV light. They tell them about the little spider kids. Dutch and Fet don’t know about them. The guy in charge asks Fet and Dutch to come along and see if they’re still there. Eph is part of the horde trying to get off the island.

He hands over his CDC ID and is asked for his driver’s license but says he doesn’t drive. He gets past the guard and heads for the train. He’s apart from the rioting crowd of regular citizens who are stuck and can’t get away.

The train is almost empty. He sees his boss in the dining car and ducks away. He sits a ways away with a stranger. Abe looks through Green’s books and doesn’t find what he’s looking for. He tells Green it may have a silver cover. He shows him a gold Patek Phillipe watch and says it’s a down payment. Then he shows him another and says it’s extremely rare. Green says he may know someone who has it.

He leaves Green his card in case he finds it. The guy asks Eph what department he’s with and he says CDC. The guy says he’s a lawyer with the Energy Department and got caught in the quarantine. He says he’s Neil Archer. He says his name is Jonathon Crawley. The guy says he looks familiar. He asks if he picked the drinks up in the bar car and says he’ll be back. He stares back at Eph then walks out.

Eph grabs his bag and walks out of the car. Nora checks over possibles and lets Feraldo see how to confirm infections. Feraldo asks her to look at someone else for her. She says it’s her nephew Mikey who got knocked down some stairs. Feraldo can see he’s infected when Nora turns the lights on him. Feraldo asks what they can do and Nora says there’s nothing to do and says the worms are all in him.

Feraldo is stunned and curses. Fet and Dutch go with the police to the building where the spider kids are and they find some infected. Fet demonstrates silver. The cop then puts a bullet in each head and Fet is impressed. They go into the apartment where they saw the spier kid and hear water running. Dutch gestures. They knock back the shower curtain and see nothing. Then they hear a thump.

Fet looks at the wall vent that has been disturbed and touches the wall like he would if he was following a rat infestation. He jabs rebar into the wall then ducks back as a vampire tongue comes out. He nabs it and they have it nailed. They tell Fet the elevator isn’t working and he pries the door open. He checks the shaft. They toss a silver grenade down there and wipe out a stack of them.

The police guy says now he gets the silver thing. Feraldo sits with her nephew and Nora says she has the morphine. Feraldo says maybe they should wait until he turns but Nora says it’s not better. Feraldo says she used to read Goodnight Moon to him. Nora gives her the needle to push into his IV. She can’t do it so Nora does it for her. Abe realizes someone is following him and pulls his sword.

It’s Fitzwilliam. He tells Abe he’s ready to help. Eph is in another car drinking his beer when he sees his boss coming. He ducks down in his seat then gets up to walk to another car. He ducks into a bathroom. Someone knocks on the door and says it’s security. He says he’ll be out in a minute. They say it’s a mandatory medical inspection. He flushes and opens the door. They ask if he’s feverish. He says no.

They check him out. They ask to se his ID. He steps into another car and runs right into his old boss. Eph tells him he’s not letting him get in his way again. Eph says he has a way to wipe them all out and take care of this. He says he’ll let him go. He tells Eph he’s glad he’s still trying to do something about his. Eph says he’s lying and he says Barnes is lying and hits him. They grapple.

Eph beats him down and goes out on the area between cars. Barnes follows and Eph opens the door and throws him off the train. Palmer takes his Marchand out to dinner and says it’s a nice reminder of normalcy. He’s greeted with a round of applause. They toast with champagne. Cardinal MacNamara is there and Palmer introduces them. The Cardinal says a certain item he wants may turn up soon.

Palmer asks him to go on. The Cardinal says he’s waiting to hear from a contact and will be in touch soon. Marchand asks what that was about soon and Palmer says he gets historical items for him sometimes. Back at his place, they see a building across the way burning and he makes a poor joke about them not having to light the fireplace. Palmer says he wishes he knew how to introduce her.

He says calling her his assistant doesn’t do her justice. He says if he says nothing, people will make assumptions. She says he shouldn’t care what others think. They have a cocktail. She takes his glass and sets it aside and offers him her hand to dance. He says he’s feeling tired. She asks if he’d like a glass of warm milk or a blanket. She pulls him up and he says he’s not ready for the nursing home yet.

They dance around while the building continues to burn. In DC, the train pulls up at Penn Station and Eph hops off and he sees Barnes’ people looking for him. They have his briefcase and wonder why he’s not gotten off the train. He goes to a checkpoint and offers his ID. Then they ask to check his bag. He opens it. They guy asks what it is. He says it’s a personal item and says it’s his wife’s ashes.

The guy lets it go at that. Eph makes it out and down the stares before anyone who knows him can notice. At Somerset Airport in New Jersey, an SUV pulls up and a private plane says their client was sick and they had to land. They tell the guards that he left and went that way and they point. They tell the crew to go in the hangar and wait. The dogs take off and go through a break in the fence.

A car pulls up and the person from the plane gets into the car. The driver says they’re good to go and they pull away. It’s Quinlan, son of the Master – who hates his father and serves the ancients.