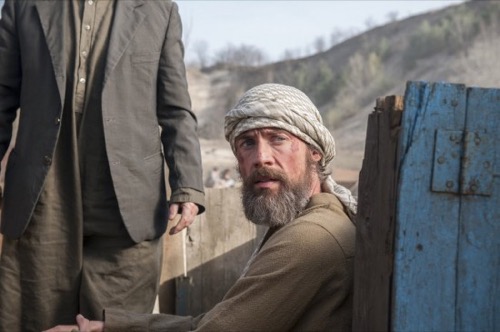 Tonight on FX their original series, TYRANT airs with an all new Tuesday June 30, season 2 episode 3 episode called, “Faith,” and we have your weekly recap below! On tonight’s episode, Barry finds refuge with a Bedouin family who have no choice but to take him in. Meanwhile, Jamal [Ashraf Barhom] is stunned by Tariq’s military tactics; Molly [Jennifer Finnigan] gets help navigating the Al-Fayeed family trust; and Leila’s[Moran Atias]  plans to make Abbudin a cultural hub hit a snag.

On the last episode, on the verge of death, Barry scoured the desert for salvation. Jamal grappled with the loss of his brother. The reality of Barry’s death set in upon Molly’s return stateside as she struggled to adjust to normal life. Did you watch the last episode? If you missed last week’s episode we have a full and detailed recap, right here for you.

On tonight’s episode per the FX synopsis “Barry is taken in by a Bedouin family, who are bound by hospitality and custom. Jamal is distraught over Tariq’s drastic military action. Molly reconnects with a classmate who helps her navigate the Al-Fayeed family trust. Leila’s plans to put Abuddin on the cultural stage are derailed.”

General Tariq is truly an evil man. It seems that after he had grown tired of Jamal’s “pandering” he then decided to take things into his own hands. Thus he was the one that decided to use Saran gas against his own people and on tonight’s episode of “Tyrant” it’s now up to Jamal to deal with the fall-out.

So Jamal’s first decision was to not kill his uncle.

According to Tariq, only two things could happen after such an incident. Jamal could either blame his uncle for this act of war or he could claim it was the opposition. But Tariq swears that, no matter the case, no one will remember will care about what’s happened in the next few months.

In the meantime, though, all of the Al-Fayeed’s friends appear to be making a run for it. The Louvre no longer wants to host an exhibition on Abbudin. And the Chinese Ambassador, who was already weary, had to demand a formal investigation conducted by the UN.

His government refuses to go ahead with any trade in oil until there was at least proof Jamal’s claims. Unfortunately, Jamal took his uncle’s advice and he was telling everyone that his army accidentally hit the opposition’s chemical weapons. Although, as he says, they never intentionally wanted to hurt so many innocents.

Yet, even as Jamal is dealing with all of this, his brother Barry has somehow found safety.

Two young men found him out in the desert and they brought him back to their village. Originally, they were going to return this man wearing a prison uniform in exchange for reward. Though, once he got to the village, he convinced their families to harbor him. Even nursing him back to health.

Barry had told them a story about himself. He said he was an army doctor that had deserted after disagreeing with the government. But when one of the men tried to sell him, regardless of how his family felt, he realized Barry must have lied because there was no record of a missing prisoner. And that’s how Barry found himself again in trouble.

Back in the capital, Ihab’s supporters have begun to abandon him in droves. They believe he’s the cause of everything that happened and that he was the one that brought this disaster onto their families. And so, right then and there, Jamal’s family felt safe.

They knew they had mostly disbanded the enemy and they went about their lives accordingly. His son started crowing about all the people “they” murdered. And how they deserved it for nearly assenting his father.

As for his wife, she no longer feared go outside and so the first thing she did was plan a highly publicized hospital visit.

However, some didn’t take too kindly to her publicity stunt. Leila was later corned in full view of the cameras only to have blood thrown at her.

Then, in the states, Molly decided to wrap up her husband’s estate but it ended up coming with strings attached.

Molly had believed her husband was disinherited yet the truth was something very much different. Apparently, Barry’s father had hoped his son would one day return to the family so he never made moves to cut ties. And rather than be disinherited, Barry came into a trust fund for a hundred million dollars that he never once used.

The trust fund only affects the male Al-Fayeed line so even though Emma has much right to inherit – she got nothing. And her brother went on to tell her that it would be ok. He said eventually she would settle down with a nice guy with a good job.

But in regards to Barry, he had a lot of explaining to do. He apologized for lying when the family that was helping him then demanded answers. Though he swore he did so to protect both himself and the people that helped him.

He still is an enemy of the state and so he was able to talk his way out of getting turned in. Yet this family had offered him so much continued to want to help him. They told him they could help cross the border. Get him away from the Abbudin government.

And the patriarch said it just like that. With no strings attached. So Barry did something he hasn’t done in a long time – he prayed with them.