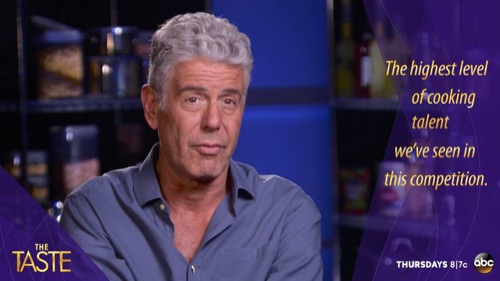 On ABC tonight The Taste returns with an all new Thursday January 22, season 3 finale episode called “The Finale,” and we have your weekly recap below. On tonight’s episode, in the season 3 finale, a winner is chosen.

On last week’s episode, the competition was getting even hotter when the remaining contestants fought to cook another day in a hot and spicy “bring the heat” themed challenge using ingredients like Szechuan pepper and pork. With solo and group challenges ahead, two more cooks were sent home, and the remaining competitors headed to the finale. Did you watch the last episode? If you missed it we have a full and detailed recap right here for you.

On tonight’s episode as per the ABC synopsis, “it’s all come down to this. The search for America’s Best Undiscovered Cook sees only five cooks remaining in “The Taste” kitchen, and the mentors give their final group challenge — creating Saints and Sinners-inspired dishes representing two very opposite ideas and culinary concepts.”

Don’t forget to join us for our live recap tonight at 8:00pm when The Taste Season 3 episode 7 returns to ABC. While you wait for the recap, let us know what you think of The Taste!

After weeks of brutal competition, five cooks are left standing on tonight’s season finale of “The Taste”. And, sadly, only one of them can be crowned the winner. So for Jennifer, Ben, Eric, Tristen, and Gabe –in this final hour – now is not the time to be making any rookie mistakes.

Tonight’s final team challenge is based on the Saints and Sinners theme. And each cook will be given a full 90 minutes in the kitchen in order to cook the two dishes representing both themes. But it is imperative both dishes come up to scratch. Particularly, as there is only five them.

Because it’s such a small group – all will be putting up their spoons for judging. So when they were told not to make such mistakes during this crucial challenge – it seems some of them should have probably have written that last part down.

Everyone was on edge and that showed in their cooking styles. Jen cut herself in the idle of cooking and had also oversalted her own pork sauce. So Ludo actually had to step in and help her create a “white trash” sauce on the fly.

He said Eric had cloying sauce, Jen’s food held a “singular” note, and Ben burnt some of his toast. Yet, by the end of that challenge, Ben had come in second with Gabe as first. Meanwhile Eric, Jen, and Tristen were all up for elimination.

However the guest judges chose to send Jen home. And not only was she a rare home cook but she also was the last woman standing. So for the rest of the competition – it was a merely a sausage fest.

The competition was down to four what with Jennifer leaving and for those that still had a hat in the fight – seeing their families again helped boost morale.

Families were at first kept at a distance in the audience but, thankfully, they were allowed to converse after Jen’s elimination. And it was good to get a rousing chat from the parents and even a nice big bear hug. It helped remind some of these cooks what exactly they’ve been cooking.

The winning prize is a cooking show and prize money. And most of the contestants that join these kind of competitions – do so in order to be a part of something they love as well as in the position to take care of their families.

So for the solo challenge, the Surf & Turf Challenge, these cooks are going to be fighting for more than just winning. With their family watching, they’re striving to be the best. And it’s the best that’s going to get extra help in the finale.

The winner of the challenge was promised a master class with Guest Judge Jonathan Waxman as well as having him on hand in the final three. And, well, the competition got a tad nasty after that last bit was revealed.

Tristen and Gabe were both part of Team Marcus but now that they’re working on a solo challenge – Tristen isn’t being as forthcoming as he usually tends to be with Gabe. Gabe needed a fillet and Tristen pretended he couldn’t hand his extra one over. Yet Gabe didn’t learn something was up until he kept trying to ask Tristen for help and was continuously outright ignored. So there goes camaraderie!

Later, the mentors had a blind tasting of each dish and they had to choose who to give the gold start to without any business.

Hence, there was two set of dishes (completely chosen on their own accord) that the judges loved the most and they belonged to Gabe and Tristen. Thankfully the artist behind these dishes weren’t revealed until after the judges had made their choice because once Marcus found out it was his team that did so well – he we was proud as a peacock.

But there was still Ben and Eric to deal with and both men had disappointed the judges with their food choices. Ben’s food wasn’t cohesive with each other and as for Eric – he had tried to do something different and yet left his plate with a “mushy” texture.

So no surprises here, Eric was sent packing and Ben was allowed to join Tristen and Gabe in the Grand Finale. You see what Eric did brought down his whole dish. Yet, what Ben did was making two great dishes that didn’t seem like they were connected to each other in any form or fashion. So of course Ben’s dishes were chosen over Eric.

Though, the judges all told Eric that regardless of his last plate they still believe he has a future in the kitchen. And they hope he doesn’t give up on it after this recent setback.

In the meantime, as far as the final three goes, they were still in the competition. And so they got to have that master class with Jonathan in which they found out what he believes to be is the perfect meal. That’s important thing for the guys to learn because the last challenge requires the cooks to prepare a three courses “perfect” meal.

And some of them ended up finding the class useful. For it turns out there still is a lot to learn and Tristen, the natural student, definitely enjoyed being back in the classroom.

Yet did any of the lessons stick? As in life, that depends on the student. And someone like Gabe who was repeatedly told to remain calm throughout the process – he got in his own way.

Each cook delivered what they thought was the perfect meal and while Ben and Tristen are nervous – Gabe is practically talking himself into a nervous breakdown because he felt he did something wrong. It seems he had wanted to add one ingredient to his main dish and had run out time to do so.

Hence, he was shaken and seeing him that way helped boost the others. They (Ben and Tristen) began to feel like they actually had a chance to take down the judges’ favorite. And so when they dishes were judged first – Ben and then Tristen probably had a moment in their minds where they said “I got this”. And then Gabe’s courses were judged.

And it looks like Gabe had underestimated himself because the judges loved his perfect meal.

So that’s when the confidence sort of fled. Neither Ben nor Tristen were as sure about their dish as they were before Gabe’s dish had bee judged. And yet when it came down to the first of the last two eliminations – no one had thought it would be Tristen that got eliminated before Ben.

Tristen was deemed one of the best cooks and still he didn’t win. But Marcus did at least see potential in him so he offered Tristen a job at his restaurant in New York. And then there was two – Ben and Gabe.

And although the judges came to love Ben’s creative flair – they just couldn’t pick him over Gabe. Thus Gabe was chosen as the winner of the third season of “The Taste”.