The Vampire Diaries Spoilers, Promo Video and Synopsis Season 6 Episode 17 – ‘A Bird In A Gilded Cage’ 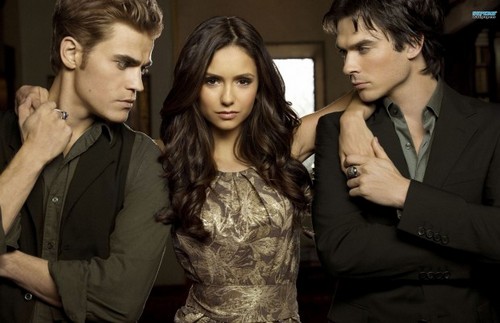 The Vampire Diaries spoilers for Season 6 Episode 17 reveal that the show will be titled ‘A Bird In A Gilded Cage’, and according to the spoilers, synopsis and promo video released for the show, we’re about to see Damon attempt to retrieve his mother from the prison world, and Bonnie give Damon a ‘shocking’ gift’. Dun dun dun.

The press release from the episode reads, “DAMON TRAVELS TO THE 1903 PRISON WORLD. Press release number 2: With the help of Bonnie (Kat Graham) and Kai (guest star Chris Wood), Damon (Ian Somerhalder) and Elena (Nina Dobrev) will set forth a plan to rescue Damon’s mother ,Lily (guest star Annie Wersching), who is trapped in the 1903 prison world.”

While those are the major plot points, we’re also going to see Caroline’s [Candice Accola] plan for Stefan [Paul Wesley] go awry, which will lead to Caroline dealing with the mess in the aftermath. In addition to that, Enzo [Michael Malarkey] and Alaric [Matt Davis] will try to bring Caroline back in, but they end up getting outnumbered and having to fight their way out of a very tough situation.

However, none of these are bigger than Bonnie’s gift to Damon, which will reportedly leave him ‘shaken’ to his very bone. What could Bonnie be giving him that would surprise him, especially after all the crazy and shocking things that have happened on The Vampire Diaries so far?

What do you guys think about the spoilers for The Vampire Diaries Season 6 Episode 17 ‘A Bird In A Gilded Cage’? Will Bonnie’s gift to Damon change the direction of the show? Will Enzo and Alaric manage to reel Caroline back in? And most importantly, will Damon and Elena manage to save Damon’s mother? With great 1903s fashion, of course!

We’ll find out next Thursday, March 19th, which is when the episode airs on the CW. Let us know your thoughts on the upcoming episode in the comments below.