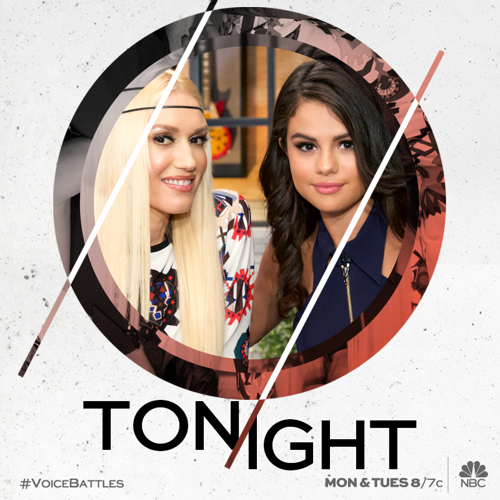 Tonight on NBC the Emmy award winning music competition The Voice continues with an all new Monday October 12, season 9 episode 7 called, “The Battles Premiere,” and we have your weekly recap below. On tonight’s episode the battle round kicks off, featuring advisers Brad Paisley, John Fogerty, Missy Elliott and Selena Gomez.

On the last episode, the best of the blind auditions were shown. Did you watch the last episode? If you missed it we have you covered with a full and detailed recap right here for you.

On tonight’s episode as per the NBC synopsis, “battle rounds” begin and the coaches enlist the help of the music industry’s top recording artists to offer their knowledge and skills as advisors. Adam Levine teams up with John Fogerty, Blake Shelton with Brad Paisley, Gwen Stefani with Selena Gomez, and Pharrell Williams with Missy Elliot. In this phase, the coaches pit two of their own team members against each other in a dueling duet. After the vocal face-off, each coach must choose which artist from their team is the strongest, and has the option of stealing losing artists from an opposing coach. Each coach has two steals during the battle rounds where their artists will proceed to the knockout rounds.”

Tonight’s season 9 episode 7 is going to be exciting. We’ll be blogging it right here for you. In the meantime hit up the comments section and tell us your thoughts on season 9 of The Voice.

#VoiceBattles starts tonight and the judges can also steal. Adam Levine has brought in legend John Fogerty (of CCR and solo fame). The first pair is Jordan Smith vs Regina Love. Jordan is the one who killed it in the auditions with Chandelier. Regina is the 51 year old radio host with the booming voice. Regina is thrilled to be working with John since he wrote Proud Mary.

Adam has them doing Sam Smith’s Like I Can. Adam says their pairing will be one of the best on the show. The judges are enraptured by their performance. The audience and judges are all on their feet by the end. Blake says it’s like they’re at the Grammy and says it’s crazy. He says Regina has control and passion and what comes out of Jordan doesn’t make sense and it’s from another planet. Pharrell says it was masterful and Regina floated. He says it was like Game of Thrones.

Gwen says it’s shocking the ability they both have. She says Jordan is unexpected and it turns her on. Adam then says they are both powerful and they complement each other. Adam says he feels dumb for putting them together but decides to go with Jordan which means Regina is up for the steal. Adam says Jordan’s voice is a unicorn. Adam starts to say nice things to Regina when Gwen interrupts by slapping her buzzer and says she deserves to be on the show because she’s amazing.

Next is Blake Shelton who has brought in Brad Paisley. First up are Tyler Dickerson and Zach Seabaugh. Tyler has a record deal before but the label went under. Zach is a high schooler who ditched sports to pursue music. Blake introduces them to Brad then tells them they’ll be singing Travis Tritt’s I’m Going to Be Somebody. Pharrell says Zach’s voice cracked just a bit but he liked hearing him sing high. He says Tyler’s experience shows. Gwen says it’s a good performance and then says Zach is a phenomenon.

Adam says he thinks Tyler’s comfort level hinders him since Zach wants this bad. Blake then has to decide. He tells Zach that the older ladies love Zach and they’re perverts. He says he’s proud of Zach. Then Blake says Tyler is an incredible talent and decides to go with Zach based on this performance. Tyler says he’s grateful to Blake and says it’s reignited his passion for music. Zach’s family is thrilled and next is Gwen’s first battle.

Gwen Stefani has brought in Selena Gomez to act as advisor. They are coaching Ellie Lawrence and Tim Atlas. Gwen has them doing Sweater Weather by The Neighbourhood. They offer advice to both that includes getting their personality out there. Gwen wants Tim to feel more comfortable. You can tell Blake is clueless about the song but is enjoying the performance. Adam says they both committed to the moment and vibed on each other.

Blake says they both have unique voices. He says he would go with Tim and so did Adam. Pharrell says Ellie is like a snake charmer and Tim was a shark. Now it’s to Gwen and she says Tim is unbelievable tonight and she loves his voice. She says she thinks Adam and Blake want to steal Ellie. Blake says Adam looks like Gandhi. Gwen chooses Ellie who is shocked. Tim is up for steal and before he can speak, Pharrell slaps his buzzer to steal him. Gwen is thrilled for him.

Next is Pharrell with Missy Elliot. His first battle is Celeste Betton vs Mark Hood. Celeste is a military mom and Mark is trying to avoid a future in farming that his mom wants. Pharrell has them singing Ain’t No Mountain High Enough by Marvin Gaye. They move Missy to tears with their rendition. They give an excellent performance and Gwen says it was the favorite battle she’s ever seen. She tells Mark he’s incredible and says there’s light coming out of him and says Celeste’s attitude is infectious.

Adam says Mark is electric like a spark plug then says Celeste’s tone is unique. Blake says they all turned for Mark but Celeste can be a star too. He asks what Pharrell will do. Pharrell says they made Missy cry then raised the bar again. Pharrell says he made a mistake putting them together because he doesn’t want to lose one of them. Pharrell decides to keep Mark. Celeste sings a couple of lines and Adam says steals are vital for him last season but decides not to steal her.

Next up is another Adam battle with Dustin Monk vs James Dupre. Dustin is a barber and James a dad of four. Adam has them doing Fortunate Son by CCR and they’re singing it for John Fogerty who wrote it. Blake says James was consistent and had good pitch but says Dustin took more risks. Pharrell says he would go with James but says they were both good. Gwen says Dustin had a bit more of a stage presence but was more captivated by James’ voice.

Adam says they took his and John’s note and did a good job. He says Dustin really went for it and says James fills the room effortlessly. Adam decides that the winner is James. He comforts Dustin and says he did a good job. Gwen says James drew her in and Adam made the right decision. Pharrell says his voice is incredible and he can do a lot with him. Next up is the last battle of the night and is Team Blake. It’s Barrett Baber and Dustin Christensen. One is a high school teacher and the other a business student.

Blake has them doing Mark Cohen’s Walking in Memphis. Blake and Brad offer some notes then the guys are ready for their battle. All four coaches are on their feet and Carson tells Blake he’s screwed. Pharrell says the way Barrett sings is incredible and says they’re both so rad but he’d go with Barrett. Gwen says Barrett is incredible and Dustin’s voice is crazy. Adam says they are both incredible and Blake is an idiot for putting them together and he’s excited one of them is available to steal.

Bake calls Adam Dr Evil. Blake says he was dumb to put them together. He says Barrett is like a vocal linebacker. Then he says Dustin approaches it differently but still destroyed it and has a special voice. Blake says it’s a draw but he has to go with someone and so he chooses Barrett. Adam slaps his button to steal Dustin and so does Gwen. Now Dustin has to choose between them. Adam says he hated that he didn’t get him the first time and hopes to get him on his team now.

He begs him not to break his heart again and says he loves him. Gwen says she worships his voice and is a fan of it and says she’s already thinking what duet they can do together. Blake says his choice is super woman or Lex Luthor. Dustin chooses Adam who goes to thank him and give him a big hug. He says his voice is beautiful and he’s happy to have him on his team. Dustin says he’s excited to still be in it. He says Dustin is finally on the right team. Tomorrow is more Voice at a new time – 9 pm. Come to CDL for live recaps.