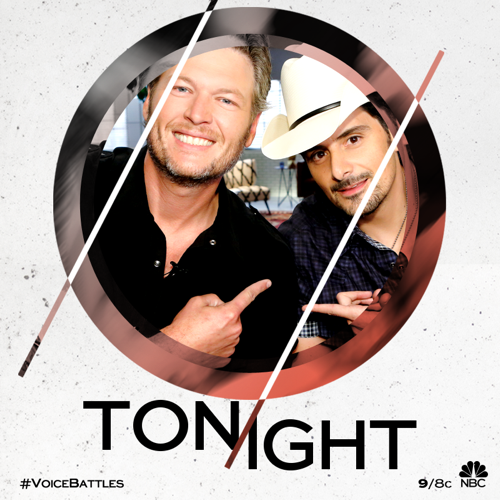 Tonight on NBC the Emmy award winning music competition The Voice continues with an all new Tuesday October 13, season 9 episode 8 called, “The Battles Premiere, Part 2” and we have your weekly recap below. On tonight’s episode the battle round continue with advisers Brad Paisley, John Fogerty, Missy Elliott and Selena Gomez.

On the last episode, the first part of the battles premiered. Did you watch the last episode? If you missed it we have you covered with a full and detailed recap right here for you.

On tonight’s episode as per the NBC synopsis, “the “battle rounds” continue and the coaches enlist the help of the music industry’s top recording artists to offer their knowledge and skills as advisers. Adam Levine teams up with John Fogerty, Blake Shelton with Brad Paisley, Gwen Stefani with Selena Gomez and Pharrell Williams with Missy Elliot. In this phase, the coaches pit two of their own team members against each other in a dueling duet. After the vocal face-off, each coach must choose which artist from their team is the strongest, and has the option of stealing losing artists from an opposing coach. Each coach has two steals during the battle rounds where their artists will proceed to the knockout rounds.”

Tonight’s season 9 episode 8 is going to be exciting. We’ll be blogging it right here for you. In the meantime hit up the comments section and tell us your thoughts on season 9 of The Voice.

#VoiceBattles starts with Adam Levine and John Fogerty getting ready for a pairing. It’s Keith Semple versus Manny Cabo. Keith is the Irish rocker and Manny is the fashion photographer. Adam has them doing The Who’s Teenage Wasteland. Cool. The Who is not something you hear on this show a lot. Adam jokes around and tells Keith to sing it super-Irish and he does for a minute. It’s hilarious. Now they battle. Blake says they’re so good and asks how they know he was wasted.

Then he says that Adam tried to steal Manny’s look and says it was one of the best battles ever. Pharrell says Keith’s notes were incredible. Pharrell says he exceeded his expectations and could make an album right now then says Manny’s voice is stratospheric. Gwen says that was so good. She says Manny knows what he’s doing and it’s so natural and says Keith took her breath away like he came out of a cage. Adam says this was polished. He decides the winner is Keith. No one steals Manny – that’s a shock.

Next up is a Team Blake battle and he and Brad Paisley are working with Chris Crump versus Krista Hughes. Chris is a newlywed who got a four chair turn and Krista is a small time girl with big dreams. Blake has them singing When I Get Where I’m Going by Brad Paisley and Dolly Parton. Brad gives them the backstory on the song about how he had lost a dear aunt to cancer. Now they do battle. IT was good but nothing stunning.

Pharrell says Chris showed a big chest voice that was strong and says it was great then says Krista hit a couple of flat notes in the bridge. Gwen says she can’t believe Chris’s voice and says it’s soothing and control and Krista gave her goosebumps. Adam says Krista lost control and then Chris made a face but they are two of the best singers. Blake says Chris did a good job of making the country song fit him. He says Krista struggled with the bridge but made it work. He goes with Chris.

The next battle is Team Pharrell with Missy Elliot. This one is Ivonne Acero versus Siahna Im. This is Ivonne’s second try at The Voice but last year she got no chairs and this time she got two. Siahna is a young girl with a huge voice and says she’s weird. Pharrell has them singing Keep Me Hanging On by The Supremes. They get some notes and then it’s time to do battle in a teenager vs teenager Motown showdown. They sing and it’s pretty good but a strange arrangement with unusual timing.

Gwen says Siahna is incredible at 15 with attitude and her little tiny body. She says they were both good and says she doesn’t know who she’d pick. Adam says Siahna looks like she was invented by Pixar. He says there were issues on both sides but there’s tons of potential for both of them. Blake says Siahna is only going to get better and she’s awesome and says Ivonne is great. Adam says it’s a cute overload and tells Pharrell it’s tough.

Pharrell says they performed with a lot of feeling. He says Ivonne did well but her nerves got to her a bit. He says Siahna worked on what he asked her to. Pharrell goes with Siahna. She cries and says she wanted to do her best. Ivonne is up for steal and Gwen takes her. Pharrell is thrilled then Blake slaps his button too. Gwen tells Blake he’s dumb because she’s supposed to be on her team. Blake calls Gwen a freak. Gwen says she can’t be on Blake’s team and is supposed to be on her team.

Adam goes up and points to Gwen and says angel then points to Blake and says devil. Gwen says she will plug into her and share all her success with her and Blake can’t do that. Blake says stop that crying and says they have lots in common. He says they were both on the show last year and now this year. He says he plants cantaloupes at his farm. Blake says he knows a lot about music. Adam reminds her that Blake didn’t turn for her and Blake says he’s Howie Mandel and isn’t even on this show.

Ivonne chooses Blake. Gwen is shocked that Blake stole Ivonne out from under her. Ivonne says Gwen is amazing but she’s always wanted to work with Blake. Gwen says she’s furious and it makes no sense that she went with Blake. He says he’s glad to have her and says he mopped the floor with Gwen. He tells Gwen not to cry and she says that’s not okay with her.