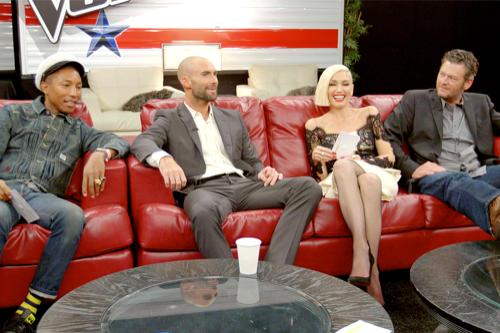 Tonight on NBC the Emmy award winning music competition The Voice continues with an all new Monday October 19, season 9 episode 9 called, “The Battles Part 3,” and we have your weekly recap below. On tonight’s episode the battles continue, the coaches enlist fellow musicians Brad Paisley, John Fogerty, Missy Elliot and Selena Gomez to prepare their artists.

The Voice is about singers that square off for a coveted recording contract in this reality talent contest from the producers of “Big Brother” and “Survivor.” Four vocal coaches mentor the contestants in three distinct competition phases: the blind auditions (during which the coaches can’t see a contestant and thereby judge them solely on their vocal talent); the battle phase (in which the contestants are advised and developed); and, lastly, the live-performance phase.

On tonight’s episode as per the NBC synopsis, “The “battle rounds” continue and the coaches enlist the help of the music industry’s top recording artists to offer their knowledge and skills as advisers. Adam Levine teams up with John Fogerty, Blake Shelton with Brad Paisley, Gwen Stefani with Selena Gomez and Pharrell Williams with Missy Elliot. In this phase, the coaches pit two of their own team members against each other in a dueling duet. After the vocal face-off, each coach must choose which artist from their team is the strongest, and has the option of stealing losing artists from an opposing coach. Each coach has two steals during the battle rounds where their artists will proceed to the knockout rounds.”

Tonight’s season 9 episode 9 is going to be exciting. We’ll be blogging it right here for you. In the meantime hit up the comments section and tell us your thoughts on season 9 of The Voice.

The #VoiceBattles start with a Team Blake challenge of Blaine Mitchell vs Blind Joe. Blaine was a pro athlete hopeful whose sports dreams died with an injury. Blind Joe was a preemie who never developed sight from birth. Brad Paisley and Blake are working with Blaine and Blind Joe on the song Old Time Rock and Roll by Bob Seger. It’s battle night after some intense rehearsal and notes from the coaches.

They sing the classic rock song and their voices are nice, but admittedly, they are neither one the amazing Bob Seger with that legendary scratchy voice. Pharrell says it was exhilarating then says Blaine hit a great high note an octave up. Gwen says Blaine did a great job working the stage then says her son has a shirt like his and loves cowboy shirts. Gwen tells his family they should be very proud of him.

Adam says he wanted to be drunk at a bar hearing this. He says it was awesome and loves Blind Joe and says Blaine is a rock and roll star. Now it’s down to Blake who says he’d like to borrow Joe’s cane to beat Adam. Blake says it was a lot of fun and thanks them. He says it was a dead tie on the singing so he says it’s tough. He chooses Blind Joe as the winner. Adam pauses a moment then slaps the steal button.

Adam says he wants to figure out what they dude has and says he has a vibe that he wants to be a part of and goes to hug him. Blaine is thrilled to be headed for knock outs with Team Adam. Next up is a Team Adam battle with Cassandra Robertson vs Viktor Karaly. Cassandra is a mom who put her music dreams on hold when she got pregnant in college. Viktor is a Hungarian superstar.

Adam and John Fogerty have them singing Babyface’s Nobody Knows It But Me. They get their notes and a final rehearsal then it’s battle time. Their voice are incredible together. Blake says it was like he was listening to a record and says it’s the best battle he’s seen. He talks about a run that Cassandra did then says that Viktor stayed equal with her and says he would go with Viktor because he shocked him.

Adam says neither could have done better then decides to go with Viktor who nicely says Cassandra is amazing. Cassandra thanks Adam but she does not get picked up for a steal.

Next is a Team Gwen battle with guest coach Selena Gomez. It’s Chase Kerby vs Korin Bukowski. Chase works at his mom’s candy store but wants to sing. Korin is an oddball whose unique voice drew Gwen in during the blind auditions. Gwen and Selena have them singing Sampson by Regina Specter. They get their notes and then it’s battle time.

The crowd digs it and Adam says it’s a risk to sing that song and says Chase has a great voice and he loves his falsetto but the transition was rough. Adam says Korin sailed through it and had perfect pitch. He says he thinks Korin won it. Blake says he was mesmerized and says the transitions moved him that Chase had. Pharrell says the song was not in Chase’s wheelhouse so Korin would win it for him.

Pharrell says Chase’s voice is great. Gwen says them criticizing them pisses her off because she’s mama bear about them. Pharrell hides behind his chair as does Adam. Gwen says it was so emotional and she died for that performance. She says Adam is so wrong about what he said. Adam pouts. Gwen decides to go with Korin. Chase thanks Gwen for the chance she gave him.

Next is Team Pharrell with Missy Elliot. It’s Evan McKeel vs Riley Biederer. Evan started singing at church and works with dementia patients. Riley is a former gymnast who decided to give up sports for music and is a YouTube sensation. They give them Stevie Wonder’s Higher Ground. They get their notes from Missy and Pharrell then prepare for their battle.

Evan and Riley do justice to the classic. Gwen says Evan’s voice in his body is incredible and says his presence is magic. She says Riley has a rich voice and it’s beautiful. Adam says Stevie Wonder had a high voice and Evan pulled it off unbelievably well, so well it pissed him off. Adam says he thinks Evan won it. Blake says Evan destroyed it but says Riley has a voice he would recognize as more unique.

Pharrell says Riley did an amazing job and says Evan has like a matrix in his head when he sings and has stratospheric range. Pharrell decides to go with Evan. Pharrell says he did something people haven’t seen before that’s left of center. Riley thanks Pharrell for the opportunity to work with her. Gwen then sits on her steal button and takes Riley. Evan cheers for her. Gwen says she likes her voice and presence.

Next up is a Team Gwen pairing of Braiden Sunshine vs Lyndsey Elm. Braiden is 15 and has been in a band since he was 9. Lyndsey had a four chair turn in the blinds. Gwen and Selena have them sing Noone Is to Blame by Howard Jones (OMG – love this 80s song!!). They get their final notes then it’s battle time. Their voices are gorgeous together and they really do this classic justice.

Adam says it was like a tennis match. He says they each had a moment that showed him how much more they have and says Gwen can’t go wrong with either. Blake calls him Powder (HA!). Blake says Lindsey had it won until Braiden pulled out the last night and says they’ve seen the tip of the iceberg with both of them. He says this will break Gwen’s heart and tells her to flip a coin.

Pharrell says they are both interesting performers and Braiden showed there is so much more and says he likes his tone. He says then Lindsey colored the song beautifully and she can do more – he calls her voice seductive. He tells Gwen it’s tough. Gwen says Lindsey’s star came out tonight and she had tone, control and presence.

Then she tells Braiden that he’s so cool and so young. She says his high notes are mind blowing. She says she’s very confused. Gwen decides to go with her heart and says it’s Braiden. He’s shocked that he won and is moving on. Lindsey thanks Gwen for showing her confidence. Gwen goes to hug her. She says she feels bad and starts crying.

Gwen has used her last steal as has Adam. Pharrell and Blake each have one left. Next up is Team Adam’s final pairing of the night. It’s Andi and Alex vs Chance Pena. The identical twins have been singing together since high school and got a four chair turn for their harmony. Chance is only got a turn from Adam who tells the others they screwed up and they admit it.

Adam and John Fogerty chose Wherever You Will Go by The Calling. They get their notes, rehearse then prepare to do battle. The three harmonize together amazingly well but there’s a too loud percussion sound that distracts. It’s pretty amazing. The judges are amazed. The crowd goes wild. The judges are on their feet. Blake says it was magical and says sibling harmony is like nothing else.

He tells the girls it’s bullcrap they didn’t pick him at the Blinds. Blake says he didn’t think Chance could compare but then he thinks he won it. Pharrell says Andi and Alex are like two unicorns then says Chance was unbelievable and his voice led because it was the odd man out and says he has incredible control. Gwen says OMG. She says they are magic and the girls are candy in her ears.

Gwen says if she was 15 she would have Chance’s poster in her locker and would lose her mind over him. She says he needs to stay on the show. Now it’s down to Adam who says they were all so good. Chance says it’s tough to go against the girls since they are in sync. He says he thinks they should form a group together. He says this is brutal then decides to go with Andi and Alex.

They will move on to the Knock Outs and Adam says they are ethereal and that’s why he chose them. Then Chance thanks Adam for believing in him then Blake hits the steal buzzer. The girls cheer for him. Blake says he has something magical in his voice and he missed it in the blinds and deserves to be in the show. He says he’ll get him some socks and take him to the finale.