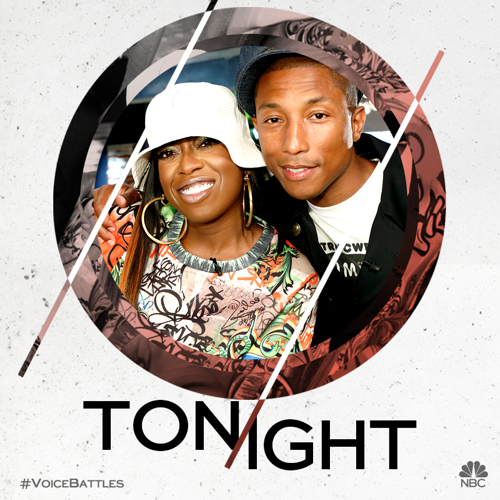 Tonight on NBC the Emmy award winning music competition The Voice continues with an all new Tuesday October 20, season 9 episode 10 called, “The Battles Part 4,” and we have your weekly recap below. On tonight’s episode the battles continue with part 4.

On the last episode, the “battle rounds” continued and the coaches enlisted the help of the music industry’s top recording artists to offer their knowledge and skills as advisers. Adam Levine teamed up with John Fogerty, Blake Shelton with Brad Paisley, Gwen Stefani with Selena Gomez and Pharrell Williams with Missy Elliot. Did you watch the last episode? If you missed it we have you covered with a full and detailed recap right here for you.

On tonight’s episode as per the NBC synopsis, “the battle round continues. The advisers are Brad Paisley, John Fogerty, Missy Elliott and Selena Gomez.”

Tonight’s season 9 episode 10 is going to be exciting. We’ll be blogging it right here for you. In the meantime hit up the comments section and tell us your thoughts on season 9 of The Voice.

It’s the final night of the #VoiceBattles. Gwen say the battles are emotional and she hates when people go home. Adam says his team is the best. Blake calls him cocky. Team Adam has the first battles and it’s two teens Amanda Ayala vs Shelby Brown. Amanda is a rocker who just graduated high school and Shelby is a powerhouse country crooner who sings at the local bowling alley.

Adam and John Fogerty have them singing Steve Nicks Edge of Seventeen. They get their final notes, do the final rehearsal with the band and then it’s time for the battle. The girls start out together and they have very similar and strong voices. They definitely did Stevie justice. Blake says Adam is trying out for the Blue Man Group with his bald head then tells Amanda he likes her rasp.

Blake says he can’t believe they’re both just 17. He says Shelby has a bigger, louder voice and has almost no vibrato which is impressive. He says it’s a matter of taste. Pharrell says it’s impressive that they can both belt like that. He says Amanda has crazy control but Shelby has huge notes and doesn’t know what Adam should do. Gwen says Shelby fills the room and says they’re both incredible.

Now it’s down to Adam who says it’s about confidence and says Shelby sassed it up. Then he says Amanda is a pro. He decides to keep Shelby. She’ll move on. Adam goes to hug her and he says they’re evenly matched but Shelby rose to the occasion. Amanda thanks Adam and he says she deserves to be there.

Next up is Team Pharrell and he’s got Missy Elliot with him. It’s Amy Vachal vs Jubal and Amanda, the duo. Amy is a struggling waitress in New York and Jubal and Amanda got engaged on stage at their blind audition. They have them doing To Love Somebody by The Bee Gees. They get notes from Missy and Pharrell and then a final rehearsal before the battle.

Amy’s voice is so different from theirs that it’s almost like a one vs one vs one battle. It’s different. Gwen says it was beautiful and loved the three harmony ending. She says Jubal and Amanda have strong voices but Amy’s is delicate and airy and she looks like Pocahontas. Gwen says she thinks Amy is a star. Adam says it seemed like Amy was a third wheel on a date and so it was awkward.

Adam says she shined despite that. Blake says Jubal and Amanda were better today than their blind and says Amy was the most hurtful rejection in the blinds for not picking him. Blake jokes that if his had been the only chair that turned, she still would have rejected him. He says Amy is the win. Pharrel tells the duo they are an amazing unit and Amy has a delicate way.

Pharrell says Amy is amazing. He decides to keep Amy. Then he hugs her and Amy says Pharrell is inspiring and pushes her to go in way she never imagined. We see a team update showing that Adam’s Team is done and Pharrell has a steal left. Team Blake is next and he and Brad Paisley have a cocktail before they coach the last battle of the night. It’s Emily Ann Roberts vs Morgan Frazier.

Emily does classic country and Morgan is the intrepid self-starter who sold her CDs door to door. The guys have them singing Patty Loveless’ I’m That Kind of Girl. Blake and Brad give them notes on how to change up their approaches to the sing then they have the final rehearsal with the band. They both seem to do justice to the country staple.

Pharrell asks how they felt and they tell him they had fun. Pharrell says he doesn’t know what to tell Blake. Gwen says she saw potential and says their voices knocked her over. Adam says he enjoyed the performance and says Blake is a ding dong for pairing them and says it’s an impossible decision and he wants to offer Blake no help.

Blake says Emily is like a little girl in rehearsal but came out of her shell on stage. He says Morgan’s end not was like Carrie Underwood. Blake says he’s throwing up inside his mouth over this. Blake then decides to go with Emily Ann. Pharrell uses that last steal to nab Morgan and Emily Ann is cheering for her offstage. Pharrell says he’s never had a country person on his team before so he’s excited.

Next week the knock out rounds start with guest coach Rihanna and the singers get to choose their own songs. We’ll see the following.