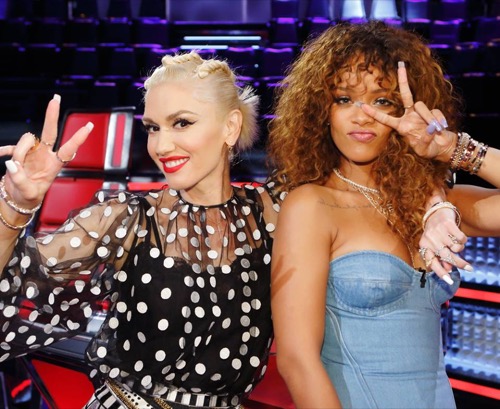 Tonight on NBC the Emmy award winning music competition The Voice continues with an all new Tuesday October 27, season 9 episode 12 called, “The Knockouts, Part 2,” and we have your weekly recap below. On tonight’s episode the knockouts continue.

On the last episode, the “knockout rounds” began with coaches Adam Levine, Blake Shelton, Gwen Stefani and Pharrell Williams’ strongest team members remaining from the battle rounds. Did you watch the last episode? If you missed it we have you covered with a full and detailed recap right here for you.

On tonight’s episode as per the NBC synopsis, “the “knockout rounds” continue with coaches Adam Levine, Blake Shelton, Gwen Stefani and Pharrell Williams’ strongest team members remaining from the battle rounds. The artists will be paired against a teammate once more, but this time they will each select their own song to perform individually, while their direct competitor watches and waits. Music phenomenon and Grammy Award-winning artist Rihanna will serve as a key adviser and be on hand to work with all of the coaches and their teams as they prepare the artists for this challenge. The coaches alone will choose the winner from their team to move on to the live shows and the artist not selected will be available to be stolen by another coach.”

Tonight’s season 9 episode 12 is going to be exciting. We’ll be blogging it right here for you. In the meantime hit up the comments section and tell us your thoughts on season 9 of The Voice.

#VoiceKnockouts is on with #RihannaOnTheVoice back as coach. First is Team Gwen and she’s got Korin Bukowski and Summer Schapell. Weird Korin makes Rihanna laugh. Korin has chosen All I Want by Kodaline. Her voice resonates beautifully and she hits an amazing upper register note. Summer sings Little White Church by Little Big Town and she kills it. Adam says he would take Summer to a little white church and says it was so good and animated. He says Korin’s performance was great and inside.

Gwen says she feels sick over this decision. Gwen decides to keep Korin. That puts Summer up for a steal. Gwen says Korin’s both can be soft and angelic and very strong too. Summer thanks Gwen for taking a chance on a country girl. Next up is a Team Adam pair of Dustin Christensen and Keith Semple. Adam tells Dustin that Blake was stupid for letting him go. Dustin chose Free by Zac Brown Band. The tremor in his voice is incredible.

Keith does I Want to Know What Love Is by Foreigner. He hits some amazing high notes and has the crowd on their feet. Blake tells him they are both great singers. He says Dustin has a warm voice and then Pharrell tells Dustin he’s a natural talent and works the room. He says Keith ended it beautifully. He says one is a stylist and one is a fighter. Gwen says Dustin’s voice is soothing and he doesn’t over sing. She tells Keith she loves his vibe and energy and says it was a good performance.

Now it’s down to Adam and he says Dustin is an amazing singer. He says Keith extended the notes like he asked him to. He says they both showed growth in different ways. Adam says he’s not sure who to pick and says it’s not easy. He finally goes with Keith. Pharrell seems surprised. Keith is thrilled when he goes to hug his kids. Dustin thanks Adam for everything and Adam says he hates to see him go home but Keith did a really tough song.

Next up is a Team Pharrell challenge. He paired Darius Scott and Morgan Frazier and says since they’re both powerhouse vocalists, it wouldn’t be fair to put them up against anyone else. Pharrell says Darius sis fearless the way he does runs. Morgan was the one who lost her Nashville career as a teen. Pharrell tells her to concentrate less on perfection and says to connect more. Darius goes first and he does George Benson’s Broadway. He kills it with some spectacular runs that has the judges and crowd up.

Morgan does Even If it Breaks Your Heart by Eli Young Band and she also wails like crazy. Blake is digging her vocal in particular. Again, the judges and crowd are on their feet. Gwen says she’s in a daze and asks Darius how he does that and says he’s odd and amazing and calls him magic and says she’s going to stalk him. Then she tells Gwen her tone is unbelievable. Adam says Darius is the most ridiculous vocal mechanic he’s ever heard. He says then Morgan blew his mind and says they are both great.

Adam says Pharrell should be careful since Blake has a steal left. Blake says Darius uses his vibrato to change notes and it’s crazy. He says Morgan encompassed the sentiment and blew them away and he would pick her right now. Pharrell has to choose and says Darius’ voice is like a sax going up and down the keys and Blake calls him saxxy. Pharrell then tells Morgan she did what he asked and worked so hard for this. He says she showed she doesn’t want to go home.

Pharrell says both are phenomenal but he decides to keep Darius. He says he chose Darius for his note intuition. Darius is thrilled. Morgan thanks Pharrell for this opportunity then Blake waits for the last minute to steal Morgan and she’s back on his team again. He tells her the last time he got a steal back, it was Craig Wayne Boyd and he won it.