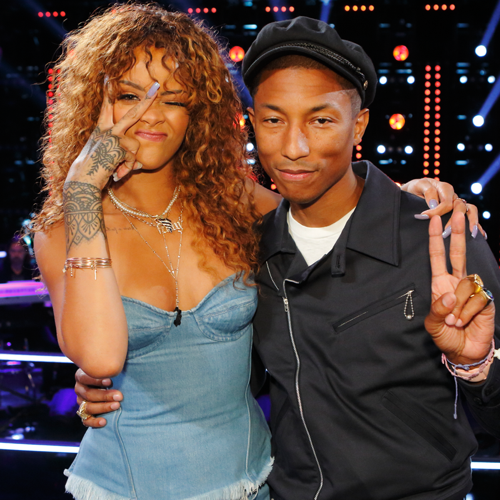 Tonight on NBC the Emmy award winning music competition The Voice continues with an all new Monday October 26, season 9 episode 11 called, “The Knockouts Premiere,” and we have your weekly recap below. On tonight’s episode the knockouts begin.

On tonight’s episode as per the NBC synopsis, “the “knockout rounds” begin with coaches Adam Levine, Blake Shelton, Gwen Stefani and Pharrell Williams’ strongest team members remaining from the battle rounds. The artists will be paired against a teammate once more, but this time they will each select their own song to perform individually, while their direct competitor watches and waits. Music phenomenon and Grammy Award-winning artist Rihanna will serve as a key adviser and be on hand to work with all of the coaches and their teams as they prepare the artists for this challenge. The coaches alone will choose the winner from their team to move on to the live shows and the artist not selected will be available to be stolen by another coach.”

Tonight’s season 9 episode 11 is going to be exciting. We’ll be blogging it right here for you. In the meantime hit up the comments section and tell us your thoughts on season 9 of The Voice.

#VoiceKnockouts features #RihannaOnVoice as a guest mentor. First up is Team Adam with Andi and Alex and they are doing Keith Urban’s Stupid Boy. Rihanna says they sound incredible but they need to be individually bold. We next see a replay of Adam’s steal of Blaine Mitchell and then Blaine says he’s chosen James Bay’s Hold Back the River. Blaine goes first and he rocks the place out. He has a huge finishing note that has all the judges on their feet and the crowd too. Next is the twins and as usual, their voices are ethereal. Their harmony is otherworldly. The judges are on their feet again.

Blake tells Blaine he screwed up letting him off his team. Blake says the girls are a surprise and says Adam will have a tough choice. He says Blaine chose a more dynamic song. Pharrell says their song choice wasn’t what it could have been then says Blaine showed them there’s more to him than they saw. Gwen says the twins are incredible then says Blaine has a rare thing – she says he was into the emotion of the song. Now it’s down to Adam. He tells the twins they did a fantastic job. He tells Blaine he stole him on a whim and says his power is amazing. Adam says the winner is Blaine.

Blaine is thrilled that Adam chose him and the twins are now available to steal. No one takes them but they were amazing. Next up is Team Gwen with Braiden Sunshine and Ellie Lawrence. Braiden has chosen Michael Buble’s Feeling Good. Rihanna says he’s this nerdy kid but the voice that comes out is scary. Rihanna gives him some notes. Ellie has chosen Demi Lovato’s Cool for the Summer. Rihanna says she’s flat and needs to stay in the pocket. OMG Braiden put in contacts and flat ironed his hair. He looks like a totally different person. He’s perfection. The judges are on their feet by the end.

Next is Ellie who has the crowd grooving. She does a really cool growl thing. Adam compliments Braiden’s costume change and Blake says it’s like a Harry Potter audition. Adam says Ellie blasted out like she was coming out of a cannon. But he says he thinks Braiden won it. Blake says he’s seeing amazing growth with Braiden. Pharrell says the way he handled that song was amazing. He says Ellie really went for it. Gwen says Ellie doesn’t have as much control but has a great personality. Then she says Braiden’s skills at song choice was amazing. Gwen chooses Braiden.

Next up is a Team Blake pairing of Blind Joe and Barrett Barber. Barrett has chosen Colder Weather by Zach Brown Band. Rihanna advises him to work on his softer notes. Blind Joe is doing Waylon and Willie’s Mammas Don’t Let Your Babies Grow up to be Cowboys. Rihanna says he ripped her heart out and she can’t even talk to it. She’s almost in tears and says he’s sexy. Blake says he has heart in it and says to sing the best he can. He says Blind Joe likes to throw out ad libs and he just wants him to focus on his performance.

Barrett performs first and he’s electrifying. He ends on a soft note he sings to his wife. Blind Joe kills the crowd and even Barrett is on his feet clapping for him. Pharrell tells Blind Joe that he took that song to different heights and says they all felt it. Then he tells Barrett that he’s supernatural in how he performs. He says this is tough for Blake. Gwen says Blind Joe has a powerful voice but Barrett is clear on who he is and he’s a true artist. Adam says Barrett is like an established country artist and says good job. Adam says he could feel Blind Joe’s nerves but he was amazing and he’s a fan.

Blake says he didn’t see nerves from Blind Joe until today and says singing against Barrett could give him nerves. Barrett says Blind Joe makes him nervous too. Blake says they want him to be a better man. (Isn’t that a rom-com movie line?) Blake says he has to go with who sang the best now. He goes with Barrett. That makes Blind Joe available for steal. Joe thanks Blake for all the advice. Blake says Barrett is a little more polished and can conquer any musical genre.

Next up is a Team Pharrell pairing of Amy Vachal and Madi Davis. Madi has chosen Case of You by Joni Mitchell. Pharrell says the song choice shows what an artist she is. Rihanna says it was like Adele. Amy chose Etta James A Sunday Kind of Love. Pharrell tells her to give some more depth using her chest voice to make it more intense. Rihanna says the guitar has to go and she needs more attitude. Amy sings first and her voice is strong and jazzy. The crowd loves her. The judges are on their feet for her.

Madi’s voice is pure magic. She finishes with a lilting run that has the crowd cheering. Gwen says she could listen to both of them all day long. She tells Madi that Joni would have been proud and she was mesmerized and she says she likes Amy singing without the guitar. Adam says he’s a huge fan of Madi’s and says her growth is staggering. He says he regrets not being able to turn for Amy and says she blows them all away.

Blake says Amy blows him away with the notes she thinks to sing. Then he says Madi snuck on him and was so good. He says he wants to take a bubble bath and listen. Adam says the visual is disturbing. Pharrell says Madi’s spirit is magical and Amy is such an interesting artist. He says it’s a difficult decision. Pharrell says he feels like they both win but has to go with Madi. Amy is up for steal and Adam warms up his stealing hand. Adam hits his buzzer as soon as Carson says she’s available.

Adam starts to talk then Blake slaps his buzzer too. Pharrell stand and does the Karate Kid stance. It’s now a fight. Blake says he did hit his button for her and begged her to choose him. He says she’s one of the best auditions and he’s won The Voice twice as many times as Adam and says he can’t believe she’s available and she can’t go with Sinead O’Connor. He asks Adam to do a Dr Evil impression. Adam woos her as well and Amy chooses Adam. Blake says he’s paralyzed.

Chance performs first and his voice is big and emotional. The crowd loves him. Ivonne is next and she is strong and does a great rendition of Katy Perry’s song. The crowd is on their feet and the judges are cheering her too. Pharrell says Ivonne gets better and better as does her confidence. He tells Chance it’s crazy that he’s 15 and had a great performance. Gwen tells Chance she loves the little yodel and says Ivonne touched her and she wanted to sing harmonies with her.

Adam says Chance sang a little too low but says he’s a great guy and he loves him. Then he says Ivonne has shown so much growth and she’s blossoming and incredible. Blake now has to decide. He says these are the two best steals of the show. He says they were both good and says Chance’s song choice was a challenge. Blake goes with Ivonne. She’s thrilled. Blake hugs her and says she’s going live. Chance thanks Blake for giving him a second chance.

Last is Team Adam’s Jordan Smith and Viktor Karaly. Jordan has chosen Set Fire to the Rain by Adele. Rihanna says she’s too scared to sing Adele. She tells him that his voice is beautiful and says she’s a fan. Adam gives him a couple of notes. Viktor has chosen Alicia Keys’ If I Ain’t Got You. Adam says he’s covered it and it’s a tough song. Adam tells him to stay in the pocket and Rihanna gives him some notes too. Viktor says he’s overthinking.

Jordan goes first and he kills the Adele song. He does a crazy strong high note towards the end that’s stunning. Pharrell is stunned – he can’t even believe it. Everyone is on their feet including all four judges. Viktor then sings his number. He builds slowly then really kicks it into high gear. His falsetto is insane. Blake says everything was so good. He says wasn’t expecting Viktor to do that and knock it out of the building. He says the only problem is that he’s against Jordan.

He tells Jordan it’s one of the greatest vocals he’s heard. Pharrell says Viktor went to the next level and says both of them could make it to the end. Gwen says Viktor is amazing and the high notes were incredible then says Jordan is a freak of nature and says she doesn’t know how he did that with the song and says he’s mind-blowing. Adam says Viktor was struggling in rehearsal and then fixed it all. He says Jordan is the unicorn because it’s profound to hear him sing and he gives him goosebumps.

Adam says no one has ever affected him like that. Adam says Viktor made this hard on him but he decides to go with Jordan. That puts Viktor up for a steal. Adam says Jordan commands your attention and sweeps you away. Gwen slaps her steal button for Viktor. Adam is happy he got picked up. Jordan is excited for him too. Gwen says his gift is amazing. Gwen now has Viktor who is happy to go to the live playoffs. That’s it for the knock outs!