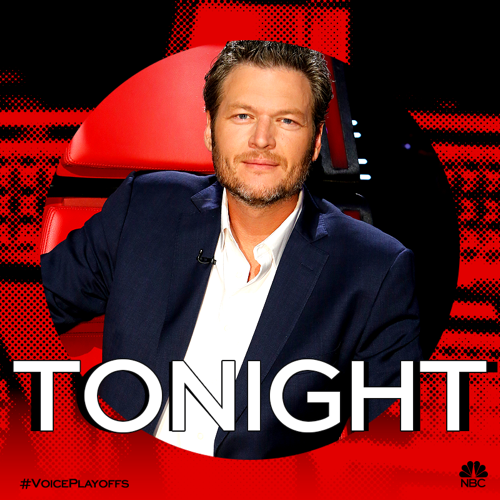 On the last episode, the first part of the live playoffs premiered. Did you watch the last episode? If you missed it we have you covered with a full and detailed recap right here for you.

On tonight’s episode as per the NBC synopsis, “the remaining artists perform in front of coaches Adam Levine, Blake Shelton, Gwen Stefani and Pharrell Williams for their chance at a spot in the live performance shows.”

Tonight’s season 9 episode 16 is going to be exciting. We’ll be blogging it right here for you. In the meantime hit up the comments section and tell us your thoughts on season 9 of The Voice.

#TheVoiceLive tonight features artists from Team Pharrell and Team Blake including their comeback artists. Blake says he’s so excited about the comeback and says he used that info to set up a pairing in his battle rounds. Team Pharrell’s artist Darius Scott is up first and he’s doing Kanye’s Love Locked Down. Darius preps then takes the stage to do his own creative arrangement of West’s song. Gwen says music lives in him. Adam says the way he moves through vocals is crazy. Blake admits he doesn’t know the song but says he loved it. Blake says Darius is the one to be worried about. Pharrell says it was great.

Next up is Ivonne Acero whom Blake stole from Pharrell and is she’s not on Team Blake and tonight she’s doing One of Us by Joan Osborne (cool song). She outsings the original artist so that’s pretty impressive. Blake is clapping for her while she’s still singing and then he’s on his feet for her as is the crowd. Pharrell says it blows his mind to watch her with those big notes and her shy personality. Gwen says her confidence was impressive and says it was beautiful. Adam says her voice is amazing then she has another gear that comes after a slow build. He says Blake has done great work with her.

Then he adds that he still can’t stand Blake. During all their comments, Blake interrupts and yells out – I love you Ivonne. Blake says she’s what makes this show cool. He says she’s not a shy performer anymore even though she’s a shy person and says she blows his mind. He says it was amazing. The next artist is from Team Blake also – Morgan Frazier. She was an artist that Pharrell stole then Blake was able to steal her back. She’s doing Lips of an Angel by Hinder that country artist Jack Ingram prior covered. Her voice is great but her stage presence was kind of meh – like her hand were just random.

Blake is already yelling for her. Pharrell congratulates her and says she has come far and says this is her time. Gwen says she loves her voice. She says it was beautiful and an incredible job. Blake says she’s like a country standard already and says she commands attention. Blake says people are haters if they don’t vote her through to the next round. Evan McKeel and Madi Davis are next along with Pharrell’s comeback artist. They also show a special message from The Hunger Games stars and some footage from behind the scenes plus a special trailer.

Team Pharrell’s Evan McKeel is doing Stevie Wonder’s Overjoyed – that’s the song that Pharrell asked him to sing off the cuff at the blinds and that he killed. His voice is absolutely amazing – totally did Stevie justice. Pharrell is on his feet when he’s done and the crowd is cheering. Gwen says that song is hard and says he sang it perfectly. She says once in a while he seems too theatrical but says it was crazy good. Blake says he navigated the melody perfectly and says he’s a great singer. Pharrell says he loved it and says it was super genuine.

Sawyer Fredericks is there talking to Carson. Team Pharrell’s Madi Davis is next and she’s doing Songbird by Fleetwood Mac. That’s an iconic song and she killed it with an indie vibe. Pharrell is on his feet and the audience is going nuts. Adam says she has a great vision for what she wants and says great job. Blake says the transition to her falsetto was incredible and calls it a breakout moment. Pharrell says she’s talented beyond her 16 years and says vote her through. She’s crying tears of joy. They are all so good – this is a tough year because of all the talent.

Next is Pharell’s comeback artist. He says after the Mark and Celeste battle, he knew he had to have her back. He says he hoped something would change to get her back in this and then it did. Celeste Betton is doing Carrie Underwood’s Something in the Water. She says she’s a different person coming back. The country song is a surprising choice and she does not disappoint. Pharrell is on his feet cheering for her. The crowd goes wild and the cheering doesn’t die down for a while. Gwen says she’s literally crying and says she picked the perfect song and it was just her.

She says it was amazing. Pharrell says it was all they could have asked for and says she sang like the people don’t want her to go home. He says she tapped into the strongest part of the universe and brought it into the room. He says he’s sure everyone at home will vote for her.

Next is Team Blake’s Zach Seabaugh who is doing Steve Holy’s Brand New Girlfriend. His voice is so deep for such a young guy. The ladies are loving it. His showmanship kills. He does not look or sing like a kid. Blake is on his feet and the crowd is cheering and whistling for him. Carson teases him about gyrating with his mother in the room. Adam says the girls need to calm down then says that was one of his favorites because he did all of this dangerous stuff really well. He says he’s one of the few that could pull off the gyrations and performance tricks he did.

Blake says he would like to stop the Superman talk and start the Elvis talk from here on out. He says in rehearsal he was wondering what he was going to do and says then he came out and did that. Blake says he just bought a ticket to the lives and says he did a great job. The next artist is Team Pharrell’s Riley Biederer that Pharrell was able to steal back. She’s doing It Should have Been Us by Tori Kelly. She slays with her big high notes and engaging stage presence. Pharrell is back on his feet cheering. The crowd loves her too. Carson says her parents were dancing.

Gwen was her former coach and tells her she misses her then says her favorite part is when she belts and says it’s so strong. She says it’s crazy and she was great and looks gorgeous. Pharrell says everyone needs to make some noise for her and they do. He says she really fought and showed a lot of confidence. He calls her a fighter. Next up is Team Blake’s comeback artist. Blake says he brought back someone he believed in since day one and he brought back Nadjah Nicole. She’s doing Diana Ross’s Upside Down and her upper register is amazing.

Team Blake’s Emily Ann Roberts is next. Blake had a cake for the country artist’s 17th birthday at rehearsal. Tonight, she’s singing In the Garden by Charles A Miles. Alan Jackson has covered the religious classic as has Anne Murray and Elvis. It’s pretty. Gwen says she’s one of her favorites on Blake’s team and says she likes her sparkly boots. She says she’s pure and honest with good instincts. Adam says it’s nice when you can enjoy a moment in its purity and not think about the competition. He says it’s staggering the level of talent on this show.

Blake says she has the voice of an angel. He says she just walked out and laid her heart and who she is as a human for America to see and that’s what makes her a great artist. Next is Team Pharrell’s Mark Hood. He’s doing Justin Bieber’s What Do You Mean? He’s put his own twist on it and really works his vocal range. Pharrell is up dancing while he sings and the crowd goes nuts. Gwen says she’s crying again because he’s so good. She says he’s one of her favorite because of his personality and all that talent. She says she loves him.

Adam says it was awesome and he can do anything. Blake says he knows he did something awesome and says he had to close his eyes because of the lights. He says Mark always sounds amazing. Pharrell gets the crowd on their feet for Mark then says listen to that. He tells Mark is was unbelievable and knows people at home are standing up for him too. Last of the night is Team Blake’s Barrett Baber the high school teacher. He talks about singing at a pep rally and how great the students are. He’s doing Lee Brice’s I Drive Your Truck.

He does a great song like he’s a country star already. Blake and Pharrell are both on their feet at the end. The crowd loves him too. Gwen says he gives so much when he performs and says it’s a lot and she’s a fan of him for that. Adam says he pitched a fit over not getting him and still misses him. He says what Barrett does is powerful. He says he’s a fan of his. Blake says he amazes him and says the only other artist he knows that gives that much when he performs is Garth Brooks then says it was great. Voting opens now and the results show is tomorrow when half of the roster will be slashed down to the top 12.