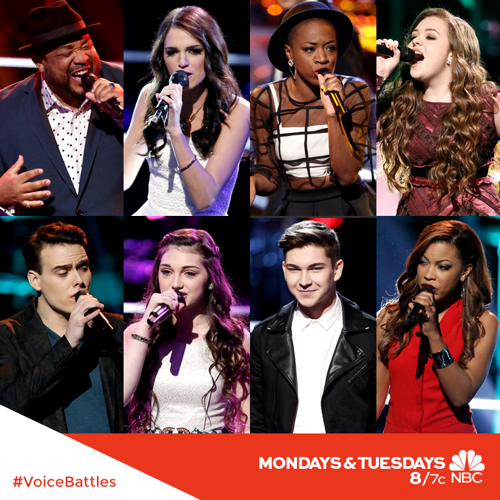 Tonight on NBC the Emmy award winning music competition The Voice returns with an all new Tuesday March 16, season 8 episode 8 called, “The Battles, part 4,” and we have your weekly recap below. On tonight’s episode, the “battle rounds” continue and the coaches enlist the help of the music industry’s top recording artists to offer their knowledge and skills as advisers.

On tonight’s episode as per the NBC synopsis, “the final round of The Battles air in this four part section of the eighth season before the Knockouts air.”

Tonight’s season 8 episode 8 of The Voice is going to be exciting. We’ll be blogging it right here for you. In the meantime hit up the comments section and tell us how excited you are for season 8 of The Voice.

It’s the finals of the #VoiceBattles and only Pharrell has a steal left. Blake tells Pharrell they need to team up and make sure that Adam doesn’t win. The next battle is Jeremy Gaynor versus Rob Taylor from Team Christina. She and Nick Jonas meet with them and tell them they’re going to be performing Animals by Maroon 5. It’s a little homage to Adam Levine. And it’s a great song. She decided to go this route instead of the obvious soul number you would think for them.

Nick and Christina give them some notes and they encourage them to put a soul spin on it and not make it a cover and not like Adam. They rehearse with the band and Nick says he can tell they studied. Now it’s battle time and Christina says they made it their own. She gives them some final notes. Now it’s battle time. Carson introduces them and it’s on. Adam is into it from the get-go. I have to say this one is hard because I hear this one all the time so it’s so fresh. Maybe if it was chicks singing it…

It’s hard to separate it when I just compare them to Adam and I love the Maroon 5 version. Their falsettos and upper registers are really impressive, but it’s just not for me. The audience seems to dig it. Adam says he’s happy that they sang it and says it’s a pain in the ass to sing and says it uses all of his range and is a struggle to sing. He says he turned for both of them in the blinds but thinks this one went to Jeremy. Blake says it was intense and tells Christina she can’t go wrong with either one.

Christina says the winner of the battle is Rob. Jeremy sweetly congratulates Rob as he collapses to the floor. Christina says she wants to explore his capabilities. The next battle is Team Pharrell between Noelle Bybee and Sawyer Fredericks. They meet with Pharrell and Lionel Richie. Pharrell says he wants them to sing Have You Seen the Rain by Creedence Clearwater Revival. They tell them they have to learn to shine together. They get notes then work with the band.

They are doing the song as an indie sort of number. They get their final notes and then it’s battle time. Carson introduces them and the two teenagers come out to sing it out. Sawyer plays his guitar so beautifully. Their voices are really nice together. I like Sawyer better, he just seems ethereal and otherworldly. Adam says they were singing together with care for the other person and it showed artistry. He says he has to go with Sawyer because it boggles the mind.

Blake says they both have pretty hair but Blake says he goes with Noelle. Christina says Noelle’s voice is like an angel and says Sawyer can do what can’t be taught. She says he has a gift that’s well suited in Pharrell’s hands. Pharrell says they did well and says Noelle did well hitting the high notes. Pharrell says Sawyer is so good and has no ego and embraced his partner for the benefit of the performance. Adam says he doesn’t envy him. Pharrell decides to go with Sawyer as the winner.

We see a clip of the Christina battle of Koryn Hawthorne against Vance Smith where she chose Koryn. Then we see a clip of Blake’s battle of Bay Brooks versus Brooke Adee. He chose Brooke as the winner. Then Adam had Bren’nae DeBarge face off Lexi Davila. Adam chose Lexi as that winner. Blake and Meghan Trainor take a selfie as they wait for their last battle duo – Corey Kent White and Jacob Rummell.

They’ve decided the young men will sing I Want Crazy by Hunter Hayes. They give them a lot of notes to address Corey’s breathiness and Jacob’s nerves. Meghan tells Corey not to close his eyes. He’s nervous because he’s used to having his guitar. They work with the band and give them notes. Blake says it’s a tough song because it’s wordy and high. He says whoever works the hardest will come out ahead. Meghan flirts shamelessly with Corey.

It’s battle night. Carson introduces them and it’s on. Corey is wailing and it’s nice. But Jacob has such a unique voice. This song seems much more suited to Corey than Jacob but the kid blows it out. Corey has the sexy factor but Jacob’s sound is wild. The guys hug it out once they’re done. Adam tells Pharrell he should steal one of them. Christina says it was fun to see Jacob go from Bruno Mars to country and says he has a great range. She says Corey was a strong consistent performer.

Christina says she thinks Corey is more Team Blake. Pharrell says Jacob’s voice is unique but Corey is more Blake. Adam says Jacob doesn’t have the face of a killer but says the transition shows how he can do anything. He says the song was in Corey’s wheelhouse while Jacob moved across genres and killed it. Blake says the song leans more pop than country and says Jacob can have fun with any song and is great to be around. He says they both did great and worked hard.

Blake says it was dead even but chooses as his winner – Corey. Pharrell promptly steals Jacob. Blake is excited that he got picked up and Pharrell goes to greet Jacob. He’s excited that he got picked up for the knockouts. Blake tells Pharrell he’s going to love working with Jacob. Adam agrees that he’s really good. Corey says he’s so glad that Jacob got stolen and is going with him to the knockouts.