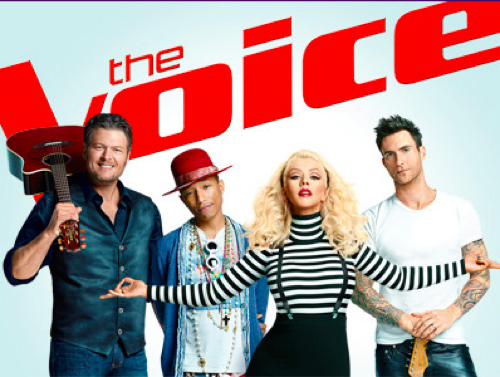 Tonight on NBC the Emmy award winning music competition The Voice returns with an all new Tuesday March 31, season 8 episode 13 called, “The Road to the Live Shows” and we have your weekly recap below. On tonight’s episode, top moments from Season 8 are revisited. Included: previously unseen footage of the coaches.

In the last episode of The Voice, the third part of the “knockout rounds” took place. Did you watch the last episode? If you missed it, we have a full and detailed recap right here for you.

On tonight’s episode per the NBC synopsis “Re-live the best moments from the season so far during this original, jam-packed special chronicling the journey of the top 20 from the blind auditions to next week’s live playoffs, as well as never-before-seen footage of the coaches Adam Levine, Blake Shelton, Christina Aguilera and Pharrell Williams.”

Tonight’s Live season 8 episode 13 is going to be exciting. We’ll be blogging it right here for you. In the meantime hit up the comments section and tell us how excited you are for season 8 of The Voice.

On #TheVoice, we take a look back at the artists in advance of the live voting rounds that start next week. #TeamBlake is up first tonight for the extra look. We first see Sarah Potenza from Nashville with her big Janis Joplin-sounding voice. We see during her rehearsal Matt McAndrew, last season’s winner, came by. Blake says there is no one like her in this competition or the world.

Next is 16 year old Brooke Adee who Blake and Adam both turned for at the start. Blake said she was a future star. Next is 20 year old Corey Kent White who has been playing the college circuit. Corey chose between Pharrell and Blake but went with the country mentor he wanted. Blake says he’ll be around for awhile as a country artist. He says Corey blends artful country sounds.

Next up is 28 year old Meghan Linsey who opened for Blake when she was in a band but is now exploring soul music, her true roots. Blake stole Meghan when he had the chance. He says he was lucky to get her in the battles and calls her a dark horse. Adam says Meghan is ridiculous and could win this. Last on Team Blake is indie rocker Hannah Kirby who was stolen from Blake by Pharrell and then he stole her back. He’s happy to be going live with her.

#TeamBlake is ready for the playoffs and Blake says everyone is jealous and he has the team to beat.

Next is #TeramXtina. She says it’s the strongest team she’s had. She first got Rob Taylor who left music school to take care of his mother after she had a stroke. He’s got that strong falsetto and big voice. 32 year old Kimberly Nichole started on Team Pharrell. When he gave her up, Christina snapped her up. She says she wanted her since the blinds. Kimberly prevailed in knockouts as well.

23 year old Sonic is up next and she has struggled with the hearing loss in one ear that has made harmonies a challenge. High school junior Lexi Davila turned two chairs and chose Adam over Blake. But then when Adam let her go in knockouts, Christina scooped her up and called Adam dumb. She says she has the chops and is a real gem.

Now it’s #TeamAdam. He says they are the triumphant underdog. First we see 35 year old Tonya Boyd-Cannon who is a prison choir director. Adam says she was put on this earth to sing and is unforgettable. He was surprised when she chose him. Next up we see Joshua Davis. Adam says he loves him. Next is 17 year old student Nathan Hermida, a self-professed nerd. Adam worked to get him out of his shell.

19 year old Deanna Johnson is back again. Last time she didn’t turn any chairs then this year turned all four. Adam says it was great that she came back and addressed their notes and did so well. Last on Team Adam was Blake’s to start with – Brian Johnson. Adam was wowed with Brian but he chose Blake. Adam stole Brian in the knockouts. He says Brian’s voice is ridiculous.

Adam says his team is strong with a lot of different flavors. Next is #TeamPharrell who calls his artists the Furious Five. Blake says they’re the biggest threat.

Next is Caitlin Caporale who wanted Christina, but her team was already full. Caitlin killed in the knockout rounds. Next is Lowell Oakley who wants to be a new age crooner. Pharrell says Lowell’s voice is “other.” Pharrell kept him in the knockouts despite a huge contender performance. Next is high schooler Koryn Hawthorne. The coaches flattered her and she went with Christina originally.

Pharrell stole her in the knockouts to take her to the life playoffs. Pharrell says his artists are making the rules up as the go and says they are all individuals.

Now we see some behind the scenes stuff with Adam mocking Blake’s sales pitches. Christina says the other coaches make her think she’s on another planet. Pharrell says the show is a lot of fun. We see Adam calling Blake an old fart and Blake mocking Adam’s clothes. We see Meghan Trainor joking with the contestants and teasing Blake about his terrible middle name Tollison.

Nick Jonas says if they’re nervous to picture everyone but Blake naked. Pharrell dies an imitation of a goat being defibrillated. Christina says she wants to see Blake in stilletos and Nate Ruess says he’d be as tall as Chewbacca.