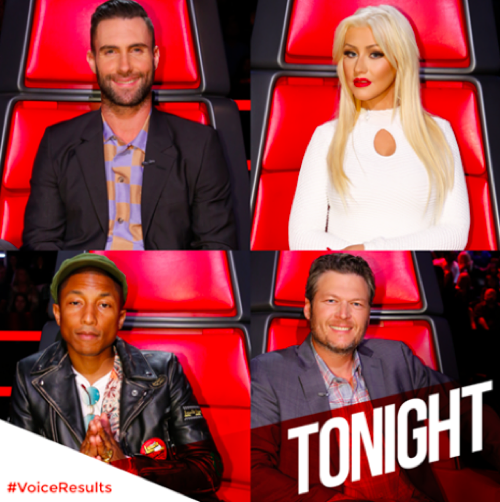 Tonight on NBC their Emmy award winning music competition The Voice returns with an all new Monday April 21, season 8 episode 20 called, “Live Top 10 Performances” and we have your weekly recap below. On tonight’s episode, two contestants will be eliminated.

On the last episode of The Voice, the top 10 performed and the judges all agreed that everyone did an amazing job. Did you watch the last episode? If you missed it, we have a full and detailed recap right here for you.

On tonight’s episode per the NBC synopsis “America’s votes will be revealed to determine which two artists will be eliminated from the competition. Carson Daly (“TODAY Show”) hosts.”

Tonight’s Live season 8 episode 20 is going to be exciting. We’ll be blogging it right here for you. In the meantime hit up the comments section and tell us how excited you are for season 8 of The Voice and who do you think will be going home tonight.

#VoiceResults is giving results from last night’s show and will feature Reba McIntyre and a performance from Team Adam. But first up is Pharrell and his team made of Koryn Hawthorne and Sawyer Fredericks. They’re doing Gavin Degraw’s I Don’t Want to Be. Pharrell sounds great with them. All of the top 10 come out onto the stage to reveal some of the results. Carson announces the first two artists that are safe and on next week’s live show. These are Koryn Hawthorne from Team Pharrell and Corey Kent White from Team Blake.

The other eight come back to the stage now for more results. Carson is announcing two more that are safe and moving on to next week’s live show. From Team Pharrell, Sawyer Fredericks is safe. That means both of Pharrell’s people are in the top eight. Next is from Team Christina and it’s India Carney. She screams in joy. All but Team Adam are now represented in the next live show.

Next is Reba McIntyre performing live singing Going Out Like That. Reba is amazing, as always. Even if you don’t like country music, you’ve got to love Reba. All the coaches are on their feet, Christina’s doing little finger gunshots and Blake is bowing to her greatness. Carson then calls back the six remaining artists to reveal two more that are saved by America and moving on.

Adam now performs with his two finalists Joshua Davis and Deanna Johnson. They do Steve Miller’s The Joker – wow, that’s an old but great song. Adam starts and hits the falsetto notes. Adam and Joshua both play guitar. Blake sings along with them. Then Adam goes into a really cool electric guitar solo that’s incredible. They sounded so great together, so smooth and it’s funny that Deanna has the deepest voice of all three!

Carson then calls out the final four – three will face off against each other and one of them will be safe again. From Team Blake, it’s Hannah Kirby. She hugs Rob Taylor and the others then goes to give Blake a hug. All of Blake’s people made it through which means Rob, Deanna and Joshua will now face off. This also means that Adam could be eliminated tonight if one of his people doesn’t get the live save from America.

Christina says Rob is an amazing and important part of the competition and says he shows a different size every time he goes onto the stage and says it’s his dream. She says she’s shocked he wasn’t voted safe. Adam will lose at least one no matter what. Adam says he’s been all over it and says his team is struggling but he doesn’t think they’ve seen the best from them. He says it’s tough fighting for their lives every week but shows a lot of resilience.

First up is Rob Taylor singing Otis Redding’s Sitting on the Dock of the Bay. (one of the best song’s ever IMHO). It was nice, but Rob’s no Otis – I don’t think that was enough to keep him in the competition. We’ll see. Christina says Rob is beyond and is such a special talent and says it’s not about song choice because he sings from his heart and soul and says he deserves to be there. She says she wishes people could spend time with Rob like she has and says he’s remarkably talented.

Next up is Deanna Johnson singing for her life. She’s chosen Help Me Make It Through the Night by Kris Kristofferson (Sammi Smith covered it nicely too). Wow she’s blowing it out – she sings so strong. That was very well done. It was moving and she sang better than I’ve ever heard her do and really busted out the power. It was flawless. Adam says when she has her back against the wall, she does her best work and says she blew him away. Adam says if you’ve ever had to tackle insecurity, you should vote to save this sweet girl.

Joshua is the last to sing and does I Won’t Back Down by Tom Petty. He does a great job but it’s just meh for me. He has a nice voice but there’s nothing remarkable about him IMHO. Adam tells him it was a good song choice and says Joshua works so hard and he feels a kinship with him. He says he thinks all three are amazing and says he loves Joshua. They bring out Rob and Deanna on stage as well.

Christina says she loves Rob and says he’s one of the greatest guys ever. Adam says it’s hard when you’re fighting to stay on the show and can’t imagine how hard it is. Adam says Deanna gave her best performance ever and says Joshua killed it and also has what it takes. Carson says the instant save twitter window is closed and is ready to announce which is safe and which other two will leave.

The save goes to Joshua Davis. That means Adam is still in the competition and that sends Rob Taylor and Deanna Johnson home! Come back next week for the live top 10 competition!