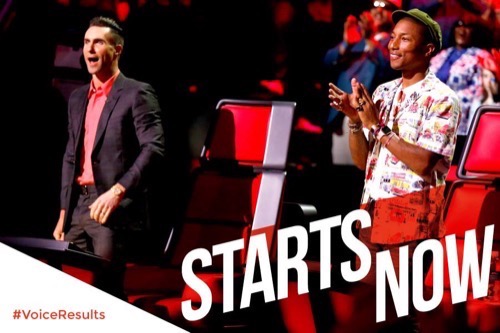 Tonight on NBC the Emmy award winning music competition The Voice returns with an all new Wednesday April 8, season 8 episode 16 called, “The Live Playoffs, Results” and we have your weekly recap below. On tonight’s episode, top performers advance in a playoff-round results show.

On the last episode of The Voice, the remaining artists performed in front of coaches Adam Levine, Blake Shelton, Christina Aguilera and Pharrell Williams for their chance at a spot in the Live Shows. Did you watch the last episode? If you missed it, we have a full and detailed recap right here for you.

On tonight’s episode as per the NBC synopsis “the top 20 artists await America’s vote. The top two performers from each team will move through to the live shows and the coaches, Adam Levine, Blake Shelton, Christina Aguilera and Pharrell Williams will save one remaining artist from their team. Carson Daly (“TODAY Show”) hosts.”

Tonight’s Live season 8 episode 16 is going to be exciting. We’ll be blogging it right here for you. In the meantime hit up the comments section and tell us how excited you are for season 8 of The Voice.

Opening tonight’s playoffs of “The Voice”, both old and new voices came together before the final reveal on who’s going into the finales. And what a tribute it was to those who won’t be lucky enough to move on.

Wiz Khalifa and returning season seven alumni Chris Jamison sang the rapper’s latest hit “See You Again” from the upcoming Fast & The Furious & soundtrack. And with song about a departing friend, it was fitting choice for tonight’s results show. At the end of the day each of the contestants auditioned because of a dream and sadly for some they’re hopes are bound to be crushed during eliminations.

But there’s always tomorrow. And even if this season didn’t pan out for them – there is always next season. (Or whispers American Idol whispers)

First up was Team Blake and they wowed the audience with their rendition of The Staples Singers “I’ll Take You There”. And unfortunately by the end of the song – Blake had to actually come to a decision about who to take with him into the finales. You see America chose to save Corey and Meghan which meant Blake had to choose between Hannah, Brooke, and Sarah.

And besides the already tough decision, sending someone home isn’t easy. Especially for a guy like Blake who has gotten to know all of them on a personal level by now and so right before he announced who he saved – he looked torn up about what he was about to do.

Then, like a champ, he announced Hannah’s name. So even if he might end up regretting it there was really no going back after that.

After Team Blake, there was Team Christina. And their song selection was Madonna’s “Like A Prayer”. Like before it was a great choice. It had the audience’s complete attention and their involvement but all the same the dice had been cast. America only has very short window in which to vote and most of them had did that before Team Christina even hit the stage.

So both India and Kimberley have been safe for quite some time. And that’s all thanks to the voting. America appears to love them and hopefully that will follow them into the next episode.

Lexi, Sonic, and Robb on the other hand weren’t so lucky. They had to depend on Christina and she chose to her only remaining guy into the finales.

Though, as it looked up to that point, no one (American voters included) seemed to want to go into the next round with a full female trio. America took the choice out of Blake’s hands and later Pharrell’s when they chose to save Sawyer. And as for Adam he didn’t necessarily have a choice in the matter – he only had two girls on his team.

Team Pharrell chose to sing “Say Something” which as many of us know was a big hit for both Christina Aguilera and A Great Big World. So that was a nice tribute to a fellow judge. And then when eliminations rolled around for them, America chose to save Sawyer and Mia Z. So with his one remaining vote, Pharrell picked Koryn.

As for Team Adam, they sang Rhianna’s “Diamonds”. And out of the five, America chose to save only Dianna and Joshua.

And with barely any time left in the show to tell the rest of them how much he cares about them, Adam kept going on about his gut until eventually his gut via Adam’s mouth announced Brian’s name.