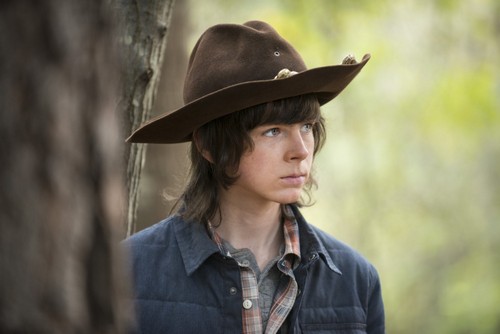 Who will die in Season 6 of The Walking Dead? The Walking Dead spoilers are already rolling in, even though the highly anticipated Fall 2015 premiere is not scheduled to air on AMC until Sunday October 11. As always, TWD fans are in for another season of intense zombie battles – and of course a couple of casualties. Season 6 hasn’t even begun yet, but spoilers for the finale have been leaked on the internet and indicate that two main characters will be killed off, and another character will lose an eye!

The Spoiling Dead Fans official Facebook page has leaked some juicy TWD spoilers about the Season 6 midseason finale – per the website not one, but two main characters will be killed off, and another character will lose an eye. The Spoiling Dead Fans page teases that there will be a bloody massacre during the midseason finale – Rick Grimes, Michonne, Father Stokes, Carl Grimes, Jessie, and her son Sam all wind up trapped in an old house and are surrounded by walkers. They attempt to make a getaway and mayhem ensues.

According to The Walking Dead spoilers, Jessie’s son Sam is eaten by zombies – and in a desperate attempt to save him, she perishes as well. At some point during the madness, Rick chops off Jessie’s arm and gunshots are fired – which cause Carl to lose his eye. Any one who has read The Walking Dead spoilers can tell you that at some point in the comic books Carl does lose an eye – so it looks like the writers are staying true to the story in that aspect.

So, are you as excited as we are for the Season 6 premiere of The Walking Dead? What do you think of the latest spoilers? Share your thoughts and theories in the comments below!