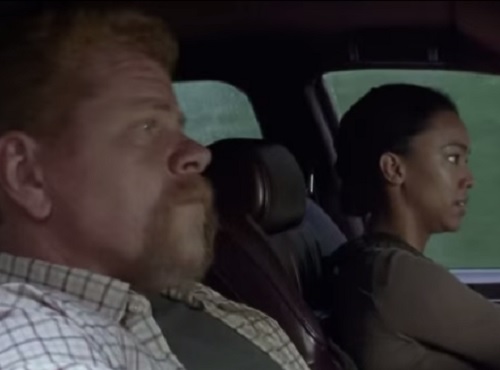 Thanks to AMC’s efforts to launch the The Walking Dead companion series, ‘Fear The Walking Dead,’ we have some juicy spoilers for TWD season 6. Scott Gimple and Greg Nicotero revealed some major details from the upcoming sixth season of TWD, including breaking walker records, the confirmation of Morgan’s story, and the long-teased arrival of The Wolves.

A special edition of ‘Talking Dead’ brought Chris Hardwick back to our lives – we missed him like Daryl missed spaghetti – along with ‘The Walking Dead’ showrunner, Scott Gimple. The TWD heads confirmed some details fans can expect in the sixth season…

So. Many. Walkers. There will be a multitude of walkers not once but at least twice in season 6 of ‘The Walking Dead.’ Scott confirmed the premier of TWD would set new records for the number of walkers seen on the show. Gimple also stated that episode 9 – the show’s mid-season premiere airing in February – would break the record for a second time. That is no surprise, as CDL’s coverage and spoilers have noted more walkers present on set on several occasions.

Most fans are thrilled with the return of Morgan and want to know how he turned into zombie-slaying Jedi after making his grief-induced-crazy appearance in ‘Clear’ during season 3. Scott promised that fans will get Morgan’s story and an explanation of his new Zen-like attitude.

The Wolves, originally thought to play a smaller part in the first part of season 6, will play a bigger role in Rick and the group’s lives. Thanks to eagle-eyed fans sharing on platforms like The Spoiling Dead, images of Benedict Samuel – the Wolves pack member who made his debut in ‘Conquer’ – show the still unnamed character on set. Lots of gunfire has been heard over the past few days, so we can expect a showdown of epic proportions. Gimple also explained the Wolves have a “code” and a “process” that the group follows.

Rick, Pete, Reg and that final season of season 5 of ‘The Walking Dead’ was also cleared up. Many fans had a theory that Rick didn’t actually shoot Pete, but put the bullet in already dead Reg’s head to prevent him from turning. Scott dispelled the notion and confirmed Rick shot Pete.

Daryl’s status was also discussed. As fans know very well by now, any character could be killed off at any time. No one is safe, and while Norman Reedus’ growing popularity has women’s ovaries exploding with lust, fans could see Daryl’s death at any time. Scott did jest, “If that happened, Norman [Reedus] would take me down.”

Scott Gimple also confirmed at least one flashback during season 6 of ‘The Walking Dead’ and fans have been hungry for the details, but rumors went into overdrive when Michael Rooker, who played love ‘em or hate ‘em Merle Dixon, was spotted in Georgia. Fans reportedly saw Rooker on the TWD set and thought he might have been in costume. Could Merle Dixon return to season 6 of ‘The Walking Dead’ in the teased flashback episode? Possibly, but when pressed about plans for Merle’s return, Michael told ComicBook.com, “Not that I know of.” Of course, he also gave a coy smile when insisting he’d never lie.

What are your predictions for season 6 of The Walking Dead? Who will die and what new villains await Rick and his group?