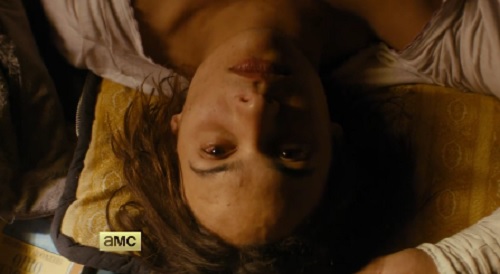 Fans of AMC’s wildly popular zombie series “The Walking Dead” have been counting down the days until the spin-off’s big premiere this summer. “Fear The Walking Dead” spoilers indicate that the 90-minute series premiere will air on AMC on Sunday, August 23. But, you don’t have to wait until Sunday to see the first three minutes – AMC has released a spoiler video on their official Facebook page, and we can’t get enough of it!

In the “Fear The Walking Dead” spoiler video, Frank Dillane (from Harry Potter) plays the part of lead character Nick Clark. Clark wakes up in what appears to be some sort of drug den, and he seems to be high as a kite or really hungover. Clark stumbles around the abandoned church looking for a woman named Gloria. He follows a trail of blood downstairs and finds Gloria in her underwear eating some poor guy.

According to “Fear The Walking Dead” spoilers, the spin-off is set to take place in Los Angeles – before the zombie apocalypse, before TWD’s Rick Grimes wakes up from his coma on the East Coast. The star studded cast includes: Frank Dillane, Elizabeth Rodriguez, Cliff Curtis, and Alicia Debnam-Carey. Judging from the spoiler video released on Facebook today, “Fear The Walking Dead” is going to be just as intense and addictive as its predecessor “The Walking Dead.”

Posted by Fear the Walking Dead on Thursday, August 20, 2015