‘The Walking Dead’ Season 5 Spoilers: Who Dies in the Finale Episode – More Than One Death? 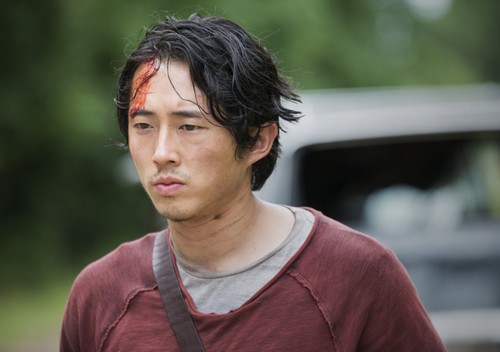 The Walking Dead season 5 finale spoilers predict and discuss who will die in the final episode. It states it in the title, but in case you missed it… this post contains spoilers for The Walking Dead. Those who have not read the graphic novel version – beware of spoilers. We’ve already said goodbye Bob, Beth, Tyresse, and Noah, on season 5 of ‘The Walking Dead,’ but more death awaits in the final episode. Gale Anne Hurd, TWD show producer, promised there would be more surprises and shocking twists in the season 5 finale. While on Chris Hardwick’s amazing post-TWD talk show, ‘Talking Dead,’ Hurd stated confidently, “There will be blood, and not just walker blood.”

Favorite Principal Character Deaths: Gale’s statement could mean the death of the pampered citizens of Alexandria, but it could also mean Rick and our group favorites are at risk. With the finale being increased to 90 minutes, it promises to be packed with conflict as Jessica gives Rick her blessing to kill her abusive husband, Pete. There is a strong possibility that Pete will die. Thanks to a sneak peek, viewers are teased with Carol pulling her knife on Pete while delivering one of her casseroles. It’s a deliciously dark moment for Carol’s character who has evolved into one of the shows respected badasses. Rick, Carol, or maybe Jessica finally taking matters into her own hands – it’s a safe bet Pete will die.

Daryl Dixon fans have long threatened to riot if Norman Reedus’ character dies. However, TWD series creator, Robert Kirkman, isn’t fazed by the threat. In fact, Robert felt like it was a dare, telling reporters at the San Diego Comic Con, “The Daryl thing–that fan reaction is going to get him killed. I feel like it’s a dare. Like, ‘Oh, really? You’re gonna riot? We’ll see…we’ll see. No one is safe.”

Alas, during the second to last episode of The Walking Dead, Daryl and Aaron are closing in on someone wildly dangerous and demented. The duo stumbled upon fresh body parts scattered in the woods. A short distance away, a woman’s body was tied to a tree; left for walkers to feed on while she was still alive. Daryl confirms to Aaron, “This just happened.”

Comic book fans are also worried about Glenn. During a previous episode, the loveable character held up a baseball bat. It may seem rather innocent to those who haven’t read the books, but those who have immediately thought of Negan. Negan is a wicked and disturbed character who make The Governor look like a Disney villain. It’s a bit early based on the timeline of the books the show seems to be sticking to, but you can’t deny the foreshadowing of Glenn’s death.

The “W” Mark: Most fans who have read the comics have picked up on all the references to The Wolves. From the warning spray painted on the wall at Noah’s old home town – WOLVES NOT FAR, to the WOLF FIGHT emblazoned on the back of the comic book Carl discovers in his new home in Alexandria, it’s undeniable there is something to the presence of wolves. TWD fans are also seeing increasing amounts of walkers bearing a W carved into the skin of their forehead.

Spoilers from the comics will know this likely the introduction to a hostile group of survivors who make an appearance in Kirkman’s written graphic novels – The Scavengers. The group is led by a lunatic named Derek who kill without question and loot to survive. Their goal – kill Rick Grimes. Lucky for TWD graphic novel Rick – Andrea is still alive at this point and saves him with her sharp shooting skills. Andrea may be long gone in the TV version, but let’s not forget Sasha and her need for blood at this point.

Morgan: This character saved Rick’s life in the beginning of The Walking Dead and has made a few appearances in the show. When we last saw him, he had tracked Rick to the church where Father Gabriel began his shame spiral. He found the note Abraham left Rick with an outlined path to Washington. Beyond that, it’s unclear where Morgan wandered.

Some fans theorize that the Ws marked on the walkers’ heads is actually an M, signaling Morgan’s return. It’s a good theory, but one could reason Morgan has been ruled out by the letter marked on the woman’s head who was tied to the tree and discovered by Daryl and Aaron. We see the woman turn as Daryl inspects her. It’s highly doubtful Morgan would tie anyone to a tree – leaving them to be feasted on while still alive. BUT…

Norman Reedus told ET Online that a character turns out to be the opposite of how they present themselves… “There’s something that’s going to happen — and I can’t tell you what it is — but somebody turns out to be not who you think they are, and it’s an interesting turn of events.”

Could Morgan have turned into a sick, twisted killer? Doubtful, but Robert Kirkman did state during an interview with EW the show has “big plans” for Morgan. The character has been sparse throughout season 5, but maybe he will be a key player in the season finale. What do you think will happen in the season five finale of ‘The Walking Dead’? Let us know what your predictions are in the comment section below!