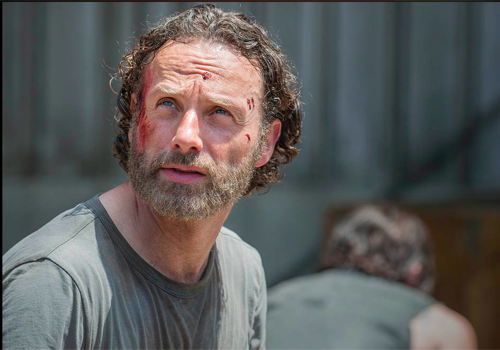 The Walking Dead Season 5 spoilers address the finale episode and the sad fact that Alexandria might be beyond saving. In a world where zombies are real, it is hard to not allow for the impossible. Alexandria is in some seriously deep trouble after Rick defied Deanna and went after Mr. wife-beater Pete. That knock down, drag out fight led to a showdown in the streets of Alexandria and a shocking turn of events by Michonne.

As The Walking Dead Season 5 finale is fast approaching, one of the biggest questions is whether Alexandria can survive the onslaught that is surely coming. Rick is riding the edge of sanity it seems lately and that slippery slope has put the group at odds with Deanna. Deanna seems to stand as the clear leader in Alexandria, but one gets the idea that this could change in the blink of an eye if Rick chose to do so.

In the preview, Carol confronts Pete as well and it seems as though she makes her point quickly and powerfully. Will the pendulum of power swing towards the Rick crew in the season 5 finale or will they finally find peace with the Alexandrians? Nobody knows for sure.

The one thing that would be a total disaster would be the destruction of Alexandria itself. The society they have built is quite wonderful and whether it is occupied by Rick and company or the Alexandrians, it seems a waste to let it fall. Destroying the place makes absolutely no sense at all.

Some things have to actually happen to save Alexandria in it’s current form. For one, Rick needs to start communicating with Deanna in a different way. She is set in her ways and needs to be shown what has happened. Why not share with her the story of Terminus? Why not share the story of the Governor? This might shed light on why she needs to be a bit tougher on the current residents and the people she lets in.

Although saving Alexandria is possible, it seems unlikely. As great as those safe walls are at keeping the group in a better place, there is not much drama in it compared to running from zombies. I have a feeling that the group will be on the run again soon. Come back to CDL for more of The Walking Dead spoilers, news and updates.