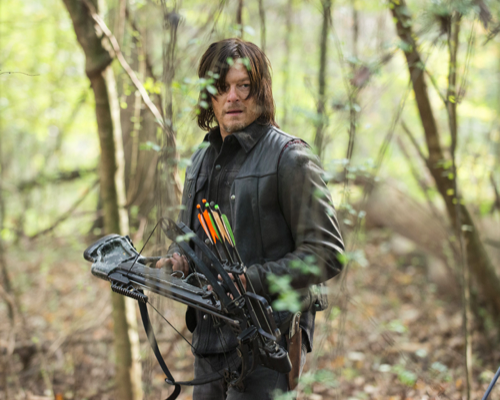 The Walking Dead Season 5 spoilers provide some insight into what to expect to unfold in Alexandria during the remaining episodes, violence and death are predicted! If you didn’t feel brutalized by this most recent episode of “The Walking Dead,” well, then maybe you need to check your pulse. Not only did we see some serious guts and gore, we also lost one of our new characters who was just starting to show some depth. Isn’t that the way it seems to go on TWD?

Noah was just starting to settle in at Alexandria and show some character development, then munch munch munch, he’s gone. It was gruesome.

So what can we expect next? Obviously, the whole community of Alexandria will be very upset over the death of Aiden, and just imagine what Mama Mayor Deanna will do. After Father’s Gabriel’s crazed warning, Aiden’s death will undoubtedly make the Mayor question the newcomers.

Anyone who hasn’t been able to see that the addition of our survivors to the mix at Alexandria is a recipe for disaster has just not been paying attention. The Alexandria residents are too comfortable and seem to have their own little secrets (who here thinks Pete the Drunken Doctor and Abuser is going to be part of a blow up?). When compared with our ragtag bunch of survivors, it’s like mixing fire and gasoline and something is about to happen.

Nicholas: So we all know that Nicholas the Coward and Aiden were responsible for a lot of the death and mayhem this past week. Justice would hold that upon returning to the community, Nicholas will be tried and found guilty of getting Noah killed and possibly even abandoning Aiden. This is the world of “The Walking Dead” though, and Nicholas has been a long-standing member of the Alexandria community. It is doubtful that he will admit to what happened and will certainly concoct a story that throws all blame on Glenn and Eugene.

Who will Deanna believe? It is almost certain that her grief over Aiden will not allow her to believe any of the newcomers. Her comment to Maggie about the newcomers taking over roles of leadership showed that she is already questioning her decision to bring them into the fold. Now her son is dead.

Eugene: Eugene showed that even though he is an admitted coward, he has guts and he has loyalty. He was not the same caliber of coward that Nicholas has proven to be since Nicholas showed that he had no loyalty. Eugene was not willing to leave Tara behind, and that shows more character than he has exhibited thus far.

What will happen next? With only two episodes to go, we are certain to see some serious conflict in Alexandria and it will boil down to a showdown in the final, extended-length episode on March 29. Keep watching…it’s going to be crazy! Come back to CDL for more Season 5 The Walking Dead spoilers, news and updates.