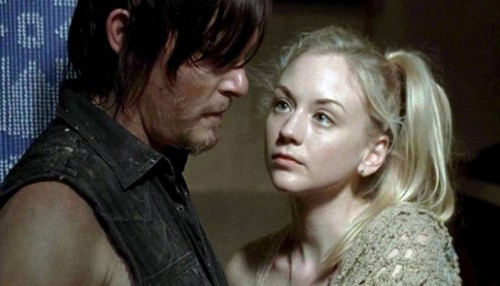 The Walking Dead Fans who have been shipping a Daryl Dixon and Beth Greene hookup might not be out of luck. Rumors are spreading that Norman Reedus and Emily Kinney are secretly dating. Did ‘The Walking Dead’ stars find love on set?

According to Us, Emily and Norman hit it off as friends first. The two met on set of ‘The Walking Dead’ and had a “connection” near the beginning of the show. While filming, Reedus and Kinney kept things platonic and friendly. Some fans of ‘The Walking Dead’ were proponents of their characters hooking up on the show, but Beth was killed off during a doomed raid of the hospital where she was being held. In fact, fans protested the character death with a petition that saw over 50,000 signatures and a campaign of sending spoons (a nod to Beth’s spoon collection) to producers voicing their displeasure.

Obviously, Beth Greene won’t make a miraculous recovery, but TWD fans who still want to see the chemistry of Emily Kinney and Norman Reedus might get their wish. The report states that Norman and Emily began hooking up after Emily left the show. A source revealed that after Beth was killed on the show, Norman reached out to Emily sending supportive text messages and attending her concerts. “He was one of the first to support her at her concerts when she was still on the show,” the insider said. Kinney had previously revealed that tidbit in a post-show interview saying, “Everyone reached out, though I remember Norman texted me—he’s so sweet.”

Norman must have made an impression. Most of the cast loves to take souvenirs from ‘The Walking Dead’ set, but Emily asserted she “isn’t collector,” but she does have one memento she treasures. “I have this turtle shell Norman gave me that I take everywhere.”

Don’t expect any public displays or confirmation of a relationship between Norman Reedus and Emily Kinney. While Norman is very affection with everyone, enjoying a penchant for licking his loved ones, the two are said to be keeping things very quiet.
What do you think of Norman Reedus and Emily Kinney dating? Is there any truth to ‘The Walking Dead’ costars dating? Sound off in the comment section.