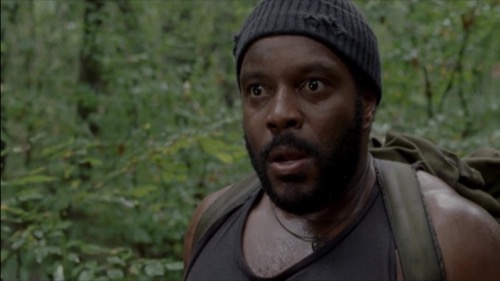 The Walking Dead Season 5 spoilers examines the death of Tyreese. To say the season five mid-season opener of The Walking Dead was different is an understatement of epic proportions. The artsy cuts from scene to scene and the flashbacks/hallucinations could have easily torched the episode. Fortunately, the effect was completely the opposite. The whole episode was completely covered with foreshadowing…every moment leading to another more important moment…. Every event setting up a future event.

Simply put, there was not a wasted moment on the show. That led to a bit of confusion at first, but all came clear in the end. This episode served two major purposes…to say goodbye to Tyreese through his own character’s lens and to set up the group for their next mission. The trip to Washington is back on and Tyreese is gone. Mission accomplished.

Tyreese’s passing was shocking to a degree because it came so quickly on the heels of Beth dying just before. Also, he seemed to be growing towards a larger role within the group. Still, Tyreese received a King’s goodbye by The Walking Dead’s standards. We got to see inside his soul as he passed and focus on the good in the man. We got to understand what made him tick. Most of the time when people die on this show, it is quick and unexpected. They are gone before you can process anything else. Then it is on to the next danger.

No doubt next week will move on to the next danger also, but at least he got a proper goodbye from the show and the characters. Reviews all over the Internet are applauding the layout and cinematography behind the episode. It was interesting to see the death of a character through the eyes of the character instead of through the eyes of their friends. This unique perspective allowed us to imagine what might be thought about in the closing moments of such a tragedy.

Although the death of Tyreese was reasonably clear, moving forward to Washington is a bit more murky. What exactly are they trying to accomplish by going there? They are clearly hoping for more people and a better life, but why Washington? Why not New York? Minnesota? Virginia Beach?

These questions are sure to be answered in the weeks to come. Perhaps the group will get to spend some time mourning their losses someday, but for now they have to keep moving and find someplace to breathe. Where they end up and how they get there is really the reason we watch. Can they survive another week? Come back to CDL for more of The Walking Dead spoilers tomorrow.